The Myths of Armored Personnel Carriers in Special Operations 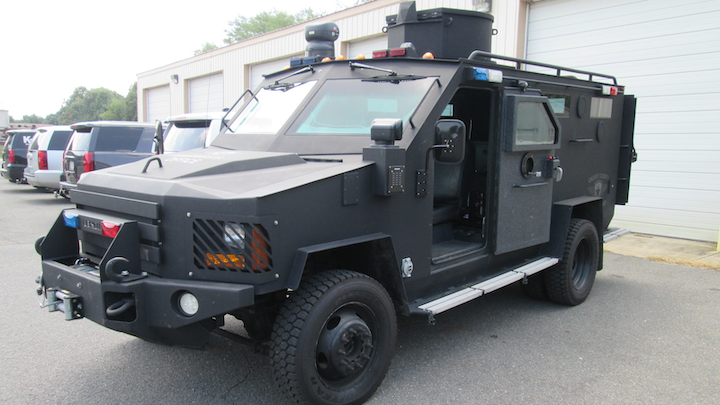 The Lenco Bearcat armored personnel carrier from Calvert County Sheriff’s Office (Maryland) is due for replacement. The office is taking donations.

Editor’s Note: This is an updated and corrected version of this article as of 10/21/19. The originally published version had a number of unintentional discrepancies based on an interview about a 2006 Bearcat and without inputs from Lenco. The updated article below has corrected those mistakes and represents a more accurate picture of the Lenco Bearcat capability today; a strong representation of APCs in law enforcement service.

Many among the public and some law enforcement officers don’t understand the full versatility offered by an armored personnel carrier or APC. These vehicles aren’t just for hostage rescue or making movies although that’s how they are most often portrayed. We spent some time with the Special Operations Division of the Calvert County Sheriff’s Office (Maryland) and got a tour of their facilities, vehicles and more. Their 2006 Lenco Bearcat G2 APC was part of that tour and we learned a lot. That said, much has changed since 2006 (updates where noted below).

This is false. While the APCs are highly armored and can withstand a lot, some munitions and ordnance can damage them. This would seem only common sense when you consider how many of our military personnel were injured while riding in APCs in combat zones. APCs provide a high level of protection but they are not tanks and it’s vital to know what your APC will and won’t withstand as you develop plans incorporating it for protection.

Myth: An APC can drive anywhere.

In the movies, we see them being driven over all sorts of terrain and through walls, etc. While it’s true that there is a lot they can handle and they have a significant amount of power, they can be easily bogged down in soft ground – at least they might have in 2006. The Lenco Bearcat we examined was the on-road version. In 2008, Lenco introduced the G3 version designed for off-road use, specifically equipped for softer ground. Today, per Lenco, most of the Bearcats being put into service are the G3 version.

Myth: Every APC has a bottom escape hatch.

The one we looked at was not equipped with one and the emergency services operators we talked with had mixed feelings about the potential benefit of such. They could see potential use for it as an insertion tool—delivering team members to locations with some minor level of concealment. On the other hand, any time someone is going in or out under the vehicle there is always the risk that the vehicle will inadvertently roll over them. And if 21,000+ pounds of vehicle rolls over you, you’re definitely having a bad day.

While APCs can be equipped and customized to suit the team need, not every APC has weapon lockers, munition launchers, etc. The Calvert Special Operations Team (SOT) Bearcat did not have either one. The team members take all their weapons with them when they load in for any type of operation. There is a turret on the top that turns 360-degrees and a team member could easily launch munitions from that position if they were properly armed and equipped. The SOT commander made it clear that the Bearcat was not intended nor used for weapons storage. It was a “grab and go” vehicle meant to be used for tip-of-the-spear ops where mitigated risk mobility was required. It is not a storage unit.

That brings the next point though. Every time the Bearcat is deployed there is a utility truck that is deployed in parallel. It IS a storage unit and holds all of the potentially required operational gear for the team. The utility truck has the ability to securely store all operational needs for the team on any call out. The Bearcat is typically maintained with a few commonly used items equipped and up to date:

Lenco has other options available for each Bearcat and those options have grown over the years. CCSO’s 2006 model is soon due for replacement. Service life is something else altogether for such vehicles.

A tough life of service

Some agencies measure service life by miles driven. Since the APC is a specialty-use vehicle, it might take decades to reach the number of miles a typical patrol vehicle would have when it gets replaced. But does that mean the APC hasn’t seen enough use to require replacement? No. Some agencies measure service life by “number of hours run” and an APC could run for hours upon hours even after being driven only a few miles, or having only been driven a few miles in that same time span. The point is that the hours of run time can be severely disproportionate to the number of miles driven. That can put the need for service or replacement of the engine far out of “normal” sync with the wear and tear on the transmission, gears, tires, etc. Some agencies simply default to basing replacement on model year. As an example, a 2006 Bearcat could normally have been scheduled for replacement after a ten-year service life. Whatever standard your agency uses, it should be documented and approved so the budget battle for replacement isn’t unnecessarily protracted.

Such budget discussions often bring about talk of other options besides replacement. One common question: can’t the engine simply be replaced? Yes, it can. All Lenco Bearcats can have their engine replaced. In fact, Lenco operates a full refurbishment program that can make the Bearcat “like new.”

With that in mind, the budget battle can be big. A basic Bearcat, as the example, costs just under $200K and that doesn’t include all of the emergency equipment, gas sensors, IR or thermal cameras, etc. The Calvert SOT Bearcat is equipped with a four-gas sensor and a thermal camera. Both are necessary given some of the potential hazardous environments they may be called upon to operate in. It also has a winch rated to pull its own weight (as any vehicle potentially driven off road should) and that winch can serve other uses besides vehicle recovery. A replacement APC should never be of lesser service utility than the one being replaced. Typically, if the money is being invested to replace such an asset, any desired upgrades should be aggressively pursued along with the purchase of the new vehicle. For example, if Calvert wanted to replace their Bearcat, during the vehicle specifications process would be the time to add on an IR camera or to make the vehicle positive pressure capable if such was desired.

While most often used on hostage rescue/barricade situations, the APC can also be used as a staging point for any given operation: deploying assets, deploying munitions, or deploying people. Are there others? If you go to the Open House at the Calvert County Sheriff’s office, you just might find the Bearcat, and some other specialty vehicles, on display and being used as community relations tools. Any sensitive capability items are covered or removed for such use. As with any high-risk mission unit, operational security is always a concern kept in mind. If your agency wants to use its APC in this manner, it’s good to remember that the vehicle is harder than any of the people climbing in and out. Children bumping their heads etc. becomes a concern and adequate personnel have to be staged with the vehicle.

Although the current Calvert SOT Bearcat isn’t equipped with such, APCs can have mounted roof-top systems for deploying team members to second and even third-floor windows or doors in a target structure. During Police Week a couple of years ago, such an APC was on display in Tent City and the number of kids who begged to climb to the top was startling. Of course, liability prohibits such activity without some pretty stringent safety protocols being put in place (not to mention all those liability waivers you have to get signed).

The APC can prove to be an invaluable asset for special operations in general. While no specific driving course is required, usually teams will set up their own and require it of the team members who may be tasked with picking up and delivering the APC to the required location. What that means is that every team member becomes proficient in driving the APC and using all of the equipment therein or on. While there are a number of ACP manufacturers in the U.S., one thing you should avoid is using decommissioned armored cars as APCs. It’s just not the same. Yes, it’s better than a patrol vehicle but there are large and glaring differences between what an armored car and an armored personnel carrier are designed to be used for.