A Montgomery County Police Department precinct was told on Friday by an official to remove a "Thin Blue Line" flag given to them by a local woodworker on National First Responders Day. 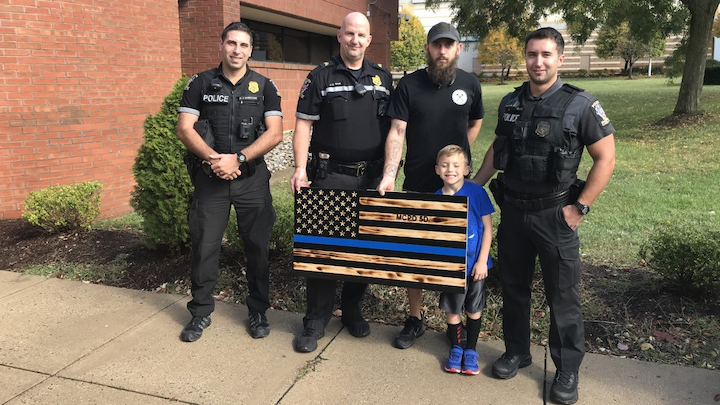 GERMANTOWN, Maryland -- A Montgomery County Police Department precinct was told on Friday by an official to remove a "Thin Blue Line" flag given to them by a local woodworker on National First Responders Day.

Montgomery County Executive Marc Elrich on Friday told the 5th District to remove the flag from display that was  gifted to them by woodworker James Shelton on Oct. 28, according to WTOP.

Shelton also created a similar flag with a red stripe and gave it to Montgomery County Fire and Rescue Station 31 in North Potomac.

Shelton made the piece of artwork with his young son and was just one of 50 woodworkers across the country who worked to create flags that showed support for first responders in their communities.

Shelton and his son posed for a photo with officers and the station agreed to display the flag.

Thank you to resident James Shelton, who presented Montgomery County 5th District officers with a wooden American Flag that he had made in recognition of National First Responders Day. The flag will be displayed in the 5th District Station. pic.twitter.com/kbAI32xHkY

Elrich argues that the Thin Blue Line Flag is the symbol of Blue Lives Matter, which some view as a direct rebuttal to the Black Lives Matter movement.

“The flag provides a symbol of support to some, but it is a symbol of submissiveness to others. Because it is divisive, the flag will not be posted at the 5th District nor in any public space within the Police Department,” Elrich said. “Under my administration, we are committed to improving police relations with the community and will immediately address any action that stands against our mission.”

Maryland Gov. Larry Hogan on Sunday tweeted his opposition to the flag being removed.

“I’m offended and disgusted that County Executive Marc Elrich has prohibited Montgomery County Police officers from displaying a 'thin blue line' American flag that was made for them by a father & his young son in honor of National First Responders Day,” Hogan wrote.

He called on Elrich to reverse his decision allow the precinct to display the flag.