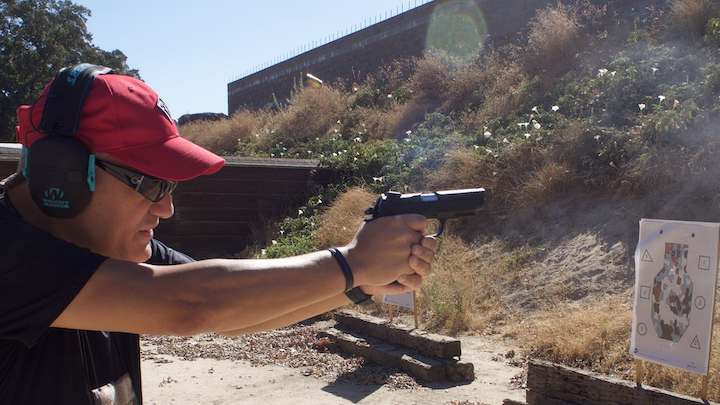 One of the more efficient ways to train for duty cartridges is to use subcaliber training devices that mimic the “real” firearm.
Lindsey Bertomen

This month we get to look at subcaliber training. There are plenty of versions of subcaliber training, from using rifled barrel inserts that fit into a 12 gauge barrel, to AR-15 conversions that allow 22LR cartridges to be used in the same upper, and replica firearms, which closely resemble their “real” counterpart.

This is mostly about replica firearms. I wasn’t such a big fan, until both SIG SAUER and Umarex really improved the game. Both companies have produced .177 caliber replica guns. Umarex offers Glock 17 and Glock 19 models, which shoot BB’s. SIG SAUER offers an M17 that shoots .177 caliber soft lead pellets, and a BB version of their P365 handgun.

How did they improve the game? These models look just like the real thing. They fit the holsters, have the same manual of arms, including slides that operate during the firing cycle. They are similar in weight, and identical in size. Even experienced users can walk right up to these models and find it hard to distinguish them from cartridge firing ones.

Side-by-side, they are hard to tell apart. That’s the whole idea.

All of these models use 12g CO2 cylinders, which fit inside of the magazine. The magazines are also similar in size and weight. I found the magazines to be slightly less durable than the real ones, so the only thing I did not do was drop them on hard ground. 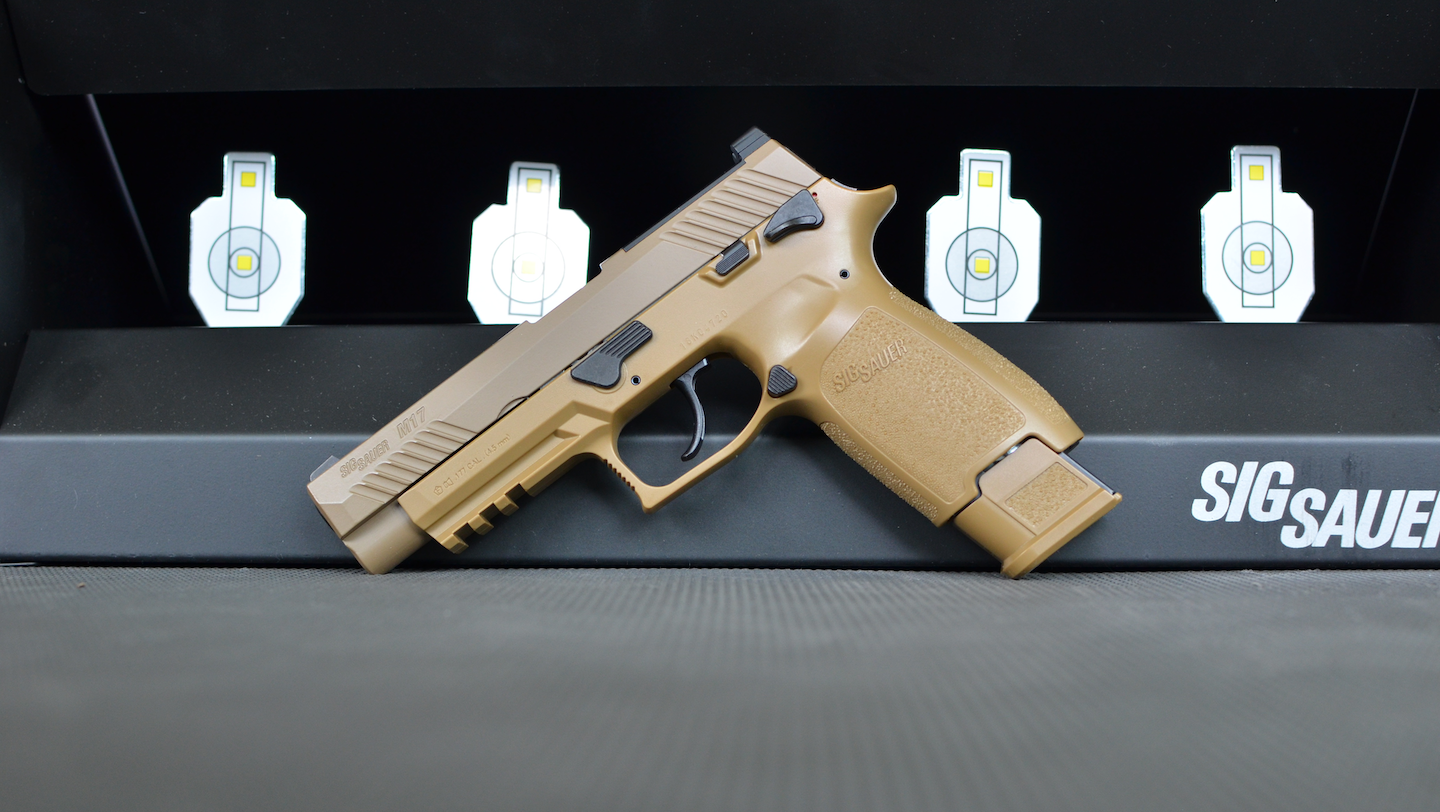 While almost identical in appearance, the subcaliber weapon models of the “real” weapons can serve as an excellent low cost resource for training.Lindsey Bertomen

The magazine design is the brilliant part. There is a valve that charges the gun when the magazine is seated, and self-seals when it is dropped. The mechanism and feel is exactly like the real thing. The magazine/valve combination can be adapted to any double stack sized magazine, so I anticipate we will see other models in the future. 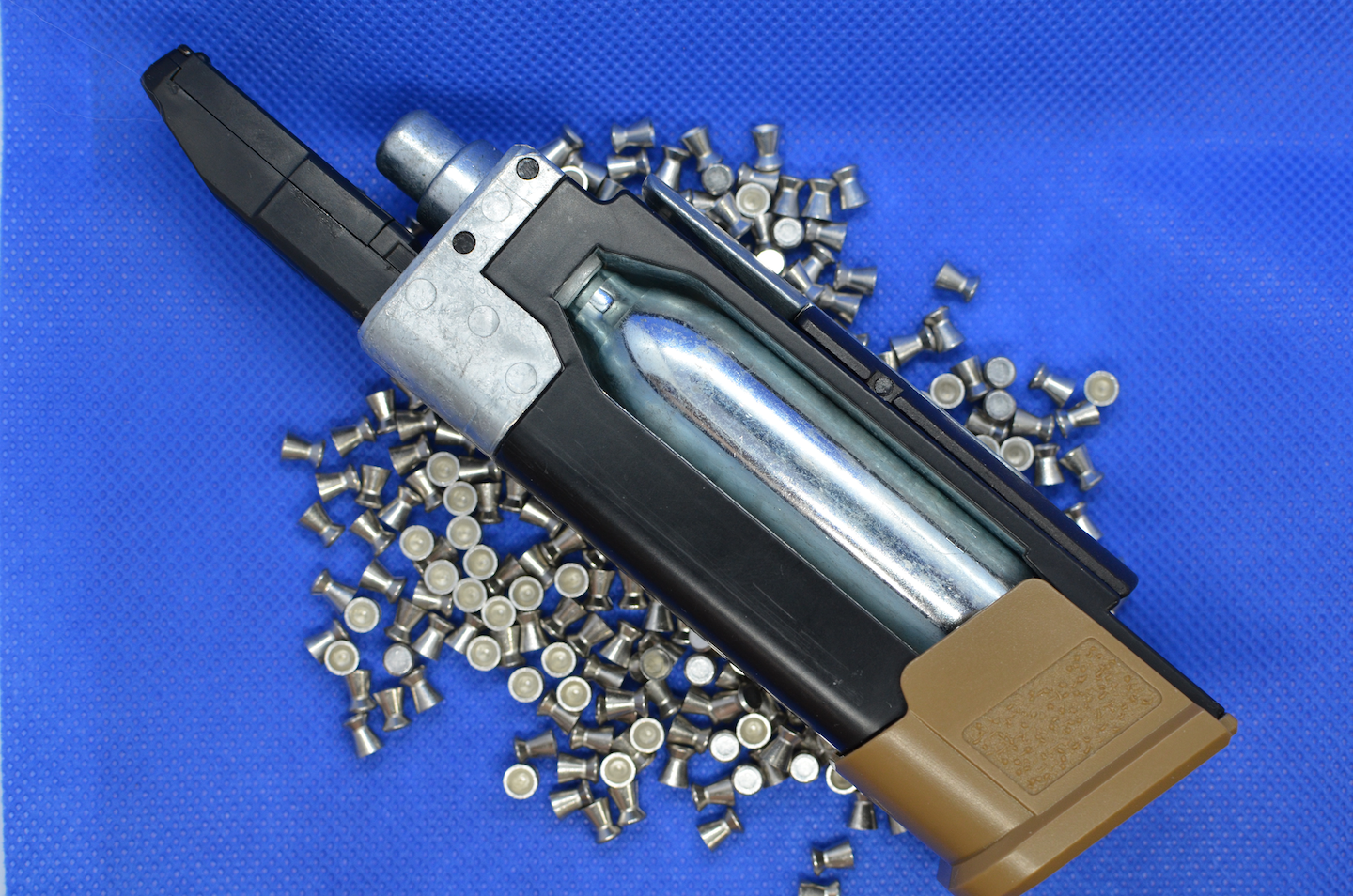 With the development of magazines that actually contain the compressed air cylinder and extra projectiles, the realism of subcaliber training reached the next and most valuable level.Lindsey BertomenWhen we are learning a skill that has a complex makeup, we break the learning of this skill down into components. Some tasks can be broken down into manageable components, then stitched together. While the person is learning these components, the learning pattern is “herky-jerky.” Completely learning the task as a collection of subsets of the task is an efficient way to train. Once the subsets are fused, the training objective becomes smoother. Repetition eventually creates habituation.

Take learning a golf swing, for example. I don’t play golf, so this is a good example for me. When learning, a person is instructed the correct stance, leg movement, hip position, club position, swing, and follow through. I’m only guessing at these components, because I will probably never learn to play golf.

When a person’s first learning to play, there is often a lack of a smooth transition from one part of the swing to the next. For example, the swing may occur, but the follow-through doesn’t follow through. The resulting placement of the ball is self-evident. An observing expert could point out all of the things that could be done to fix the swing.

The way to improve this aspect of the game is to go to the driving range, rather than try to learn it while playing a competitive game.

Using a subcaliber copy of the real thing is like going to the driving range. Applied correctly, it removes the competitive nature and focuses on the classroom training environment.

Some training environments have rules that prevent shooters from using movement while training. For example, just using a static shooting position or not allowing shooters to run up to their barricades will not teach them to dive for cover in a real firefight. Use movement in training. Having a CO2 training gun may allow a little flexibility in the movement rules.

Two drills you can do right now

There are drills you can do with a subcaliber trainer anytime. They are designed to address training scars and reinforce good training habits.

Drill #1 Shoot with both eyes open

This is a simple drill that develops a skill often overlooked in combat shooting. Although shooting with one eye is useful in static range events, learning to shoot with both eyes open will allow the Officer to use peripheral vision scanning, especially important in low light.

The training objective is to have the shooter produce accurate rapid fire from the draw, with both eyes open.

Shooting with both eyes open will allow the officer to recognize multiple targets quicker, see objects with depth of field, and reduce shooter fatigue.

First, shooters need to recognize their eye dominance. almost everyone has a dominant eye, which is the eye that the brain processes over the other, giving more visual input to that side. When it comes to shooting, the dominant eye will override the field of vision.

Test for eye dominance by making a triangle with the figures at arm’s length. Close one eye. Center an object in that triangle that is at least 5 feet away. Open both eyes. If the object remained in that triangle, the eye that was open is the dominant eye. Confirm this test by repeating it, using the other eye.

Begin at the 3-yard line with a holstered firearm. Use a torso shaped target like Action Target’s Official IDPA Cardboard Torso Target. Draw and fire 3 rounds. Re-holster. Repeat for 5 and 7 yards. Do not accept any hits that are not “A Hits”: center mass or head shots within the circle.

This is a simple drill, except the method to get to the training objective. First, shooters should focus on the target, then bring the gun up to the plane of the eyesight. This means drawing until the gun clears the holster, then immediately creating a sighting plane parallel to the ground.

The faster the sighting plane of the handgun is created, and brought to the visual plane, the faster the accurate fire. Using a subcaliber trainer like a pellet gun allows the coach to have a conversation that will accelerate improvement.

I have a training scar that came from using an open top holster that had a very generous front cutout. I used to drop the gun ever-so-slightly when I drew from the holster. It wasn’t obvious, but an experienced eye pointed this out to me while I was visiting their range. I was embarrassed. I almost dismissed it jokingly, then humbly accepted the training help. I used a pellet pistol and a lot of rounds to fix it. You should know that occasionally training scars rear their ugly heads again, and one must be diligent to extinguish them.

This is another drill where the shooter can “graduate” from using a subcaliber trainer to their duty gun seamlessly.

Begin with 3 targets set one yard apart on a “square” range, in a similar manner to the el Presidente. Use traffic cones set at 3 yards from the target line on the right limit, and 10 yards at the left limit. One the “fight” command, briskly move from left to right on the range, firing (at least) two shots per target, while following the diagonal line.

This is a good drill for steel target practice.

The training objective for this drill is to learn how to shoot while moving. Officers train with this drill to quickly establish a shooting platform on the fly. It is harder than it looks, especially when the shooter is moving further from the target line and must decide whether to continue rotating their trunk, or turn around and walk backward while engaging.

The future of training

As the War on Cops continues, some states have enacted more registration schemes that have made it harder for Law Enforcement Officers to train on their own. I live in California and am a POST (Peace Officer Standards and Training) Firearms Instructor. I am involved in academy training. Even though there is a firearms and ammunition exemption for many aspects of Academy training, all it does is make it harder for people with legitimate training needs (Academy Students) to train.

Training on a tight budget

Video: Deputies Use Lasso to Rescue Deer Stuck in Pond

A deer that got stuck in an iced-over pond in Wyoming was rescued by rope-toting sheriff's deputies on Tuesday, authorities said.
Dec 12th, 2019