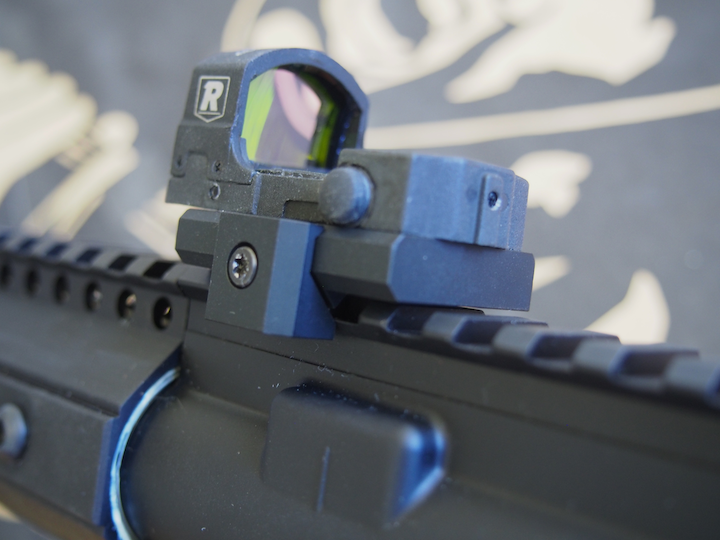 I tested an Alpha Shooting Sports 16" 7.62x39 KM13 Upper. For law enforcement agencies asking how they can employ a 30 caliber cartridge in a standard AR-15 package, this is the answer.

Amazingly, California still has some of the best AR-15 offerings in the industry with companies like Houlding Precision Firearms, and Franklin Armory. There are firearms manufacturers like Weatherby (Mark V products) and even ammunition companies like Bishop Ammunition Manufacturing and Load-X Ammunition Company here “under the wire”. If we look at all other industries in the United States, few have can stamp 100% US made, using American labor, US design and 100% American made parts. Most US gun manufacturers can. Alpha Shooting Sports can.

My Alpha Shooting Sports 16" 7.62x39 KM13 Upper has a carbine length gas tube. It is a direct impinged system. The low profile gas block is dimpled into the barrel. The advantage is a very low profile design, which allows for their free float system, using one of the most advanced hand guards in the industry.

I’m going to talk about the hand guard/free float system in a second, but I have to insert my comments here: I get to handle and shoot dozens of AR-15 systems a year. No one has a hand guard as modular, comfortable and shootable as this one. The Alpha Shooting Sports KM13 rail may be the best I’ve seen for a patrol upper.

Alpha Shooting Sports uses a 1/10 16” barrel for this upper. They use a melonite process for barrels, rather than chrome lining. Melonite has similar (usually better) wear resistance and lubricant qualities as chrome, but it affects the entire barrel, where chrome is only in the lining. I like melonite because it does not change the dimensions of the bore after treatment.

My barrel came with an AAC (Advanced Armament Corp.) Blackout 51T flash hider. This is a three prong tapered unit with a ratchet mount, which means it is suppressor ready.

Ever since the AR-15 platform was adopted by the American Military, the two schools of thought have existed. One centers around the 5.56 AR-15 cartridge, the other around the AK-47. The former is fired from the platform that is the symbol of worldwide freedom, the latter does not have the same association.

Since the first time the AR-15 was fielded, designers have attempted to stuff a 30 caliber cartridge into it. In fact, the original submission from Eugene Stoner for military testing was an AR-10 7.62x51, which preceded the AR-15.  The 7.62x51 works in a larger platform, but not an AR-15.

Predating the M-16/AR-15, Mikhail Kalashnikov developed the Soviet design AK-47. This battle rifle had different design goals. It is notoriously less accurate, but easier to mass produce. The 7.62x39 round sends a heavier bullet, but it does not approach the speed of the 5.56.  The AK-47

If you ever want to start a heated debate, ask which round is more effective in a firearm forum. You’ll hear things like,”The 7.62 round does not fragment…” and “Faster bullets are flatter shooters…” If we add the preliminary data from the 300 Blackout (7.62x35 300 BLK), the debate becomes even more lively.

Even the UK Ministry of Defense had their own contribution to the debate, finding the 5.56 cartridge lacking in their SA80A2 rifles when the range went out to +300m, against insurgents with 7.62x39. Briefly, they looked at 7.62x39. Eventually, they incorporated the 7.62x51 L129A1 in their inventory.

The elusive part is this: The 7.62x39 round has not been reliable in other platforms, leaving designers scratching their heads. There are theories about this. My theory is the steepness of the shoulder of the 7.62x39 doesn't seal the gas for very long. In an impinged system, the gas has to bleed at a specific rate. The AK-47 style cartridge lets gas bleed past it inconsistently. Obviously Alpha Shooting Sports has mastered the timing here.

What’s the bottom line on the debate between 5.56 and 7.62x39? It’s apples to oranges. However, in my own experience, 7.62x39 does a great job against solid barriers like car doors and construction materials.

The 7.62x39 proved reliable in the Alpha Shooting Sports platform. At first, however, I was a little concerned.

When we got the upper to the range, I brought two of my lowers with me. One was attached to the MMC Armory upper I recently tested. The Alpha Shooting Sports 16" 7.62x39 KM13 Upper was on the other. I fired the first two rounds, and it did not feed. It did it again. Suspecting the issue was magazine related, I switched things around a bit. As it turned out, I had just replaced the magazine catch on one of my lowers, which was not engaging correctly. I switched to my Franklin Armory receiver and proceeded to rock the range without further incident. Note to self: Replace magazine latch.

The Alpha Shooting Sports 16" 7.62x39 KM13 Upper is just plain beautiful. The inside of the receiver is smooth and the finish is well applied, even in areas that can’t be inspected without tools. After several sessions, there are no chips or wear marks.

I can’t tell much difference between the two calibers in the internal parts. The extractor is definitely better material. Alpha Shooting Sports knows that users will shoot steel cased ammunition (I tried some too) and it will handle it.

This is probably one advantage of the 7.62x39. Surplus ammunition is everywhere. I recommend that users consider cheaper ammo, just not cheap ammo.

For this test, I used the good stuff: Federal Fusion Rifle Ammunition. Federal has optimized this particular round for use in this type of rifle. This particular test would not have wrung out the capabilities of the upper without Federal.

This upper consistently shot well. First we used a set of MagPul MBUS PRO back up sights. These are low mount sights that stow away for a low profile back up. I’ve used them before. Shooters can flip them up and down hundreds of times and they always keep their zero.

Second, I mounted Redfield’s new Accelerator lightweight optic. It is a multi-coated lens mounted in a lightweight aluminum housing The optic is tiny and has a 6MOA red dot. This sight is simple and weighs almost nothing.

The 7.62x39 KM13 Upper was perfect for fast, multiple target shooting and the Redfield Accelerator is perfect for shooting with both eyes open. I would use this package for dynamic intervention where officers need to quickly sort targets from non-targets. If I had to pick a set up for an active shooter incident, this is it.

To tell you the truth, I may mount the Redfield Accelerator on my Glock.

The Alpha Shooting Sports 13" Key Mod free floating rail has a full length top rail and keyhole shaped cuts where one would expect side and bottom rails. These keyhole cuts are attachment points for short sections of rail. These sections can be placed on the free floated hand guard anywhere.

Because the hand contacts almost rounded surfaces, it is comfortable under recoil. It is also smaller in diameter and lighter than most other uppers.

How much of a difference does this make? First, it is much easier to control. It feels better in the hand and the balance point is more toward the body. It’s easier to shoot it on a barricade and it’s easier to tote it around. It may look subtly different, but its big on the range.

We put plenty of rounds through the Alpha Shooting Sports 16" 7.62x39 KM13 Upper. The recoil is a bit more noticeable than shooting a 5.56, but accurate rapid fire strings don’t really seem much different to me. It has a different feeling recoil impulse which is best described as a slight torque. Obviously, it makes much bigger holes.

The Alpha Shooting Sports 16" 7.62x39 KM13 Upper made a believer out of me and anyone who handled it. 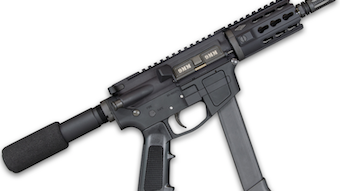 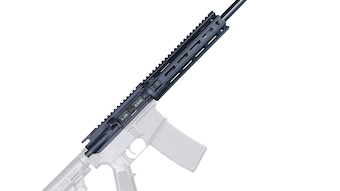 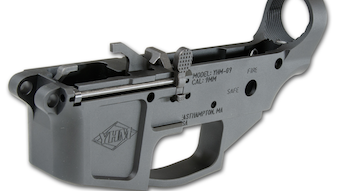 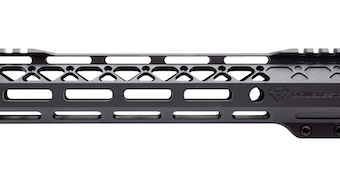 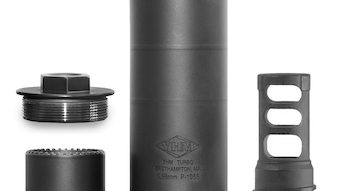 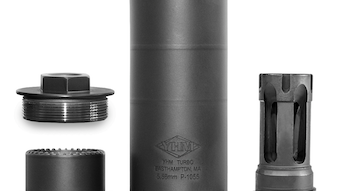 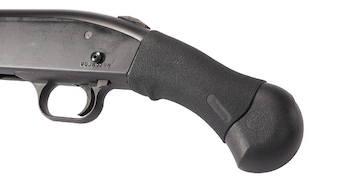 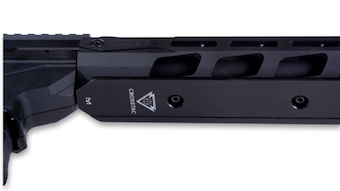