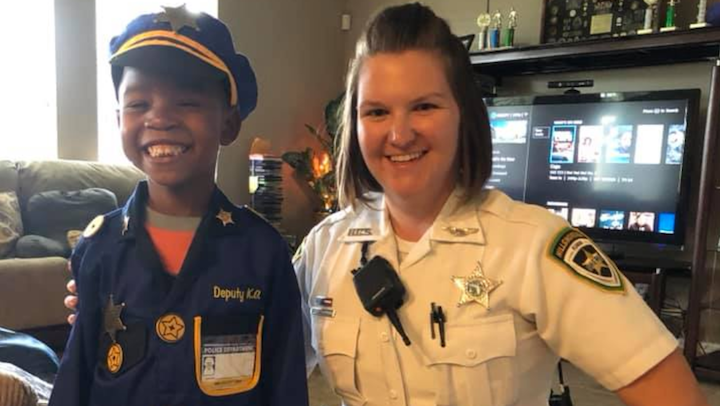 While on her way to a call in September, Deputy Sanderson saw the boy riding a toy police motorcycle and waving at her “so hard I thought his arm was going to fall off," according to a news release.

Sanderson pulled over and quickly introduced herself and told the boy she would come back to check out his motorcycle and let him look at her patrol car.

As she was on her way to keep that promise, she was dispatched to a 911 call -- this time at the boy's address. It turned out there was no emergency, and the boy just wanted to see the deputy again.

After she taught the boy the correct way to use 911, the boy told Sanderson that “he wanted to get a uniform like (hers) for when he patrols his neighborhood."

Sanderson not only made his wish come true buying him a police costume, but she also had it customized to read “Deputy KG.”

The administrative staff at the sheriff’s office District 4 office also gave Sanderson school supplies and other items to give along with the costume.

“In early September, I was on my way to a call. When I got a few blocks away from the location, I saw a little boy riding a toy police motorcycle, and once he saw my patrol car he started waving so hard I thought his arm was going to fall off!

I pulled over, and introduced myself, and asked him where he lived. He pointed to his street, and I told him I was on my way to a call, but as soon as I was done I would come back so he could show me his motorcycle, and I could show him my patrol car. While I was on my way back to find him I was dispatched as the closest unit to a 911 call. The dispatcher advised a young boy had called 911 and provided the address.

I recognized the street name as the street where my new friend lived. As I pulled up to the house, I was greeted by my new friend and his grandmother, who explained he called 911 so the deputy he met would know what house to come to...After a short lesson on the proper use of the 911 system, I learned my new friend aspires to be a law enforcement officer when he grows up. He told me he wanted to get a uniform like mine for when he patrols his neighborhood.

After our meeting we kept in touch by email. With Halloween quickly approaching I started to see police costumes all over which reminded me of my new friend. I was able to get him a police jacket and hat to match his motorcycle and had it customized to say “Deputy KG” on the name plate. The administration staff at our District 4 Office was kind enough to give me some HCSO school supplies, and goodies to give Deputy KG when I presented him with his new uniform. Needless to say he was more than happy with his gifts.

I have to say, my relationship with my new partner has been the most rewarding part of my career thus far. As deputies, we often go to some very difficult calls, which can be emotionally exhausting, but having the chance to develop a lasting relationship with a young member of the community makes everything worth it. I can’t wait to continue to see the man that my new partner Deputy KG becomes. It’s an honor to have met him, and become a part of his life.”