The 40 requests have come in the two months since ex-officer Christopher Dorner sought revenge. 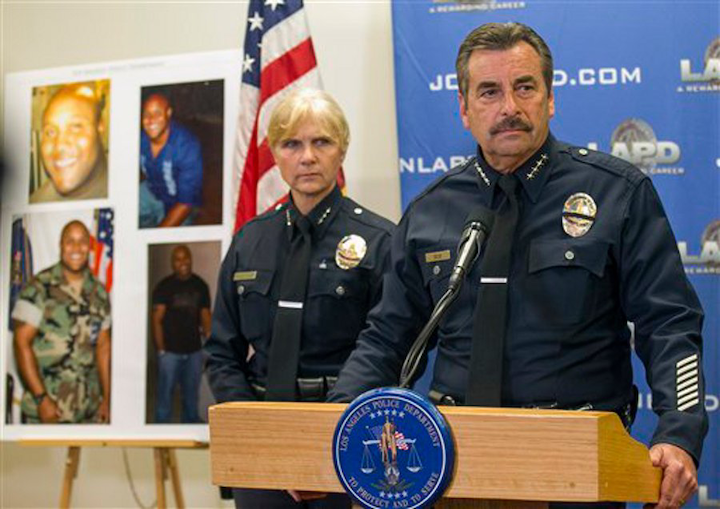 In the wake of Christopher Dorner's claim that his firing from the Los Angeles Police Department was a result of corruption and bias, more than three dozen other fired LAPD cops want department officials to review their cases.

The 40 requests, which were tallied by the union that represents rank-and-file officers, have come in the two months since Dorner sought revenge for his 2009 firing by targeting police officers and their families in a killing rampage that left four dead and others injured.

Dorner's allegations of a department plagued by racism and special interests left Chief Charlie Beck scrambling to stem a growing chorus of others who condemned Dorner's violence but said his complaints about the department were accurate. To assuage concerns, Beck vowed to re-examine the cases of other former officers who believed they had been wrongly expelled from the force.

Now, details of how the department plans to make good on Beck's offer are becoming clear. And, for at least some of the disgruntled ex-officers, they will be disappointing.

In letters to those wishing to have their case reviewed, department officials explain that the city's charter, which spells out the authority granted to various public officials, prevents the police chief from opening new disciplinary proceedings for an officer fired more than three years ago.

"Therefore the Department does not have the power to reinstate officers whose terminations occurred more than three years ago," wrote Gerald Chaleff, the LAPD's special assistant for constitutional policing. "You are being informed of this to forestall any misconceptions about the power of the department."

The reviews remain one of the unsettled postscripts to the Dorner saga. In February, three years after he was fired for allegedly fabricating a story about his partner inappropriately kicking a handcuffed suspect, Dorner resurfaced in violent fashion, bent on seeking revenge for his ouster.

After killing the daughter of the attorney who defended him at his disciplinary hearing and her fiance, Dorner killed two police officers and wounded three other people as he evaded capture during a massive manhunt. After more than a week on the run, Dorner was chased into a cabin in the mountains near Big Bear, where he died from what appeared to be a self-inflicted gunshot wound.

Dorner had posted online an angry manifesto of sorts in which he claimed that he had been a victim of a racist, corrupt police organization that protects its favored officers at the expense of those trying to report abuses. Those accusations tapped into deep wells of discontent and distrust that officers and minority communities have felt toward the department. Beck sought to reassure doubters that years of reforms had changed the department and buried the "ghosts" of the past. He then offered to review past discipline cases.

Fired officers who wish to have their terminations re-examined must first submit an affidavit or similar declaration within two months of receiving the letter from Chaleff, according to a copy obtained by The Times. The letter was sent in recent weeks to the former officers who have already come forward.

Using "clear and convincing language," the letter instructs ex-officers to explain "the new evidence or change in circumstances that would justify a re-examination of your termination."

LAPD Cmdr. Andrew Smith said Chaleff will conduct a review for anyone who follows the rules laid out in the letter. "We will do whatever it takes on the cases, including redoing interviews, if necessary," he wrote in an email.

The department and the Protective League declined to release the names of former officers who have requested reviews.

Gary Ingemunson, a longtime attorney for the League, used the case reviews as an opportunity to revive the League's perennial criticism that disciplinary hearings, called Boards of Rights, are stacked against officers.

"The Board of Rights system could be fair, but for the last few years the Department has consistently outdone itself in the attempt to completely skew the system against the officer. The Department wants to win. End of story," Ingemunson wrote in a column in the current issue of the union's monthly magazine.

One of the problems, Ingemunson and other union lawyers have said, is the makeup of the three-person panels that decide an officer's fate. Two of judges are senior-level LAPD officers, while the third is a civilian.

According to the critics, that arrangement is unfair because officers are sent to boards whenever the chief wants them fired and the officers on the panel will feel pressure to do as the chief wants.

Smith rejected that idea, saying board members are completely free to decide as they see fit. He pointed to department figures showing that over the last three years, officers sent by the chief to Boards of Rights were fired in only about 60% of the cases.

Smith defended the department's disciplinary system in general, saying it has been in place for decades and stood up under repeated scrutiny by oversight bodies.

Another allowance Beck made after Dorner's rampage, Smith noted, was to launch a broad review of disciplinary procedures to identify areas that officers believe are unfair and possibly make changes to address those concerns.

May 1st, 2013
Latest in Investigations