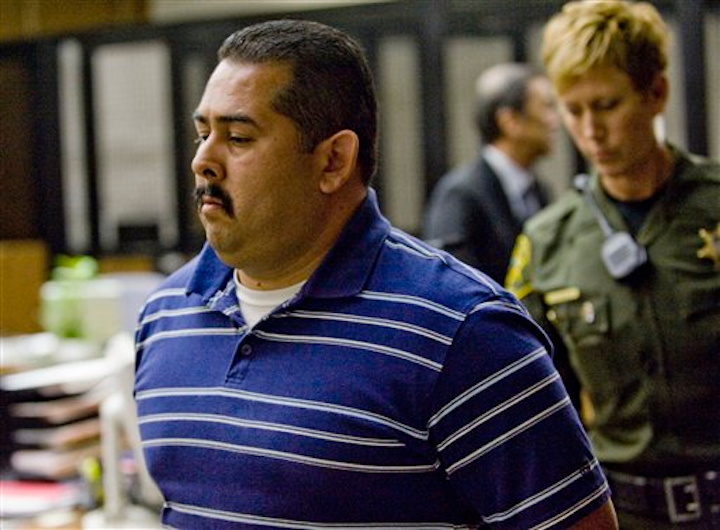 SANTA ANA, Calif. -- Two police officers were charged Wednesday in the death of a mentally ill homeless man in Southern California who was beaten and repeatedly shocked with a stun gun during his arrest, authorities said.

Officer Manuel Ramos was charged with one count each of second-degree murder and involuntary manslaughter in the death of 37-year-old Kelly Thomas after a violent confrontation on July 5 with officers, Orange County District Attorney Tony Rackauckas said at a news conference.

Police Cpl. Jay Cicinelli was charged with one count each of involuntary manslaughter and excessive force, he said.

Rackauckas said a review of the evidence showed Thomas was acting "in self-defense, in pain and in a state of panic."

"His numerous pleas of 'I'm sorry,' 'I can't breathe,' 'Help Dad' (were) all to no avail. Screams, loud screams, didn't help," the prosecutor said.

Lorie Fridell, an associate professor of criminology at the University of South Florida, said it is highly unusual for a police officer to be charged with murder.

"It is quite appropriate in such cases to hold officers to account," Fridell said. "Often, however prosecutors will give officers the benefit of the doubt."

Ron Thomas, Kelly Thomas' father, said he was pleased with the charges but still suffers every day as a result of his son's death.

"That's exactly what I hoped for," Ron Thomas said of the charges.. "It makes me feel fantastic that this is happening, it's the justice we need."

Bill Hadden, an attorney representing Cincinelli, didn't immediately return a call for comment. A call to a home number for Ramos rang unanswered.

Six officers were placed on paid administrative leave after the incident that occurred while police were investigating reported vehicle break-ins at a transit hub.

Thomas suffered from schizophrenia and lived on the streets even though he received support from family and friends.

Police said Thomas ran when officers tried to search his bag. A struggle followed when they tried to arrest him for investigation of possession of stolen goods.

Video from a bystander's cell phone taken from a distance showed parts of the bloody encounter in which Thomas can be heard screaming for his father.

Surveillance video aboard a bus showed agitated passengers telling the driver that officers beat and repeatedly used a stun gun during the arrest.

After the incident, the police chief went on medical leave and the embattled City Council hired a law enforcement expert to investigate Police Department practices.

Incensed community members held demonstrations and started an effort to recall the mayor and two councilmembers over the incident.

Ron Thomas, the father of the dead man, filed a claim seeking damages from the city.

He has previously released his son's medical records showing Thomas suffered broken bones in his face, choked on his own blood and was repeatedly shocked with two stun guns.

News reports show Cincinelli left the Los Angeles Police Department after losing an eye in 1996 while working as a probationary officer.

Cincinelli, who was 25 at the time, was shot during an on-duty gunfight during a traffic stop less than three weeks after graduating from the Police Academy, according to news accounts.

Copyright 2011 The Associated Press. All rights reserved. This material may not be published, broadcast, rewritten or redistributed.