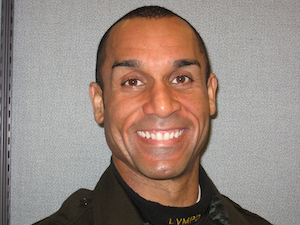 Sgt Chris Curtis has been with LVMPD for close to 20 years. He is an Officer who has never lost passion for this professio. Citizens respect and appreciate him-even the bad guys will say hi even days after he arrests them and express their appreciation for the respect he showed them. He is a rough and tough Sgt thats combined w/a witty goofy sense of humor and an energy that is -truly-not stop. Sometimes Sgt Curtis even had to stop mid-sentence due to his thoughts having passed his ability to keep up verbally! There are so many good describtions of Sgt Curtis, but nothing surpasses his commitment and love for children and the underdog. Sgt Curtis came to the Community Oriented Policing unit just a mere 7 months ago-and in that time, developed a program titled "Downtown 360". With this program he has set in motion downtown communities to come together to resist crime and bring the good out in people! ; where they live, where they work, play and go to school. He is involved 110%, and constantly thinking up how he can bring the next improvement and idea to life. The betterment Sgt Curtis brings together is in the downtown Las Vegas neighborhoods, schools, businesses, streets, and most importantly, in peoples individual lives. He brings honor, respect, fun and sincere care to the image we all uphold as Police Officers. Our squad, therefore, proudly submits Sgt. Chris Curtis for Officer.com Officer of the year!