A Huntsville police officer who was shot and killed in the line of duty Friday night has been identified as Billy Fred Clardy III. He was a 48-year-old husband and father of five children. 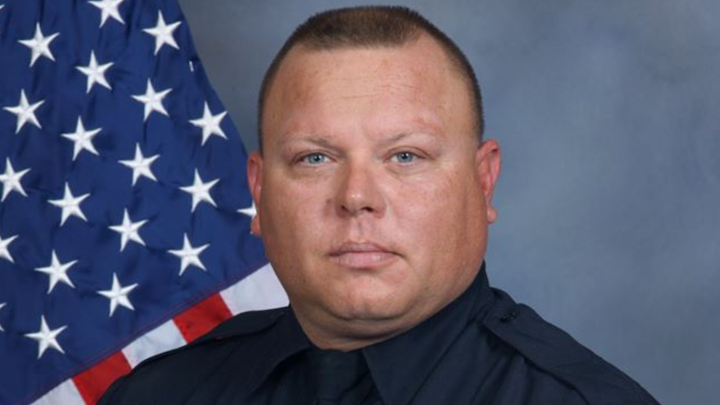 HUNTSVILLE, Alabama -- A Huntsville police officer who was shot and killed in the line of duty Friday night has been identified as Billy Fred Clardy III. He was a 48-year-old husband and father of five children.

Huntsville police Chief Mark McMurray was surrounded by dozens of law enforcement officers, local leaders and Clardy’s family as he publicly announced the officer’s name at the Fallen Officer Memorial outside the police department’s headquarters on Saturday afternoon.

Clardy had been a Huntsville police officer since 2005. He joined the Madison-Morgan County HIDTA Drug Task Force, known as the STAC team, in 2018. Before joining Huntsville police, he worked for the Limestone County Sheriff’s Office and the Fayetteville Police Department in Tennessee. He also was a decorated veteran of the U.S. Army.

“Billy Clardy was more than a Hunsville hero,” McMurray said. “He was an American hero.”

McMurray said Clardy had received dozens of awards during his time at HPD, including 19 certificates of commendation, two outstanding unit citations and eight letters of appreciation. He had been a patrolman, community resource officer and training officer, among other assignments during his 14 years at HPD.

Huntsville Mayor Tommy Battle said Clardy was a dedicated community advocate who cared deeply for the local homeless population. He called Clardy a “good friend” and “special gift” to the city.

“Our whole community is feeling the hurt of losing one of our own,” Battle said. “Billy Clardy is someone who will be missed ... someone who set a standard for us as a community.”

Clardy’s funeral services will be Tuesday at Whitesburg Baptist Church, 6806 Whitesburg Drive in Huntsville. A public viewing will be held from noon-2 p.m.

Clardy became the sixth Alabama law enforcement officer to be shot and killed in the line of duty this year.

The last time a Huntsville police officer was shot and killed in the line of duty was Dec. 14, 2007 when officer Eric Freeman died. Kenneth Shipp is serving life in prison for that deadly shooting.

Clardy was the son of Billy Clardy Jr., a Huntsville police officer who was killed in an on-duty crash 41 years ago. The crash happened May 3, 1978 on U.S. 72 at the intersection of Old Gurley Road when his patrol vehicle left the road and hit a rock wall.

The shooting happened after 4 p.m. near the corner of Oakwood Avenue and Levert Street Northeast during a drug task force operation. When the suspect arrived at the location, he drew a gun and shot Clardy. Officers returned fire at the suspect, who was uninjured, police said.

Clardy was wearing a bullet proof vest, the chief said, but the bullet went through the top of the vest and into the officer’s heart. After more than an hour of medical treatment at Huntsville Hospital, Clardy died. The chief praised the medical staff who tried to save the officer’s life.

“Billy Clardy woke up (Friday) morning and he put his gun and badge on to go do something he loved to do,” said Madison County Sheriff Kevin Turner. “He loved his job. Billy Clardy would do it all over right now. I know he would.”

Jay Town, the U.S. Attorney for the Northern District of Alabama, praised the work of law enforcement and called on the public to support them.

“To Billy’s family, this community’s prayers, thoughts (and) hearts are with you,” Battle said. “We’re with you forever. As long as you need us, we will be there.”