Lowndes County Sheriff John Williams was shot and killed Saturday night in the line of duty. 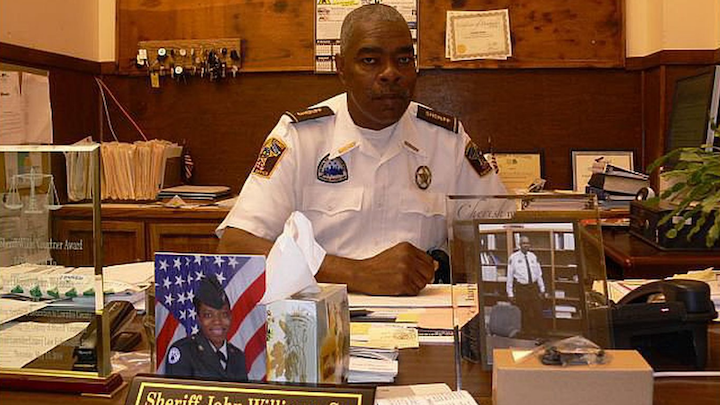 The shooting happened shortly after 8 p.m. at a QV convenience store in Lowndes County. The sheriffs’ vehicle was reportedly stolen by the suspect – a white male - and a manhunt is now underway, according to law enforcement sources. The stolen vehicle is believed to have been abandoned and recovered.

The State Bureau of Investigation agents are on the scene, said ALEA Cpl. Jess Thornton.

Gov. Kay Ivey expressed her condolences via Twitter. “I’m saddened to hear about Sheriff Big John Williams, who was tragically killed this evening in the line of duty. Through his service to our country in the USMC and his many years working in law enforcement, he dedicated his life to keeping other people safe,’’ she wrote. “He will be remembered as a consummate profession and pillar of his community. I offer my prayers and deepest sympathies to his family and ot he men and women of the Lowndes County Sheriff’s Department.”

Williams was born and raised in Lowndes County and graduated from Calhoun High School in 1976, according to the sheriff’s office website. “Sheriff Wiliams always wanted to make a difference in his community and felt there was no better way to help his community than to protect and serve them in law enforcement,’’ reads the bio on the website.

Williams in 1978 started volunteering as a reserve deputy under then Sheriff John Hulett. From 1984 through 1987 Williams worked for the Hayneville Police Department until he began working full time with the Lowndes County Sheriff’s Office. He not only worked full time with the Sheriff’s Office but continued his employment with Hayneville Police Department.

From 1987 to 1990 Williams served his community as a deputy. In 1990, he was appointed by Sheriff John Hulett to chief deputy and served in this capacity until leaving the department in 2009.

In 2010 he ran for Sheriff of Lowndes County and was elected by a majority of votes by the people he had been serving his entire life. In 2014 Williams was once again elected.