A day after a shootout that left Detroit Police Officer Rasheen McClain dead and another officer in the hospital, Chief James E. Craig said it was a dark and painful time for the department. 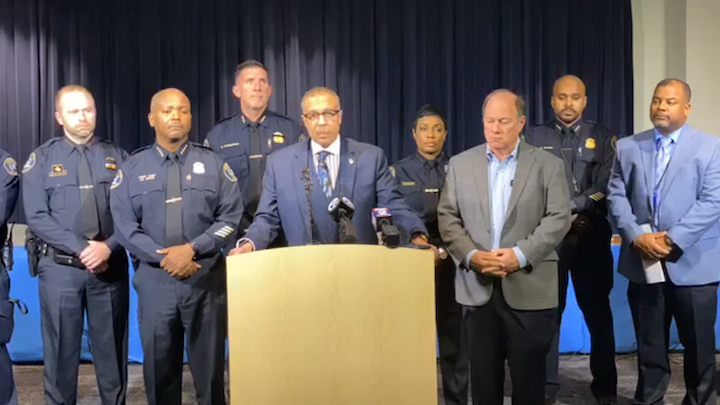 A day after a bloody gunfight on the city's west side that left Detroit Police Officer Rasheen McClain dead and another officer in the hospital, Chief James E. Craig said it was a dark and painful time for the department.
Detroit Police Department

DETROIT -- A day after a bloody gunfight on the city's west side that left one Detroit police officer dead and another in the hospital, Chief James E. Craig said it was a dark and painful time for the department.

"This is certainly a heartbreaking day for the brave men and women of the Detroit Police Department," Craig said. "Our prayers and thoughts go out to them."

Craig said the slain officer, Rasheen McClain, was a 16-year veteran of the force and a gifted, professional leader. Detroit Mayor Mike Duggan praised McClain's courage and said he was someone to whom everyone looked up.

The city, the mayor said, is mourning a hero.

"We've had far too many of these and each one gets even more painful," Duggan said. "I'm always struck by the fact that we seem to lose the best of our officers in these tragedies."

Police did not name the 28-year-old suspect because he has not yet been arraigned. The suspect, police said, was armed with an assault weapon with an extended magazine.

The suspect, police said, was on parole and had an extensive criminal record.

The suspect was not in the military, Craig said, but appeared to have training paramilitary training. He did not speak during the incident, police said, but was warned several times.

Craig said it appeared that the suspect was targeting police and sought to bait the officers and was seeking to die by provoking a lethal response in what is commonly known as "suicide by cop."

The violent gunfight broke out between the officers and the suspect in brick, two-story house on the 20000-block of Wyoming. Police said the suspect was angry and "looking for his girlfriend."

He had gone to the house about two weeks earlier and shot at it.

Wednesday night, he returned and, police and a witness said, was full of tension, violence and tragedy.

At about 7:20 p.m., two officers — McClain and his partner, Phillippe Batoum-Bisse,  both from the 12th Precinct — responded to a report of a home break-in at Wyoming and Pembroke avenues.

Eight minutes later, the officers arrived at the home.

The occupants of the house were frantic and told them the suspect was inside and armed. McClain called for backup, and two more officers arrived all four entered the home.

They cleared the upstairs of the house and were coming back downstairs when, police said, the suspect shot them. He fired two shots, one hit McClain in the neck, the other hit Batoum-Bisse in his left ankle.

Those two officers did not return fire, the chief said.

However, the two other officers and the suspect later engaged in a gunfight. The officers had a shotgun and a police-issued 40-caliber handgun. The suspect was apparently hit by gunfire and ran.

Police caught him about a block away and took him to a hospital for treatment.

The suspect has a violent criminal history with a string of convictions including assault and weapons-related crimes. Two women also appear to have sought restraining orders against him.

He was paroled in March after serving time in prison, records show.

In 2011, a Wayne County jury convicted the suspect of assault with intent to do great bodily harm less than murder and weapons possession, court records show. A year before that, two women sought protection orders.

Phillip Wright, 71, who lives three houses away from the one where the officers were shot, described a scene in which police — in the confusion and frenzy to catch the injured shooter — ran through his home.

They tackled his 69-year-old wife and teenage grandson, Wright said.

Dried blood was visible Thursday on a tarp and the fence in Wright's back yard. The suspect, who was shot, appeared to have tried to climb Wright's fence to get away from the police.

Officer Down Memorial Page, a nonprofit organization that track's fallen law enforcement officers, listed on Thursday 238 line-of-duty deaths in the Detroit Police Department dating to 1878, not including the latest death.

It now needs to include one more.

The officer's death also adds to the fatal tragedies nationwide of police officers. According to FBI statistics, 106 law enforcement officers were killed in line-of-duty in 2018. Of those, 23 were in the Midwest.

Craig and other officials had much to say Thursday about the heroism of the officers and the tragedy that the department now faces.

"One thing that stood out to me, relative to officer McClain, was he was a leader," Craig said, mentioning that he had a chance to review the officer's body camera. "Very tactical. Very much about doing a great job."

Craig said when McClain arrived at the scene he was in charge and understood he was facing a "very dangerous situation" and did not hesitate to ask for help from other officers.

“There are no words that are adequate to convey our heartfelt condolences to officer Rasheen Phillipe McClain’s family,” said Craig Miller, president of the Detroit Police Officers Association. “Officer McClain loved this city and was proud to serve and protect its citizens.”

Wayne County Prosecutor Kym Worthy added that Wednesday's shooting is what police sign up to do — and potentially must face every day.

"They run into danger to protect us," she said. "We must never forget this and should not need a horrible tragedy to remind us.”