The New Jersey State Policeman’s Benevolent Association shared a video that shows Jersey City Police Sgt. Majorie Jordan leaving cover and racing onto a sidewalk amid a hail of gunfire to assist a police officer who had been shot in the shoulder. 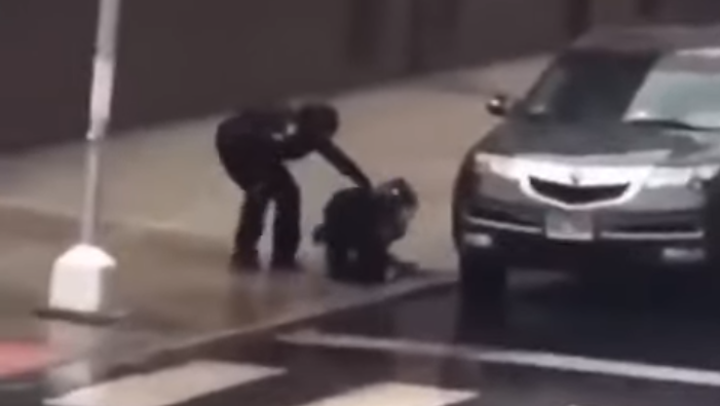 JERSEY CITY, New Jersey -- Jersey City police director James Shea on Wednesday praised the heroism of his officers in responding to a shooting rampage Tuesday that left a detective and three civilians dead. On Thursday, yet another example of a cop’s selflessness coming to light.

The New Jersey State Policeman’s Benevolent Association shared a video that shows Sgt. Majorie Jordan leaving cover and racing onto a sidewalk amid a hail of gunfire to assist a police officer who had been shot in the shoulder.

“There were so many heroes on Tuesday. Brave officers who confronted hundreds of rounds being fired at them. This video and picture captures one of those heroic moments,” the state PBA said in the Facebook post. "One Jersey City police officer responds and confronts the killers by pinning them down in the kosher grocery store. He is almost immediately shot and stumbles behind a parked car.

“Jersey City Sergeant Majorie Jordan instinctively reacts, abandons her cover and runs into the hail of gunfire to aid the other officer who is shot in the shoulder. She gets him to his feet and to safety, all the while taking heavy gunfire. The heroics of Sergeant Jordan and this officer were played out throughout the ordeal by dozens of officers.”

Jersey City Mayor Steve Fulop on Thursday morning said many more people could have died if not for the quick actions of the city’s police officers to keep the shooters from leaving the market.

As the 17-second video begins, the wounded officer is sitting on the sidewalk near the corner as he took cover behind a vehicle. Jordan runs over to her colleague and guides him around the corner to safety. A barrage of gunfire and wailing sirens can be heard during the frantic scene.

The officer’s hat was left behind.

The shooting rampage began when the two suspects shot Jersey City Det. Joseph Seals, 49, in the head at Bayview Cemetery as was investigating last weekend’s murder of a car service driver in Bayonne.

Three more people were killed inside a kosher grocery store on Martin Luther King Drive after two gunmen went into the store with high-powered rifles.

The others killed were identified as Moshe Deutsch, 24, a Hasidic man who was visiting from Brooklyn; Leah Minda Ferencz, 33, a co-owner the Kosher grocery with her husband, who was not present at the time; and Miguel Douglas Rodriguez, 49, of Jersey City, who worked in the store.

The shooters – identified as 47-year-old David Anderson and 50-year-old Francine Graham – were killed following a standoff with police that lasted more than four hours.

Have a tip? Tell us. nj.com/tips. Get the latest updates right in your inbox. Subscribe to NJ.com’s newsletters.