A Tuesday evening shooting on the city’s Northwest Side sent a Chicago police officer to the intensive care unit, left a man dead and injured a boy who was in the middle of a piano lesson. 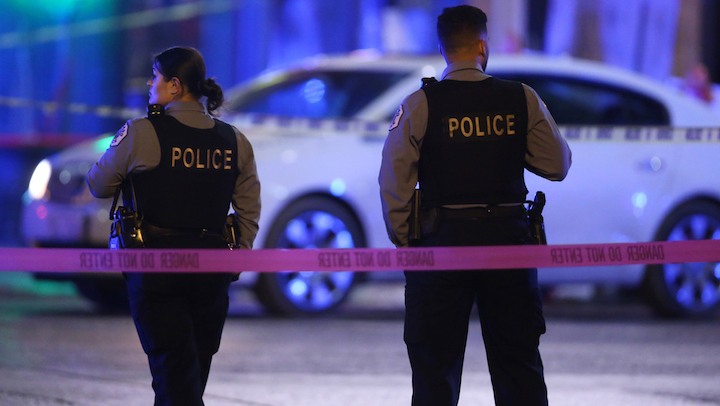 Police work the scene at North Lowell Ave and West Irving Park Road, where a Chicago police officer was shot and wounded in a gun battle near the Kennedy Expressway on Nov. 19, 2019.
Chris Sweda/Chicago Tribune/TNS

CHICAGO — A Tuesday evening shooting on the city’s Northwest Side sent a Chicago police officer to the intensive care unit, left a man dead and injured a teenage boy who was in the middle of a piano lesson, authorities said.

The shooting occurred in the 4300 block of West Irving Park Road around 7 p.m., police said, the conclusion of a frenzied chain of events that began as a bank robbery in suburban Des Plaines and launched responding officers from four different law enforcement agencies, officials said in a Tuesday evening news conference.

The bank robbery occurred at 4:30 p.m., and one of the tellers was “adroit enough” to place a tracker in a bag with money, Kushner said.

One of the suspects was taken into custody immediately following a foot chase, and their car was found, but the second suspect got away, Kushner said.

That suspect confronted a couple coming home from work and carjacked their vehicle at gunpoint, Kushner said. The couple called 911, and a chase ensued.

FBI agents, along with Chicago police, Illinois State Police and Des Plaines police, tracked the man and waited for him when he exited the expressway at Irving Park Road just before 7 p.m. The suspect fired at Chicago police vehicles, striking a Chicago police officer in the head, Johnson said.

Des Plaines police continued the pursuit, ending in a music store in the 4200 block of Irving Park Road. The suspect and Des Plaines police officer exchanged gunfire, Johnson said, and the man was fatally shot.

A spokeswoman from the Cook County medical examiner’s office confirmed that one person related to the confrontation had died, but provided no additional information.

A 15-year-old boy, who was in the music store for a piano lesson, was also shot in the arm and abdomen, Johnson said. He said the teenager was taken to Comer Children’s Hospital, where his condition was stabilized, but Chicago Fire Department officials previously said he was taken to Lurie Children’s Hospital in serious condition. At least one Albany Park District squad car was parked Tuesday night outside Lurie.

Johnson said there were no shots fired by Chicago police in the incident.

“Again, this was a very tumultuous scene,” Johnson said. “I want to offer my heartfelt concern for all those involved, and I pray for a speedy recovery for our officer and the 15-year-old.”

Fellow police transported the injured officer, who remained conscious, to Illinois Masonic, according to a source. Police said he is a 17-year veteran who works with the Albany Park District tactical team.

Chicago police spokesman Anthony Guglielmi initially said the officer suffered a graze wound to the head and was responsive but later tweeted the bullet did penetrate the officer’s skull and his injuries appeared more serious than first reported.

The 46-year-old officer was in “serious but stable” condition, Dr. Marius Katilius said Tuesday night. He suffered a skull fracture and had blood on his brain, Katilius said, though the officer was alert and talking.

“The next 24 hours will be pivotal in the care,” Katilius said.

In an email, Guglielmi said the officer’s condition remained the same. Doctors said he would be in the intensive care unit for 24 to 48 hours “to monitor his status,” Guglielmi said.

Hours after the shooting, a white car with its headlights on stood in the middle of Irving Park Road facing east, surrounded by red crime scene tape and several police cars with lights flashing. A helicopter could be seen hovering nearby.

Tuesday’s shooting occurred on the one-year anniversary of a gunman opening fire at a South Side hospital and killing four people, including a veteran Chicago police officer. Police officials commemorated the fallen officer hours before the shooting.

Mayor Lori Lightfoot noted the “strange twist of fate” that the Mercy Hospital shooting happened one year ago Tuesday.

“We are once again reminded of the service and sacrifice our officers make every single day to protect this city and to keep us safe,” Lightfoot said. “My wife and I are asking all Chicagoans to come together and pray for the officer shot this evening as well as the young individual who was also shot in the crossfire.”

The cop shot Tuesday night is the first Chicago police officer shot since September, when Adam Wazny, of the department’s fugitive apprehension unit, was wounded by gunfire while trying to arrest Michael Blackman, a suspect wanted for another shooting earlier that week.