Newly released body camera video shows Brookside police arrest a 51-year-old California man who has been charged in the abduction and assault of a woman over the weekend. 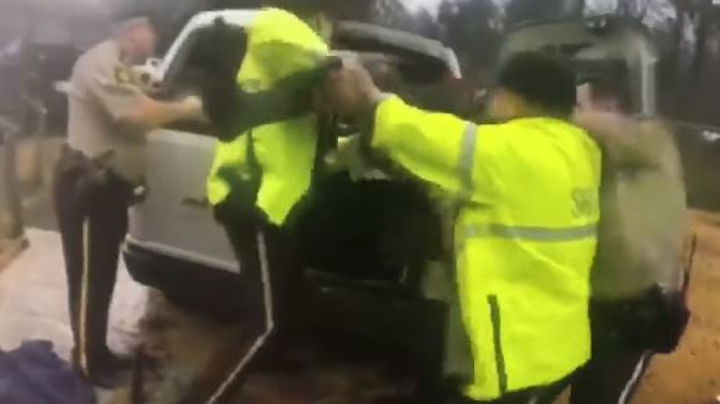 Newly released body camera video shows Brookside police arrest a 51-year-old California man who has been charged in the abduction and assault of a woman over the weekend.
Brookside Police Department

BROOKSIDE, Alabama -- A 51-year-old California man has been formally charged in the weekend abduction and assault of a woman in Brookside.

Sean E. Sanders was arrested Sunday in a 1997 Ford Aerostar Cargo van equipped with a cage in the back, wire cages over the windows and blankets covering the walls to prevent anyone from seeing inside. The doors were also chained shut from the inside.

Initially, it looked like Sanders was prepped for the worst-case scenario – a planned abduction with the intent to possibly hold the woman hostage or even trade her in some kind of human trafficking operation. It had all the makings of the stuff of the public’s nightmares of late.

As terrible as the crime itself is, investigators say it doesn’t appear to be part of a larger scheme. Sanders actually had been living in that van up until a few weeks ago and very likely knew the woman he is accused of accosting. He has not yet released additional details or a possible motive.

“We don’t believe at this point he is a serial kidnapper or anything and I believe this is an isolated incident,’’ said Brookside Police Chief Mike Jones. “We believe they may know each other through a street relationship.”

The ordeal began at 2:45 p.m. when a citizen notified Brookside police of a kidnapping in progress of a white female on Brookside Coalburg Road. The witness said a black male was trying to drag a white female into a wooded area until he spotted the witness and then forced the victim into a white van.

“I believe God placed him there for a reason,’’ Jones said of the witness.

Two Brookside patrol units spotted the suspect van passing Sharon Heights Baptist Church at which point the suspect rammed a witness’s vehicle. Officers attempted to stop the suspect vehicle, but he fled on Bivins Brookside Road and the chase was on.

Additional officers responded to assist and were able to block the suspect vehicle on Mt. Olive Rd where they could see an injured woman bleeding from her head being held against her will and forced to the floorboard by the suspect.

Officers tried to make entry into the van, but the suspect fought officers and rammed a police unit as he fled that scene. Police again pursued the van and requested tactical response units to assist.

As the vehicle approached the area of Joe Nail Road, officers were able to barricade the suspect’s vehicle. The suspect attempted to run over a Brookside officer at which time the officer shot into the van as it drove into the front yard of a nearby residence.

Jones said officers surrounded the suspect vehicle and established a tactical perimeter surrounding the van. The suspect held the victim at knife point barricaded in the rear of the van.

Tactical response units and Jefferson County sheriff’s deputies arrived on the scene. Officers tried to negotiate with the assailant as he continued to hold the victim hostage. “The suspect was demanding the officers kill him,’’ Jones said.

The tactical officers breached the rear of the van, made entry, rescued the victim and took the suspect into custody. Sanders was tazed during the incident.

His three dogs were with him when he was arrested. They were taken in by animal control officers and are doing fine.

Initially police said Sanders told them he had an extensive criminal history involving assault, kidnapping and narcotics arrests. Jones said further investigation showed Sanders had served time in prison for robbery many years ago but said they had not found any prior kidnapping arrests.

Investigators have interviewed Sanders and he’s been cooperative. “He’s admitted to the kidnapping and assault here,’’ Jones said. “He also said he drove toward our officer and that he wanted the officers to kill him.”

Sanders has no previous criminal history in Alabama, except for two traffic violations he received in for driving with an expired tag and without insurance in mid-November. It isn’t immediately clear when he moved to Alabama, but until recently he and his three dogs had been living in vehicles in the parking lot of Starbucks on Lakeshore Parkway. At first, he was in an SUV that was later totaled, and only recently had he acquired the white van.

Homewood police said they had no known dealings with Sanders.

A group of people had rallied around Sanders in recent months, at first bringing his dogs food and heartworm preventative. One of the women who had helped him for months asked to remain anonymous but said she was shocked when news surfaced of Sunday’s incident.

She got involved with him because she frequents that Starbucks and noticed he may need help. She learned others were already involved with him and they joined forces. “He was a very, very smart nice guy,’’ she said. “I’m always on the paranoid side and I never felt uncomfortable around him,’’ she said. “He was very lonely. It was hard to leave him because he kept wanting to talk.”

Sanders told those who helped him that he moved to Alabama from California to get away from gangs there. He came to Alabama because he had a brother here, but that brother moved away about the same time Sanders arrived. Sanders may have lived briefly in Dothan before coming to the Birmingham area.

Sanders, she said, attended a Fultondale church and also was part of a Bible study in Homewood. She and others attended his baptism in Fultondale, and a dinner that followed at the home of a couple in Pelham who also had befriended him. The group had paid for a hotel room for him the night before his baptism so he could shower. Occasionally they would also put him up in a hotel if the temperatures were extremely cold or hot.

In early December, another woman helped him secure an apartment in Ensley that would also accept his three dogs. The apartment is federally subsidized with the eventual plan of him becoming self-sufficient.

She said she last saw him on Christmas Eve, where she met him to deliver some items from his apartment. Though he had told those helping him he had been convicted in a robbery 20 years ago, she said those helping him would have never expected him to be involved in the crime for which he is accused.

“We never got any weird vibes from him,’’ she said.

The Brookside chief said their investigation confirmed he had been living in his vehicle and was helped by multiple people from various organizations and churches, which is not uncommon. Jones said many homeless people are helped in a similar manner.

“That’s the scary part,’’ he said. “People are trying to be kind-hearted and then someone they’re helping does this. But you don’t want to tell people to stop being kind-hearted.”

To be clear, Sanders has been accused of no wrongdoing involving any of the people who had befriended him.

Police on Tuesday charged Sanders with first-degree kidnapping and two counts of attempted murder. They are also filing to seize his van. He is expected to be transported to the Jefferson County Jail later Tuesday and Jones said he may release additional information on more charges at that time.

The victim, who lives in Jefferson County, is secluded and recovering. Jones said she refuses to talk right now. She was not one of the people who was helping Sanders, though they are believed to be acquainted.

The witness, he said, wishes to remain anonymous except for with police.

The chief said he is proud of the way his officers handled the entire situation. “These law enforcement officers are true heroes. They risked their own safety to save a life with outstanding restraint, bravery and professionalism,’’ Jones said. “I pray for these officers every day and for their safety.”

“I also commend the initial witness who reported the kidnapping,’’ he said. “Without his vigilance and proactive response, we could be investigating a homicide.”

Two Federal Way police officers were injured and a 23-year-old man died early Tuesday in a gunfight between the man and officers, who were responding to a disturbance call.
Jan 2nd, 2020
Conferences & Seminars