5 Stabbed in 'Act of Domestic Terrorism' at Hanukkah Party

Defiance mingled with fear pervaded a suburban New York synagogue Sunday, the morning after a man with a machete wounded five victims during a Hanukkah celebration next door — an attack deemed an “act of terrorism” by Gov. Andrew Cuomo. 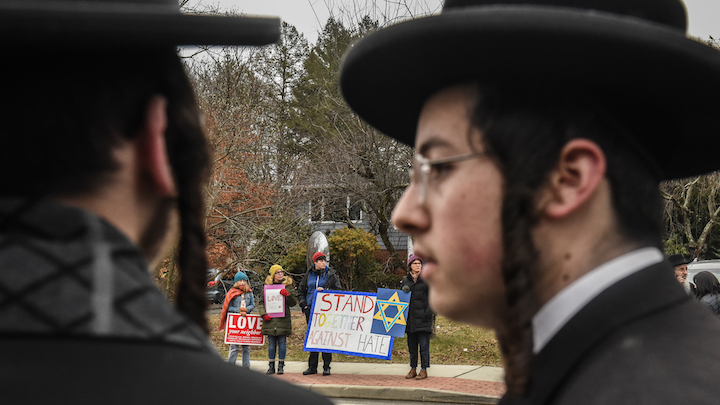 People hold signs of support near the house of Rabbi Chaim Rottenberg on December 29, 2019 in Monsey, New York. Five people were injured in a knife attack during a Hanukkah party and a suspect, identified as Grafton E. Thomas, was later arrested in Harlem.
Stephanie Keith/Getty Images/TNS

NEW YORK — Defiance mingled with fear pervaded a suburban New York synagogue Sunday, the morning after a man with a machete wounded five victims during a Hanukkah celebration next door — an attack deemed an “act of terrorism” by Gov. Andrew Cuomo.

Members of Congregation Netzach Yisroel in Monsey, N.Y., prayed and danced outside the scene of the grisly attack hours after a judge ordered the suspect held on $5 million bail.

“We will not cave in to fear,” Baruch Sandhaus captioned a Twitter video of dozens of men worshiping. “Through the darkness of Nazi Germany.. to the #MonseyStabbing … Singing & Dancing with the Torah.”

Still the 75 or so shaken congregants who attended Sunday services were on edge, according to a worshiper.

Even with police on hand during the services, the sound of someone moving a garbage can outside the entrance startled congregants, he said.

Grafton Thomas, who lives in Greenwood Lake about 20 miles from Monsey, was charged with five counts of attempted murder and one count of burglary. He pleaded not guilty during his arraignment just before noon Sunday in Ramapo town court.

Thomas, 37, was covered with blood he had tried to remove with bleach when cops nabbed him in Harlem hours after the attack — and a bloody machete was recovered from his getaway car, according to prosecutors and police sources.

He was ordered held on $5 million bail by Judge Rhoda Schoenberger and is due back in court Friday.

Thomas, sporting a shaggy beard, said nothing during his court appearance. He lives with his father, who has an auto body shop, sources said.

His lawyer, Christine Ciganik, said in court he has no criminal record. Lohud.com reported he was hit with menacing and reckless endangerment charges last summer in Greenwood Lake, but those charges were to be dismissed if he stayed out of further legal trouble.

Prosecutor Michael Dugandzic urged the judge to hold Thomas without bail, but the judge said the state’s new prison reform laws prevent that, according to lohud.com.

Thomas, armed with the machete, allegedly entered Rabbi Chaim Rottenburg’s home in Monsey’s Forshay neighborhood around 9:50 p.m. Saturday and wordlessly stabbed five people, including a son of the rabbi.

Congregants, who had just lighted a menorah, threw chairs and desks at the assailant to try and stop him.

Three victims were treated and released while two remain hospitalized, one in serious condition with a skull fracture, authorities said Sunday.

The stabber tried to make a run from the rabbi’s home to the rabbi’s synagogue next door — but someone locked the door to keep him from going inside. He sped off in his car instead.

A witness who recorded the suspect’s license plate and alerted authorities is credited with helping make the quick arrest possible.

Cuomo denounced the attack as “a blatant act of domestic terrorism that sought to inflict violence, incite hate and generate fear.”

After visiting Rabbi Rottenburg in the morning, Cuomo directed the state police to increase patrols and security in Orthodox Jewish neighborhoods throughout the state. A Cuomo official said the move involved a “significant deployment” of state police forces but declined to provide a number, citing security concerns.

“It’s a very sad situation,” the governor told reporters after meeting with Rabbi Rottenburg. “Hate and violence, that’s all it was.”

He vowed to push for a first-in-the-nation state law that would allow suspects in similar cases to be charged as domestic terrorists.

“Just because they don’t come from another country doesn’t mean they’re not terrorists,” Cuomo said. “They should be prosecuted as domestic terrorists because that’s what they are.”

Elected officials around the country denounced the violence — the latest in a horrifying streak of anti-Semitic attacks from Newark to Pittsburgh to Poway, Calif., where 16 people were killed in separate attacks over the last year and a half.

“We will NOT allow this to become the new normal. We’ll use every tool we have to stop these attacks once and for all,” Mayor de Blasio tweeted, adding that the NYPD had deployed a “visible and growing presence” to synagogues in heavily Jewish Brooklyn neighborhoods including Borough Park, Crown Heights and Williamsburg.

“We must all come together to fight, confront, and eradicate the evil scourge of anti-Semitism,” President Trump tweeted Sunday. “Melania and I wish the victims a quick and full recovery.”

Saturday’s attack in Monsey, located about 30 miles outside the city, came after the Big Apple saw a streak of anti-Semitic attacks last week.

On Friday, an unhinged woman punched three Jewish women outside the Chabad Lubavitch headquarters in Crown Heights. It was the second hate attack in less than 12 hours, and the eighth alleged anti-Semitic incident in the city since Dec. 13, according to police.

Cops counted 214 anti-Semitic hate crimes this year as of Friday, up 14% from the same period last year. That accounts for more than half of all 406 hate crimes police have investigated this year.

“Everybody is wondering what was the motive, why did he do it? Was it targeted, not targeted?” Guttman said of the Saturday night attack.

“We hope everybody … will be okay,” he added. “We hope this is the last one, the last attack on us.”