Manhunt on for Suspect in Death of Texas Police Sergeant

Tavores Henderson, who is wanted in the death of Nassau Bay Police Sgt. Kaila Sullivan may be headed for Louisiana, according to an alert issued Wednesday night from the Texas Department of Public Safety. 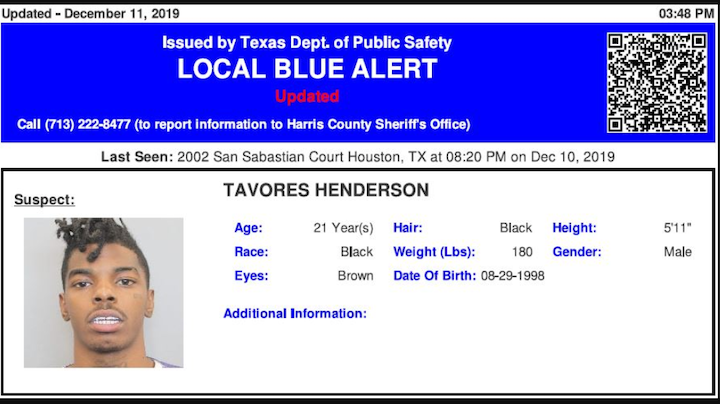 NASSAU BAY, Texas -- A man wanted in the death of Nassau Bay police Sgt. Kaila Sullivan may be headed for Louisiana, according to an alert issued Wednesday night from the Texas Department of Public Safety.

Tavores Henderson, 21, was last seen 1:50 p.m. Wednesday afternoon in Missouri City driving a red Buick, accompanied by a man only identified as "Anthony," the alert said.

The Buick's windows were tinted, and the rear window was busted out, the alert said. Crime Stoppers, The 100 Club and the United States Marshals Services is offering a combined reward up to $20,000 for information leading to his arrest.

Sullivan, 43, died Tuesday night after being struck during a traffic stop on the 2000 block of San Sebastian Court. The nearly 16-year veteran was among a group of officers attempting to arrest Henderson who was wanted on a warrant related to a domestic violence case, Nassau Bay Police Chief Tim Cromie said. Police said that during the stop, the man managed to wrestle free from officers while he was being handcuffed. He got back into his vehicle, and then hit Sullivan as he drove away, Cromie said.

EMS rushed Sullivan to HCA-Houston Clear Lake Hospital, where she was pronounced dead. She would have marked 16 years with the Nassau Bay Police Department later this month, Cromie said.