Jersey City Shaken After Detective Killed in Shootout That Left 2 Gunmen, 3 Others Dead

Detective Joseph Seals was shot and killed Tuesday afternoon after the officer, dressed in plainclothes, approached one of the suspects in connection with a homicide investigation. 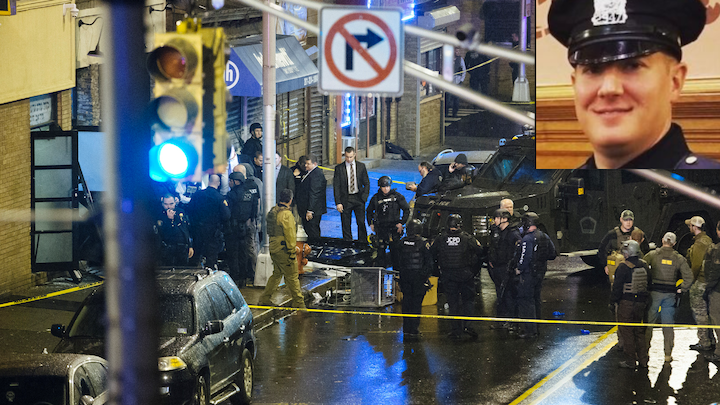 Jersey City Police Detective Joseph Seals, a father of five, was pronounced dead at about 12:45 p.m. Tuesday, after the officer, dressed in plainclothes, approached one of the suspects, reportedly in connection with a homicide investigation.
Angus Mordant/New York Daily News/TNS

JERSEY CITY, New Jersey -- The killing started inside a Jersey City, N.J., cemetery, with a police officer gunned down as he tried to stop two suspicious men.

It ended four hours and hundreds of spent bullets later, with the two suspects killed by police Tuesday afternoon after the pair fatally shot three more victims inside a kosher grocery story in a shootout that paralyzed the Hudson County city.

Students cowered in nearby schools and pedestrians ran for their lives as the pop-pop-pop of high-caliber gunfire echoed down Martin Luther King Drive throughout the dank afternoon.

“Our officers were under fire for four hours,” said Kelly. “We have no inkling what the motive was yet.”

Cops said that terrorism did not appear to play a role in the killings. But late Tuesday, Jersey City Mayor Steven Fulop tweeted that “Based on our initial investigation (which is ongoing) we now believe the active shooters targeted the location they attacked,” adding: “We have no indication there are any further threats.”

Detective Joseph Seals, 39, a father of five, was pronounced dead at about 12:45 p.m., after the officer, dressed in plainclothes, approached one of the suspects, reportedly in connection with a homicide investigation. The heavily armed pair fled in a stolen rental truck, stopping about a mile away and ultimately taking refuge inside the JC Kosher Supermarket.

When the police finally made their way inside the store, both suspects were lying dead along with the three victims whose only crime was shopping in the wrong store at the wrong time. Two other city officers were treated and released for shrapnel injuries, and a dramatic video captured one officer rushing to the aid of a wounded cop as gunfire echoes like cannon blasts in the background.

“They were exchanging shots back and forth, and then they ran into the Jewish market,” said eyewitness Anita Stuckey, 59, a retired paratrooper. “The shooting would stop, then start again … It went on for two hours. It was hard to tell who was shooting at whom.”

Snyder High School sophomore Kenyana Burt, 15, was astounded to see two men firing assault rifles in the street near his school as he left chemistry class for lunch.

“One was across the street, and the other was in the middle,” he recalled. “They were all in black. It was three and four shots, and then it went on and on. We went and hid in the closet.”

The carnage started in the 170-year-old cemetery, where Seals — assigned to remove guns from the streets with the cease-fire unit — spotted the suspicious van, Kelly said. Once Seals was shot, the two suspects bolted in the U-Haul and headed north.

The pair barely made it a mile when police descended on the van, forcing the killers to open fire in the street. Terrified local residents ran for cover, although some bizarrely stayed outside to shoot video with their phones.

“I heard fighting outside, then ‘Boom! Boom! Boom!’” said one worker at the Crown Fried Fish and Chicken store just two blocks from the shooting. “I saw people running outside — men, women, children in the street. These people were scared.”

Dozens of law enforcement agencies — including cops from the NYPD’s elite Emergency Services Units and a department helicopter — descended on the city after the shooting. The gunfire came in wild bursts, with rapid fire blasts followed by 20 or 30 eerie minutes of silence.

A worker at the nearby Good Luck Laundromat recounted the chaotic scene once the shooting began, sending her running for safety in the rear of the business. The 43-year-old employee said she noticed a commotion through the front window before a cop arrived to direct pedestrians on the sidewalk away from the line of fire.

“A police officer started telling people, ‘Get inside! Don’t come out! Stay inside!’” she recounted. “Everyone just did what they told us to do.”

Once inside the store, the shooters began firing randomly through the windows at anyone on the street, officials said. Pedestrians were told to evacuate MLK Drive as the bullets flew, and cops eventually recovered an incendiary device from the U-Haul.

“I have been briefed on the unfolding situation in Jersey City,” said New Jersey Gov. Phil Murphy. “Our thoughts and prayers are with the men and women of the Jersey City Police Department, especially with the officers shot during this standoff, and with the residents and schoolchildren currently under lockdown.”

Nearly a dozen nearby schools were put on lockdown during the shooting spree, with officials giving the all clear around 4:15 p.m.

Eyewitness Brian Martinez, 31, recalled how things went insane in an instant as he tried to help his mother, who uses a wheelchair, out of the car.

“They started shooting,” said Martinez. “There were 15 shots, then at least 15 more. Cops were coming from everywhere. I got out of there as soon as possible. It was a crazy situation.”

Seals’ North Arlington neighbors described him as a loyal family man who took great pride in his police work.

“Our thoughts and prayers are with Joe’s family during this Christmas season and beyond,” Fulop tweeted. “We take for granted sometimes the selfless work a police officer does when they wear that uniform. In the end they are people that volunteered to keep everyone else safe regardless of the circumstance.”