More Than 60 Alleged Gang Members Arrested in "Operation Throne Down'

Federal officials in Boston are announcing federal racketeering, drug and firearms charges against dozens of alleged Latin King members and associates on the East Coast. 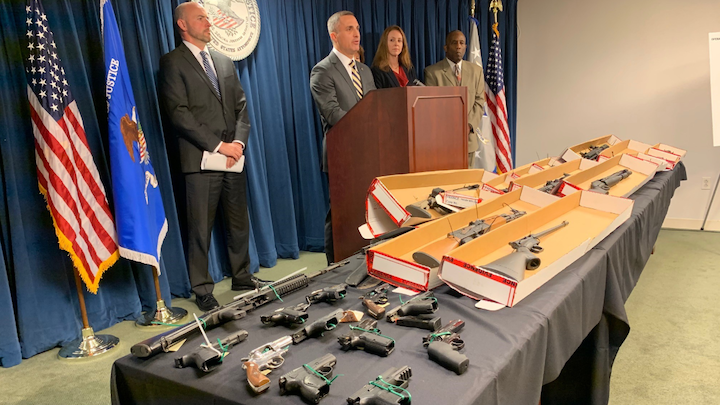 Federal officials in Boston are announcing federal racketeering, drug and firearms charges against dozens of alleged Latin King members and associates on the East Coast.
Federal Bureau of Investigation

BOSTON -- Nearly 60 members of the Latin Kings gang from southern New England, including the East Coast leader with blood ties to the mafia, were arrested in the largest takedown in the FBI’s Boston division’s history Thursday, charged with racketeering for attempted murders, gun and drug offenses, and witness intimidation.

An 190-page affidavit revealed some details of how the investigation unfolded, as three longtime Latin Kings members, among other informants, flipped and became cooperating witnesses in the past five years.

“During this investigation, federal agents were able to intervene and prevent at least 8 murders from happening,” Lelling said.

Michael Cecchetelli, or “King Merlin,” 40, of Springfield, is the gang’s Supreme East Coast Regional Overseer for 14 states and the highest-ranking member arrested. Bonavolonta said Cecchetelli has blood ties to the Genovese crime family, and is responsible for the gang’s significant transformation.

“They have evolved from a traditional street gang to a large-scale criminal enterprise, superimposed with mafia-style rule,” Bonavolonta said. “We believe under Cecchetelli’s leadership, the eastern region of the Latin Kings is currently structured, organized and run like La Cosa Nostra.”

The affidavit also detailed the Latin Kings’ specific impact on the New Bedford community, in which an FBI agent wrote the local chapter was “extremely violent” and has had a “significant negative effect” upon the community.

Lelling referred to details in the affidavit which said the gang wars which played largely in the public eye caused widespread concern, even forcing afterschool activities to be cancelled in fear of gang violence.

“Violence and a known pattern of witness intimidation has emboldened the Latin Kings across Massachusetts, but especially in new Bedford,” Lelling said.

Bonavolonta also said two missing children were found in a New Bedford “trap house,” but could not provide further details.

It was unclear which of the eight defendants named were still not in custody Thursday. Bonavolonta also said ICE did not participate in the investigation, and wasn’t immediately aware of any defendants in the country illegally.