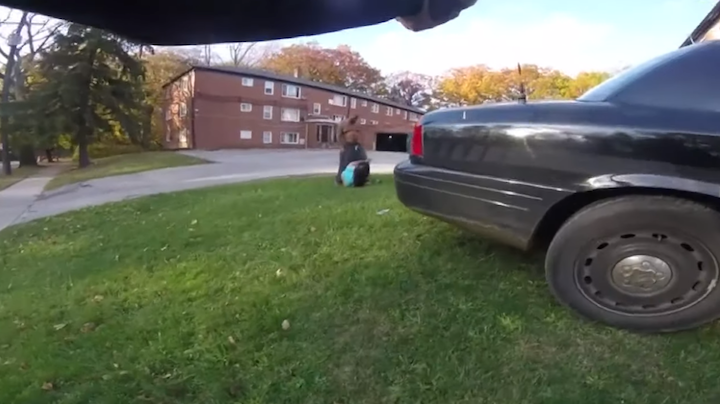 He said officers were called to the area for a woman being raped. The man had shot the woman before police arrived, Gardner said.

Officers fired shots at the man, killing him, Gardner said. Gardner said he expected to release more information later in the night. Agents with the Ohio Bureau of Criminal Investigation are at the scene.

Body camera video of the shooting released by East Cleveland shows an officer speeding to the scene and pulling up in front of the apartment complex near a woman on the ground.

The man walked toward the officer with a gun in his left hand. The officer repeatedly told the man to get on the ground and to drop his gun, the body camera video shows. The man refused and walked up near the woman and as the officer took cover behind his cruiser.

A video of the shooting posted to social media shows the man standing over the woman as several officers stood nearby with their guns drawn.

Cleveland.com is not showing or linking to the video posted to social media due to its graphic nature.

The officers continued shouting at the man to drop his gun, the body camera video shows. The man grabbed the woman by the hair and started to drag her away, the video on social shows.

The man hit the woman in the head with his gun while grasping her hair. The officers then fired 11 gunshots at the man, who let go of the woman’s hair. The woman then crawled toward the officers. The man walked toward the woman.

The man, who was still holding the gun, dropped to the ground motionless as officers fired three more gunshots, the video shows. The woman then got up and walked to the officers standing behind a police cruiser.