Dayton Police Detective Jorge DelRio was shot twice in the face Monday night while serving a search warrant at a home with a DEA task force. 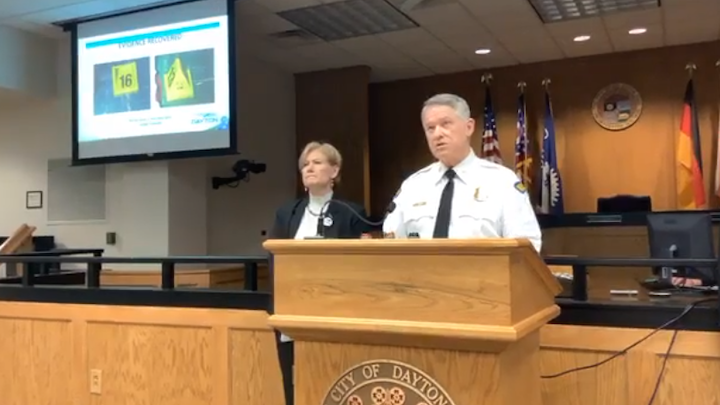 Goddard was charged federally with assaulting a law enforcement officer engaged in a federal investigation, according to a release from United Stated Attorney David M. DeVillers for the Southern District of Ohio.

The charge stems from the Monday night shooting in the 1400 block of Ruskin Road in Dayton during the execution of a federal search warrant.

Goddard also is charged with conspiracy to possess with intent to distribute more than 400 grams of fentanyl, 500 grams or more of cocaine and marijuana.

Two other men also were charged federally with conspiring to distribute the drugs: Cahke W. Cortner Sr., 39; and Lionel L. Combs III, 40, the release stated. They, along with Courtney L. Allen, 34, were arrested after the search warrant was executed Monday night, Biehl confirmed during a news conference Tuesday afternoon.

Detective Jorge DelRio, a 30-year veteran of the department was shot twice during the search and remains hospitalized with “grave” injuries, Biehl said.

The federal Drug Enforcement Agency’s Dayton operation conducted an investigation between mid-July and late October into a Dayton-based fentanyl operation.

As a result of that investigation, Goddard was named as the alleged source of the supply of narcotics, and a federal search warrant was authorized for 1454 Ruskin Road.

At approximately 6:50 p.m. Monday, DEA and Dayton police entered the home and a task force officer, DelRio, descended the stairway to the basement and immediately came under gunfire and was struck.

Also found was nine kilograms of suspected fentanyl inside a duffel bag; a bag containing 50 to 60 pounds of marijuana was found on the basement floor; and approximately $11,000 in cash was spread out on a coffee table and more than $40,000 was inside a duffel bag in a storage area under the stairs, the release stated.

Goddard, Cortner and Combs will be in court Friday for a detention hearing.

Montgomery County Jail records have listed four people who were arrested at a house in the 1400 block of Ruskin Road, where a Dayton police detective was shot and wounded just before 7 p.m. Monday.

None of the men have charges listed, but all were arrested at 1 a.m. today by a federal agency.

Dayton Police Chief Richard Biehl said that officers took five people into custody from the house, but information on the fifth person arrested was not available on the jail records website.

The Dayton detective was at the house as a part of a DEA task force that was serving a warrant when the shooting occurred.

After everyone in the house was taken into custody, the task force recovered a large amount of fentanyl, cash and weapons from the house, Biehl said.