A Gastonia police officer was shot early Friday while working in an FBI operation to serve a search warrant related to a criminal investigation, authorities said. 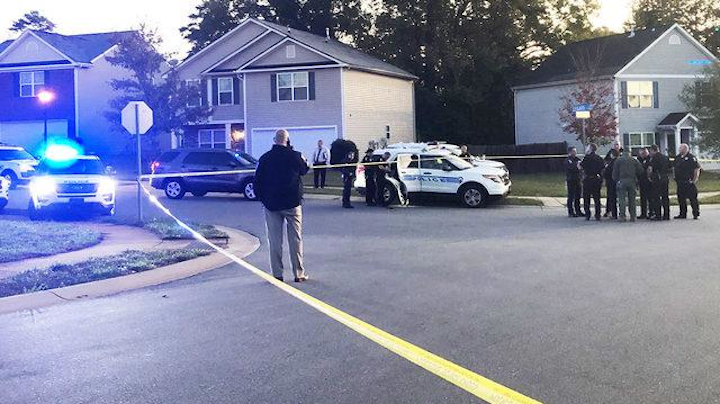 Police investigate after an officer from Gaston County was shot Friday morning in Charlotte while working with the FBI Safe Streets Task Force.
WSOC/Gaston Gazette/TNS

CHARLOTTE -- A Gastonia police officer was shot early Friday while working in an FBI operation to serve a search warrant related to a criminal investigation, authorities said.

The male officer has non-life-threatening injuries, said John Strong, special agent in charge of the FBI’s North Carolina office. Multiple shots were fired, he said, and one person is in custody being questioned about the incident.

The officer who was shot was part of the FBI Safe Streets Task Force, which involves the FBI and local agents who are deputized to work with federal agents. The task force focuses on gangs, drugs and organized crime, Strong said.

The shooting happened at about 6 a.m. in the 4500 block of Oakburn Drive near Old Statesville Road, Strong said.

It was still dark out when shots were fired as officers approached a house, Strong said. About eight to 10 officers, including two from the Charlotte-Mecklenburg Police Department, were there as part of the team of law enforcement serving a warrant.

“We are very thankful these are non-life-threatening wounds,” Strong said. He declined to identify the officer, saying the officer’s family members had not yet been updated on his condition.

“This is not a good day for us, any time one of our officers gets shot,” he added. “When I got that call earlier, my heart did sink.”

Strong said it’s “not clear yet” whether officers returned fire. “That’s potentially what happened,” he said.

Audio from police and emergency first responder radio traffic Friday morning indicates the call of “shots fired” and “officer down” went out around 6:30 a.m.

A female police officer can be heard saying over the radio: “We need Medic ... — now!”

Almost immediately, officials in CMPD headquarters confirmed they were sending multiple police officers from the CMPD North Division to assist.

“They’ve got shots fired. An officer is down. Still trying to figure out what’s going on,” a CMPD officer said on the radio.

Within five minutes, according to emergency radio communications, Mecklenburg Medic arrived. The officer was rushed to a local hospital. It’s unclear whether anyone else was injured.

The person being questioned by authorities lives at the home where the warrant was being executed, according to Strong. He said he could not discuss the case that had brought the officers to the scene.

The FBI and the SBI are jointly investigating the shooting.

Police tape had marked off a home, and neighbors told WBTV that they had seen officers outside their home and in “a standoff.”

The incident happened around the time kids were getting ready for school. Blood could be seen on the pavement near a police vehicle.

This is the second time in recent weeks that a non-Charlotte-Mecklenburg officer has been involving in a shooting in the city. On Oct. 21, two North Carolina probation and parole officers were involved in a shootout but were not injured.

This is a developing story.