Suspect in Custody in Texas Party Shooting That Killed 2, Injured 6

A 23-year-old man was arrested Monday in the deadly shooting near Greenville that left two dead and six others recovering from bullet wounds after a witness came forward and identified the shooter through his Facebook profile.

By Dana Branham and Jennifer Emily
The Dallas Morning News 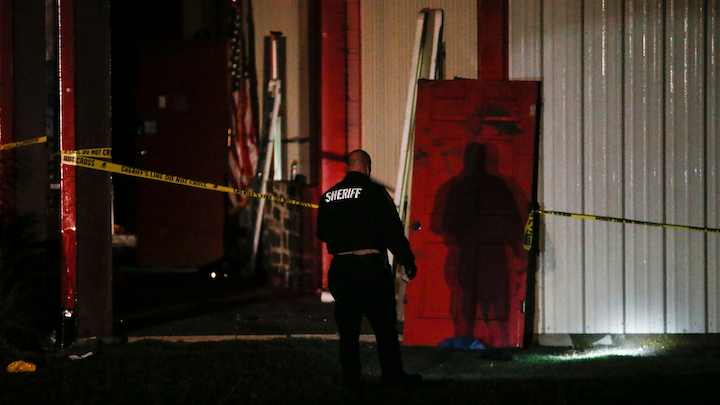 Officials work a crime scene after a shooting at Party Venue on Highway 380 in Greenville, Texas on Sunday, Oct. 27, 2019. As of early Sunday morning, a gunman remained at-large after killing at least two people and injuring 14 at Party Venue Saturday night, according to Hunt County Sheriff Randy Meeks.
Ryan Michalesko/The Dallas Morning News/TNS

COMMERCE, Texas — A 23-year-old man was arrested Monday in the deadly shooting near Greenville that left two dead and six others recovering from bullet wounds after a witness came forward and identified the shooter through his Facebook profile “Fml Jefe,” according to an arrest warrant affidavit.

The witness, through an attorney, led law enforcement to Brandon Ray Gonzales, who was being held at the Hunt County jail on a capital murder charge in the deadly shooting at an off-campus party celebrating Texas A&M-Commerce’s homecoming. Bail was set at $1 million.

Hunt County Sheriff Randy Meeks said at a news conference Monday that his office, the Texas Rangers and federal officials had not yet determined a motive. Meeks said Gonzales was arrested at a local auto dealership where he works. He declined to name the business.

No other arrests are anticipated, Meeks said.

The sheriff’s office identified the two victims slain as Kevin Berry Jr. of Dallas and Byron Craven Jr. of Arlington, both 23. On Sunday, four of the six others shot were in critical condition. Others received minor injuries while trying to escape.

Gonzales has been cooperative, Meeks said, but has not admitted to being the shooter at the The Party Venue, which is along rural U.S. Highway 380. The location is about 15 miles southwest of the Commerce campus, which is about 65 miles from Dallas.

Gonzales did tell authorities that he was at the party, Meeks said. He has not offered information about whether he has any connection to the victims, the sheriff said.

In a jailhouse interview with WFAA-TV (Channel 8), Gonzales denied being the shooter. He said he attended the party but was in his car outside when the shooting occurred.

The witness said it appeared that Gonzales “was intending to kill because he pointed his gun at people’s head,” according to the affidavit. After Gonzales opened fire, Berry fell onto the witness, the affidavit states. The witness turned over their jacket to authorities, as it had a large amount of Berry’s blood.

Meeks said it appeared that the first person shot was a target of Gonzales’, but then the rest appeared to be fired at randomly. The sheriff did not say who was shot first.

He said authorities were able to identify Gonzales as the suspect through tips from the community and “pushing and pushing” from investigators. Several law enforcement organizations, including the Texas Rangers, were called in to assist with the investigation.

Gonzales responded, saying “100 100 preciate that bro that jus how I rock if I fw anybody,” according to the affidavit.

The owner of The Party Venue, Heath Jackson, said Monday that the man who rented the facility told him he was having a Halloween party for friends. Jackson said the man, whom he did not identify, was not upfront about the type of party or that he planned to charge admission.

Jackson said his venue typically hosts events such as reunions, birthday celebrations, holiday parties and quinceañeras. Going forward, Jackson said, he will host “family-sanctioned events only.” Jackson also said he has donated use of the space to groups such as shelters for abused women.

“We are just devastated by this and the loss of life,” he said. “We’re really shaken up.”

Texas A&M-Commerce confirmed that four of its students had been treated and released from hospitals. Saturday night’s “Twerk or Treat” costume party, attended mostly by people in their teens and early 20s, had been promoted as a homecoming event but wasn’t university-sanctioned.

On Monday, additional security measures were in place at Greenville High School after a student working at a fast food restaurant overhead a customer say a similar act of violence would occur at the school. District officials said police told them there was no reason to believe the threat was viable. But officials increased security at the school out of precaution, according to a letter sent to parents.

Alexandria Cox, a 19-year-old who’s studying social work at Texas A&M-Commerce, was at the party with her cousin and her friend when gunfire broke out. They took off after they heard the gunshots, pushing themselves through the door as people scrambled to get out. Later, Cox realized her costume was stained with someone else’s blood across her chest from pushing through the crowd.

Cox’s friend Tamiyah Spigner, who is also studying social work, didn’t attend the party. She said she was glad she trusted her intuition — something had told her not to push herself after a long day.

It’s still becoming real to Spigner that the shooting happened so close to where she grew up in Sulphur Springs.

Both women were disappointed in the university’s response to the shooting. They said they wished officials had declared a “grieving period” of a week to give students time to heal away from classes. Although classes were in session Monday, few students showed up, Cox said.

Monday evening, the university canceled all classes Tuesday and Wednesday.

“We feel like if it was another group of race that was at the party that was predominantly there … they would have canceled it,” said Cox, who is black. “We still have to go and attend classes.”

She said students are still working through the trauma of what they witnessed. One of her friends who had been shot was in surgery Monday, she said.

Cox said that she’s putting processing what she saw on the back burner but that she knows she’ll have to deal with it eventually.

“I’m a leader on campus,” said Cox, a resident adviser who also runs a student organization that teaches students life skills such as cooking, sewing and filing taxes. When other students have come to her asking what to do next, she doesn’t have an answer for them, she said.

A vigil planned for Monday afternoon at the university’s amphitheater was canceled after input from students, the university announced. But before the event was canceled, students organized a small prayer gathering at noon, said the Rev. Brian Dierolf, the Wesleyan campus pastor.

“Based on conversations we have had with various students across campus, the decision has been made to postpone the community gathering,” the school said on Facebook. “We appreciate the feedback you have provided, and care about your concerns. We remain committed to the health and well being of our campus community.”

At a vigil Sunday in Dallas for friends and relatives of Berry’s, people ran for cover when gunfire erupted. Dozens of shots were heard, but no injuries were reported. Dallas police said Monday they were investigating the incident. A man was detained after police said he tried to evade them in his car. But police had not determined whether he was connected to the gunfire.

Before the fatal shooting at the party on Saturday, Hunt County deputies were already at the venue investigating complaints about illegal parking. They arrived about 20 minutes before the gunman opened fire. Deputies were questioning a person outside the front of the venue who they believed was intoxicated when they heard gunshots coming from the back of the building.

At first, they couldn’t tell whether the shots were fired inside or outside. But they found Berry and Craven when they entered, authorities said.

Meeks, the sheriff, said the party became “complete chaos” as people tried to flee the gunman, with some breaking through windows and others trying to squeeze through the venue’s front door four abreast. Six people suffered cuts and bruises while they were trying to escape.

The gunman fled during the commotion.

“During the past 24 hours, Hunt County has had a wake-up call to our small town way of life just like so many other communities have, small or large,” Meeks said at Monday afternoon’s news conference.