An off-duty Houston police sergeant working an extra job at a Midtown business on Monday opened fire on a man who was pistol-whipping and robbing a homeless person across the street, police say. 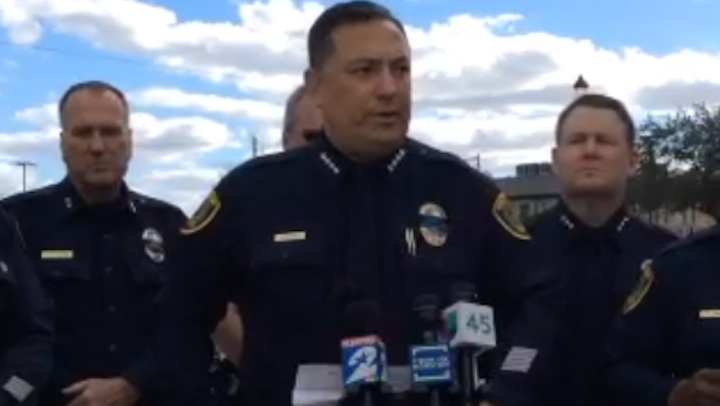 The sergeant, who was not immediately identified, around 1 p.m. spotted the struggle on Hadley Street while working at a mid-rise business office in the 2200 block of Fannin, according to Houston Police Chief Art Acevedo.
Houston Police Department

HOUSTON -- An off-duty Houston police sergeant working an extra job at a Midtown business on Monday opened fire on a man who was pistol-whipping and robbing a homeless person across the street, police say.

The sergeant, who was not immediately identified, around 1 p.m. spotted the struggle on Hadley Street while working at a mid-rise business office in the 2200 block of Fannin, according to Houston Police Chief Art Acevedo. Once the sergeant realized what was happening, he ran across Fannin and confronted the man, who raised the pistol toward the officer, Acevedo said.

The Houston Police Department originally tweeted that the suspected robber shot at the officer, but Acevedo said investigators are working to determine if that actually happened.

A witness told the sergeant that the gunman did open fire, but that witness — as well as the victim in the robbery — fled the scene before more officers arrived to help. Neither had been located as of Monday afternoon, Acevedo said.

The sergeant fired his gun once, striking the suspect, Acevedo said. The injured suspect threw the gun in a nearby storm drain and fled a block south to a waiting car, which police believe took him to Memorial Hermann Hospital in the nearby Texas Medical Center, Acevedo said.

He was in surgery as of mid afternoon. His condition was not known.

Because he was working an extra job, the sergeant was not wearing a body-worn camera, Acevedo said. HPD officers working extra jobs do not wear bodycams unless they are working security at places where alcohol is served, like bars, Acevedo said.

He will be placed on administrative duty until an internal investigation is finished.