After what may or may not have been a routine traffic stop, Steve Braithwaite says a state trooper handed him back his driver’s license, along with a folded Andrew Jackson around it. 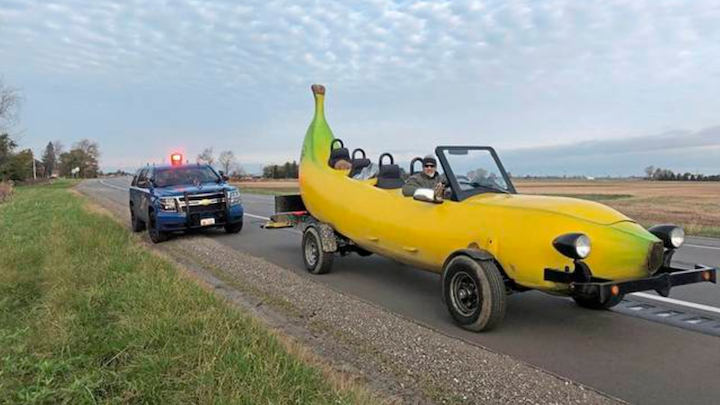 After what may or may not have been a routine traffic stop, Steve Braithwaite says a state trooper handed him back his driver’s license, along with a folded Andrew Jackson around it.
Michigan State Police

ADRIAN, Michigan — Normally, at least on the big screen, the $20 bill gets slipped to the police officer in the hopes one may get out of a ticket.

Part-time Kalamazoo resident Steve Braithwaite, the owner and creator of the “Big Banana Car" was recently on the receiving end of the reverse of such an occurrence.

After what may or may not have been a routine traffic stop, Braithwaite says a state trooper handed him back his driver’s license, along with a folded Andrew Jackson around it. It all went down just 15 miles into Braithwaite’s 1,400-mile trip to Victoria, Texas, he said.

“I did what we all do when we pass a cop on the side of the road, I looked in my mirror to see if he started moving or not,” he said. “I knew I hadn’t done anything wrong. I certainly wasn’t speeding."

Braithwaite said the trooper started asking him questions, and believes that after learning Braithwaite had been everywhere from Los Angeles to Key West, Montana, Burning Man and beyond in the car, the trooper must have come to the conclusion it was street legal as Braithwaite didn’t have any tickets showing otherwise.

The trooper would have learned that after he ran Braithwaite’s plate, which reads “SPLIT.”

Braithwaite also said the sign on the back of his car that says he is “couch surfing and offering rides” to fund his trip, may have prompted some unexpected good will.

“He checked my headlights and my indicators and when he asked for my license, I accidentally gave him my debit card and we both looked at each other and we had a good laugh,” said Braithwaite, who is originally from Oxford, England. “I think he might have thought I was trying to buy my way out of a ticket, but then realized it was just an accident.”

When he came back, he presented Braithwaite with his license wrapped in a $20 bill and wished him “safe travels,” Braithwaite said.

Braithwaite then headed on to Bowling Green, Ohio with no further incidents. After “completely rebuilding his carburetor” in Bowling Green, he pointed the giant banana southwest and cruised on down to Texas, making it in less than two day’s time.

No slow poke, the banana car reached speeds of 85 mph on the journey, but as the hot rod mechanic said, “it was in Texas, where the speed limit was 80, and I was still the slowest one on the road.”

Braithwaite said he’ll spend his winter and spring in Texas before returning to Kalamazoo next summer. While down there, like he does each year, he’ll attend art car parades in Victoria and Houston. The Houston Art Car Parade claims to be the world’s largest.

There, he’ll drive alongside the likes of a telephone car, a two-story robot car, a peacock car and more, Braithwaite said.

The banana car, he said, took top honors at the Houston parade a few years back in a category that pits cars and trucks that were once regular cars or trucks that became completely transformed to look nothing like the original.

Braithwaite, who makes his living offering rides in the car, is in the process of hopefully supplementing that living by writing a children’s book about the big banana’s trials, travels and tribulations. He said the writing is all done, and he is currently collaborating with Portage artist Anthony Snyder on the illustrations.

“Driving the banana car is the most fun in the world but every time I stop for petrol I have to learn how to walk again,” he said.

Beginning this spring, Braithwaite has plans to start donating some of his profits each week to help out a different “go fund me” child with medical needs.

“I’ll probably choose one day each week, like Saturday, and give all the money to help a child cover medical costs because they don’t have insurance. It’s just the saddest thing when you see that,” he said.

“The banana car isn’t political and I don’t ever want it to be, but I think America needs to have a national health care system like everyone else. Everyone deserves healthcare. That shouldn’t be a political issue."