NYPD Officers Go Above and Beyond to Help Homeless Man

When a Chelsea pooch chomped on a homeless man’s hand last month, two 10th Precinct cops came to his aid — and this weekend, the two dropped about $200 of their own cash to fix him up with a spiffy new haircut, a pair of glasses and a brand new suit. 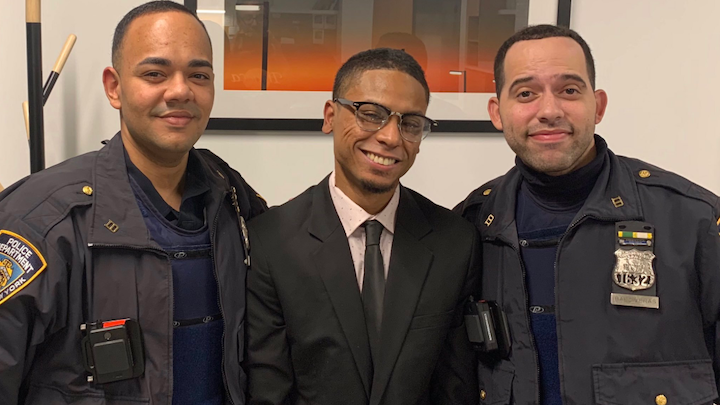 When a Chelsea pooch chomped on a homeless man’s hand last month, two 10th Precinct cops came to his aid — and this weekend, the two dropped about $200 of their own cash to fix him up with a spiffy new haircut, a pair of glasses and a brand new suit.
New York Police Department

When a Chelsea pooch chomped on the homeless man’s hand last month, two 10th Precinct cops came to his aid — and this weekend, the two dropped about $200 of their own cash to fix Wilfredo up with a spiffy new haircut, a pair of glasses and a brand new suit.

“They always tell me something new about what they’re doing to get me out of the streets and get my life back,” said Falman, 34, as he fought back tears during an interview with the Daily News. “I’ve only known them for a month, but they’re very professional. I love them.”

Gone are his unruly mop of hair and his basic black T-shirt, replaced by a closely-cropped new hairstyle, a white collared shirt, and a black suit with matching tie.

“I’m feeling really good,” said Falman, who bounced in and out of homeless shelters and trouble over the last six years. “They helped me through the rough times. They’re really good officers.”

The NYPD partners first met Falman when they answered a call about a dog bite victim. A quick check showed the homeless man had two outstanding warrants against him, and there were complaints about his unwanted presence near the Starbucks on Seventh Ave. and W. 15th St.

“It was sad seeing him,” recounted Baez. “We made it our business to help him out, and Wilfredo has been excellent in wanting to change his life.”

Falman went to court and cleared his warrants, impressing the two cops with his effort. The officers began checking in with the homeless guy on a daily basis, buying him meals and steering him in the right direction. They even reached out to Wil’s mother in Puerto Rico, and she provided her son with a cellphone to stay in contact with her and the cops.

Their boss, Capt. Kevin Coleman of the 10th Precinct, hailed the two officers for their work as Neighborhood Coordination Officers (NCOs).

“They dealt with Wilfredo in a compassionate manner and made a real connection with him,” he said. “One of our missions in the 10th Precinct is to continue to widen our reach with the public.”

Hiring? Meet Wilfredo!#Neighborhoodpolicing Officers Baez & Roman met Wilfredo after responding to a complaint of homelessness. Through compassion they made a connection with him, got him a haircut & bought him a suit to help him land a job.@NYDailyNews @nypost @NYPDnews @NY1 pic.twitter.com/EbHatxtopB

The Puerto Rican immigrant arrived in New York in 2002, enrolling in William Howard Taft High School in the Bronx. The aspiring actor/rapper instead dropped out of school and found himself on the street by 2013.

He spent some time in Chicago with a niece, only to return to the city when he couldn’t find job in the Windy City. Back on the streets, he suffered another setback last month when a suitcase holding all his possessions was stolen.

“These streets broke me,” he admits. And then Baez and Ricardo stepped in to rebuild him — to the point where the homeless man hopes to turn his life around and make his mother proud.

“We’re trying to let people know that homelessness is not a crime,” said Baez. “We need to do our best to assist them, if they want to be assisted.”