A 7-year-old girl dressed as a ladybug was shot in the chest as she was trick-or-treating on the Southwest Side on Thursday evening, according to Chicago police. 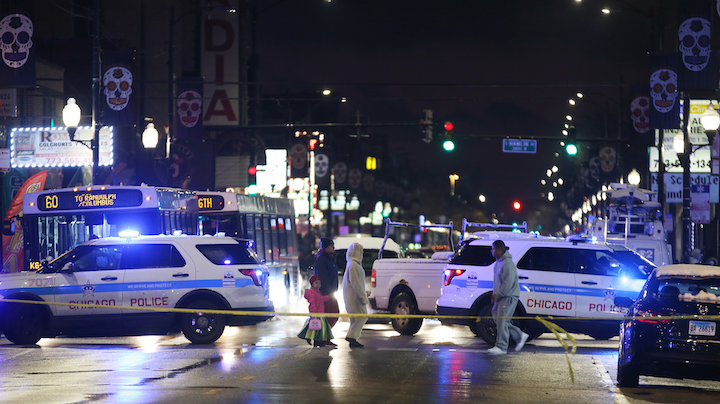 Trick-or-treaters walk past a crime scene in the 3700 block of West 26th Street in Chicago, where a 7-year-old girl was shot while trick-or-treating on Thursday, Oct. 31, 2019. The girl, dressed as a ladybug, was taken the hospital in critical condition with a chest wound.
John J. Kim/Chicago Tribune/TNS

CHICAGO — A 7-year-old girl dressed as a ladybug was shot in the chest as she was trick-or-treating on the Southwest Side on Thursday evening, according to Chicago police.

The girl was taken in critical condition to Stroger Hospital. A 31-year-old man near her but of no relation to her was hit in the left hand and taken in good condition to Mount Sinai Hospital, fire officials said.

The shooting happened around 5:30 p.m. as the girl was walking with other trick-or-treaters on the sidewalk on West 26th Street in the Little Village neighborhood when someone across the street drew a gun and opened fire, police said.

“We heard the shots … four shots, and I went outside,” said Lali Lara, who works in a cellphone store. “The girl’s father was screaming, ‘My little girl’s been shot.’ ”

Lara said she rushed the little girl and her family inside the store. Lara said she held the girl’s hand while pressing against her chest to stanch the bleeding.

“I was pressing on her and calling her name,” Lara said. “She was looking at me, and I was calling her name. I have kids — I would go crazy if something happened to my kids.”

After about five minutes, an ambulance arrived.

Police had no description of the gunman, and no one was in custody.

The store was dark, and a few people, including a little boy dressed in a costume, walked by around 7:30 p.m.

Outside Stroger by 8:30 p.m., a group of extended family and friends gathered. Some were in tears.