Videos released by the Texas Department of Public Safety on Tuesday show that a 27-year-old man shot by two troopers after a traffic stop last summer was holding a gun. 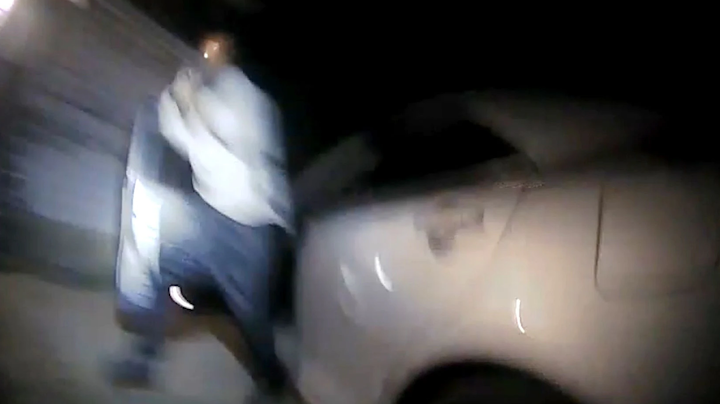 DALLAS -- Videos released by the Texas Department of Public Safety on Tuesday show that a 27-year-old man shot by two troopers after a traffic stop last summer was holding a gun.

The footage comes from the body camera and dashboard camera of two troopers who stopped Schaston Hodge on Aug. 17, 2019, in South Dallas. They began pursuing him after he failed to signal a left turn and led the troopers on a brief chase.

The pursuit ended when troopers followed him into his grandmother’s driveway, and the situation escalated quickly. As Hodge gets out of his car, he is seen holding a gun. At that point, shots are fired and he falls.

The DPS troopers involved were identified as Joshua Engleman and Robert Litvin. Both were placed on paid leave following the shooting. In November, a grand jury declined to indict them. It is unclear whether they have returned to work.

The release of three videos comes after The Dallas Morning News first reported the details of Hodge’s autopsy on Friday, which showed he was shot 16 times.

Night of the shooting

The more-than-20-minute video includes another interaction before Hodge is fatally shot within seconds.

Immediately before the troopers began following, then chasing, Hodge’s car, they had pulled over a car carrying two men. It is unclear why the men are pulled over, but after Litvin handed the driver a piece of paper, one of the men praises the two officers.

“It’s been an honor meeting you guys,” the unidentified man says. “You guys are awesome. Man, the guys we’ve been previously with have never been nothing like this — at all.”

Litvin listens to the man’s comments. Litvin adds that the highway patrol does things “a little bit different.”

“I want you to enjoy the rest of your night. Again, please be safe, get home,” Litvin responds.

“Y’all guys be safe,” the man says before getting into the car.

The troopers then return to their squad car. About a minute later, they see a silver Toyota Camry in the distance that turns left without signaling.

Hodge speeds up, and the troopers engage in a chase that lasts about three minutes. Hodge pulls the car into his grandmother’s driveway near the back door. The troopers pull in behind him, and Engleman runs out first. Litvin runs behind.

Hodge is holding a gun when he gets out of the car. It is not clear from the footage whether Hodge fired his weapon. Engleman falls down and shoots up at Hodge. Litvin fires his weapon at Hodge, too. A few more shots are fired as Hodge is down.

Engleman runs back to the squad car to get a medical bag, runs back, and the two officers attempt to resuscitate Hodge. His gun is nearby on the ground.

“Stay with me, come on,” Litvin says to Hodge.

Hodge’s grandmother opens the back door to find the troopers and Hodge’s body on the ground. She screams.

“Ma’am, shut the door. We will see you out front,” someone shouts.

Litvin tells Engleman to “check himself.” “I thought you got shot, brother,” he said.

Neither of the troopers were injured during the incident, a DPS spokesman said.

The troopers were patrolling the area after Gov. Greg Abbott decided to deploy state troopers to help an understaffed Dallas police force amid a spike in violent crime over the summer.

But while some welcomed the aid, there also were accusations of over-policing and racial profiling. The joint operation, called Operation D-Town, ended Sept. 1.

After the fatal shooting of Hodge, DPS was slow to release information.

The first involved the case of Sandra Bland, a 28-year-old black woman who was stopped in Waller County for failure to signal. Initially, DPS said Bland assaulted the trooper. Claims from DPS trooper Brian Encinia were later contradicted through the release of video that Bland filmed herself of the incident. His charges were later dropped.

“I want to make it as certain as possible that fact finders have as much information as possible,” West said.

An autopsy by a Dallas County medical examiner showed Hodge was shot in the head multiple times, five times in the chest and four times in the back. He was also shot in the right and left thigh. The autopsy also showed he had marijuana in his system and his alcohol level was above the legal limit.

His mother, Shandra Brackens-Hodge, expressed outrage Friday in a statement released by her attorney, Temani Adams of Dallas.

“They killed my son like he was an animal,” Brackens-Hodge wrote. “They shot my son 16 times, they almost blew his head off.”

John Snider, an attorney representing the two troopers, said Engleman and Litvin’s actions were justified the night of the shooting.

“They didn’t fire an excessive amount of rounds,” Snider said. “They responded in defense of their lives.”

Adams, the family’s attorney, refuted DPS’ assertion in its report to the attorney general that Hodge shot at the troopers. Brackens-Hodge in a statement said her son was legally allowed to have a gun and did not deserve to die over a traffic stop.

“He pulled into his driveway,” she wrote in a statement. “Why did they get out with their guns drawn?”

Authorities have released surveillance and body camera footage of a man who shot at two people, one fatally, in a Long Beach sports bar in October before police arrived and shot him dead.
Dec 23rd, 2019

Harris County deputies at Precinct 5 are getting some much-deserved love after they put their lives in danger to pull a man from a burning car.
Dec 23rd, 2019

After about 30 seconds of running back and forth on a street with two San Francisco police officers chasing him with guns drawn, Jamaica Hampton came within feet of Officer Sterling Hayes, who fired six rounds at him, the video shows.
Dec 19th, 2019

Body-worn camera footage released by the NYPD Friday on YouTube captures the frantic chase that ended with a cop and a criminal suspect shot dead in the Bronx by police bullets.
Dec 16th, 2019

Body camera video released by the Fontana Police Department showed how a standoff between an officer and a suicidal man — who called 911 on himself — ended without tragedy.
Dec 13th, 2019 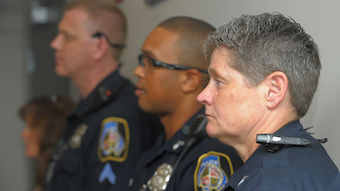 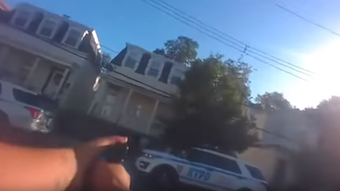 The NYPD on Friday released dramatic body camera footage that shows the moment a Staten Island man pulled out a gun and shot at police officers, sparking a wild gunfight that left the suspect dead and one cop shot in the hand.
Nov 26th, 2019 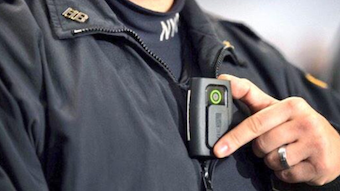 Video released Monday shows footage of Fort Worth police officers rescuing an 8-year-old girl who had been kidnapped by 51-year-old Michael Webb while walking with her mother in May.
Nov 19th, 2019

Video: Lizard Leaps at Officer During Search of Man's Coat

A Northern California police officer gets the shock of her life when a lizard leaps from the coat pockets of a man during a routine search, a body camera video shows.
Nov 12th, 2019