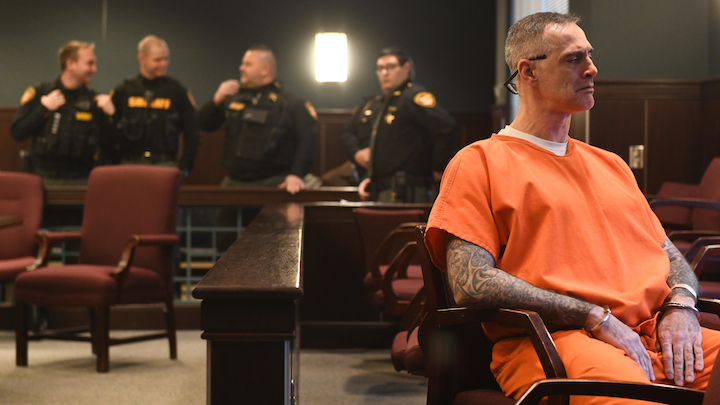 Jay Brannon, 45, of Atwater, enters a guilty plea for attempted aggravated murder, aggravated arson, felonious assault and forgery. Jay Brannon, waiting in jury box for proceedings to begin, turned away from the mulitple officers as he quietly cried.
Lisa Scalfaro/Record-Courier/TNS

Brannon wiped away tears during the hearing as did members of the sheriff's office who filled nearly the entire front row of Judge Becky Doherty's courtroom. Acklin attended the hearing with his wife, Josee Acklin, who works for the Streetsboro Police Department, Portage County Sheriff David Doak and Portage County Major Larry Limbert, as well as other Portage County sheriff deputies.

Neither Brannon nor Acklin spoke during Tuesday's hearing.

On Feb. 14, 2019, three deputies, including Acklin, and two officers from the Northeast Ohio Medical University were serving felony warrants on Brannon about 6:43 p.m. after a source told them Brannon was at a Rootstown Township home on Route 44. Brannon threw a canister of flammable liquid at Acklin and set it on fire, burning about 20% of Acklin's body. Acklin had second and third-degree burns and was hospitalized. Other officers were also injured, though not as badly as Acklin.

Acklin joined the sheriff's office in 1997 and was promoted to sergeant in 2017.

Doak told the Record-Courier at the time of the incident Brannon threatened he was going to "kill the cops" when confronted by officers inside the garage.

One of Brannon's attorneys, Erik Jones, thanked the Portage County Sheriff's Office for allowing Brannon to have a private conversation with his parents while Brannon was being held in jail during the plea negotiations.

Sentencing is set for Monday at 1 p.m.