Six suspected gang members have been arrested in a shooting that killed four people and injured several others during a Nov. 17 backyard party, the Fresno Police Department said Tuesday. 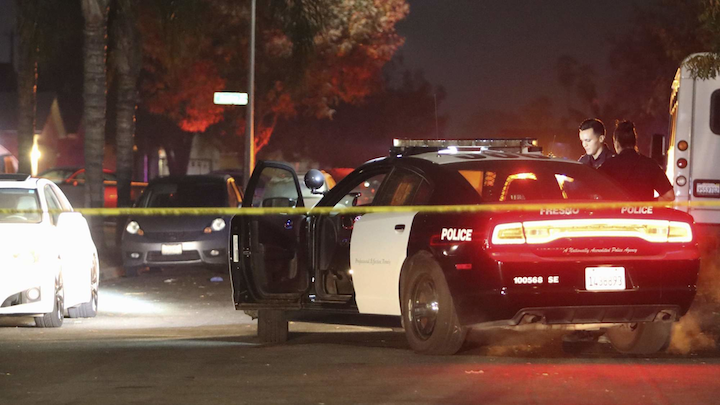 Photo police work at the scene of a mass shooting in southeast Fresno on Nov. 17.
LARRY VALENZUELA/THE FRESNO BEE

FRESNO, California — Six suspected gang members have been arrested in a shooting that killed four people and injured several others during a Nov. 17 backyard party, the Fresno Police Department said Tuesday.

Fresno Police Chief Andy Hall said the suspects are all self-admitted Mongolian Boys Society gang members and that they carried out the shooting to retaliate against rival gang the Asian Crips, who they believed was responsible for the death of a member of their gang.

At least one of the people who attended the backyard party was a former member of the Asian Crips, Hall said.

Police are still investigating if any other partygoers were members of the Asian Crips, Hall said. He would not say if any of the dead or wounded from the mass shooting were Asian Crip members.

"We see them as victims," Hall said during a New Year's Eve news conference announcing the arrests.

Police are still investigating the murder of Randy Xiong, 28, the earlier killing they believe inspired the mass shooting 16 hours later.

A person of interest in the case, Sia Vang, 23, remains at large and officers are asking the public to come forward if they have any information.

All six men are being held on $11 million bail and could face the death penalty, the Fresno County District Attorney's Office said.

Law enforcement conducted 19 search warrants during the investigation. With help from the ATF, Fresno police determined that one murder weapon was stolen from Oklahoma and the other was from Arizona, Hall said.

One of the murder weapons was discovered by Clovis police during a mail theft investigation, Hall said.

Billy Xiong of Fresno was arrested on suspicion of mail theft on Dec. 17, and authorities found one of the weapons used in the killing of the four men, Hall said. His brother, Randy Xiong, was the gang member who was slain 16 hours before the mass shooting took place.

Besides the two guns used in the attack, authorities also recovered 12 other weapons and $46,000 in cash believed to be tied to drug activity.

The chief and Fresno Mayor Lee Brand said the arrests could "bring closure" to the families of those slain and the Valley's Hmong community.

"We will work hard to bring peace and comfort to the city of Fresno as we close the page on a very difficult year," the mayor said of the "terrible event that shook Fresno to its core."

"The promise of protection can't stop with arrests," Brand said. "We have to remain vigilant and stay alert."

In the Nov. 17 shooting, at least two suspects entered a backyard in southeast Fresno and opened fire at the home, about a half-mile from the Fresno Airport. The killings brought sudden attention to one of the nation's largest Hmong communities, which had been left reeling as police searched for the suspects and motive.

Thao is survived by two daughters and a pregnant wife, according to a GoFundMe site. Vang supported his parents and younger siblings with earnings from his job delivering clinical lab results. Xiong, who lived in the home where the shooting occurred, was a gregarious sushi chef who loved hosting parties. He is survived by his wife and young daughter.

Both Vang and Xiong were children when they moved to the United States from Thailand as part of refugee relocation efforts.

Many Hmong immigrants in California are survivors of the so-called Secret War that followed the 1975 collapse of Laos. The Hmong people fought alongside U.S. troops against communism during the Vietnam War, marking them as targets after the Laotian communist government took over.

Fresno police reported that the suspects had automatic weapons and snuck into the backyard party while a group of people were watching the Los Angeles Rams-Chicago Bears Sunday Night Football game.

About 35 people were in attendance when the shooting began. The suspects opened fire on the 16 people in the yard, while the rest of the partygoers — mostly women and children inside the house — were unharmed.

Multiple shell casings were collected at the scene, indicating there were multiple shooters.

"This is a dark day for our community," said Pao Yang, CEO of the Fresno Center, which focuses on the Hmong community. "Our community is in mourning."

The Associated Press contributed to this report.