Richard Murray-Burns was charged with aggravated attempted murder on Wednesday after the pursuit on Dec. 22 that started in Waterville and ended in the Somerset County town of Canaan. 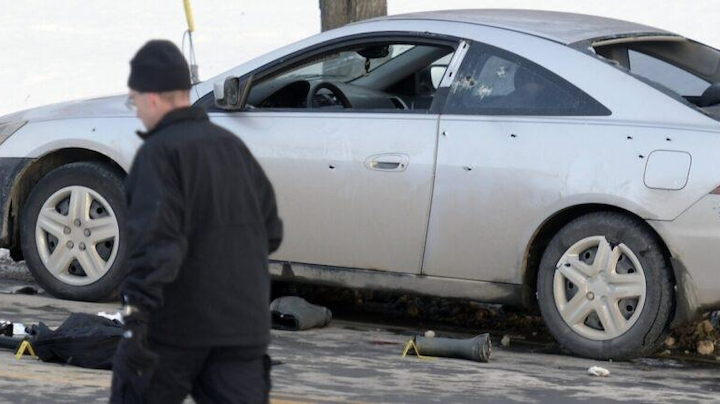 An investigator walks by a car that was pockmarked with bullet holes during a shootout Sunday in Canaan, Maine.
Andy Molloy/Kennebec Journal/TNS

SKOWHEGAN, Maine — The Hartland man who allegedly shot and wounded a police officer during a multi-town pursuit two weeks ago made his first appearance in court on Thursday.

Richard Murray-Burns, 29, was charged with aggravated attempted murder on Wednesday after the pursuit on Dec. 22 that started in Waterville and ended in the Somerset County town of Canaan. Prosecutors recommended that Murray-Burns be held on $1 million bail, and his defense attorney, Pam Ames, said she would review the proposed bail conditions.

Aggravated attempted murder is a Class A crime that could carry a life sentence.

Police argued in a complaint filed in court that the shooting of Waterville police Officer Timothy Hinton met the conditions outlined in Maine law for an aggravated attempted murder charge. Murray-Burns’ intention was to cause multiple deaths, his crime was committed against an on-duty police officer and there was some degree of planning that went into the offense, the complaint from Hugh Landry of the Maine State Police said.

The pursuit started after Hinton stopped a car on Route 201 after police received a shoplifting complaint from the nearby Walmart in Waterville. After Murray-Burns allegedly shot him in both arms, Hinton and other police officers started pursuing his car. The chase ended on Route 2 in Canaan, when eight officers shot at Murray-Burns.

Murray-Burns had been hospitalized at Northern Light Eastern Maine Medical Center in Bangor for gunshot wounds since the Dec. 22 shootout. After he was released Wednesday, he was arrested and taken to the Somerset County Jail in Madison, according to Maine State Police spokesman Stephen McCausland.

Hinton was treated at the Thayer campus of MaineGeneral Medical Center in Waterville, and he was released later on the day of the shootout.

The eight police officers from four different agencies — the Waterville Police Department, Maine State Police, Somerset County Sheriff’s Office and Winslow Police Department — who shot at the suspect were placed on administrative leave with pay. The Maine Attorney General’s office is investigating the incident, as it does after every police-involved shooting.