Arrest Made After Brutal Attack, Kidnapping Caught On Doorbell Camera in Las Vegas

A doorbell camera captured a vicious attack on a woman who was kidnapped in Las Vegas minutes into the new year. 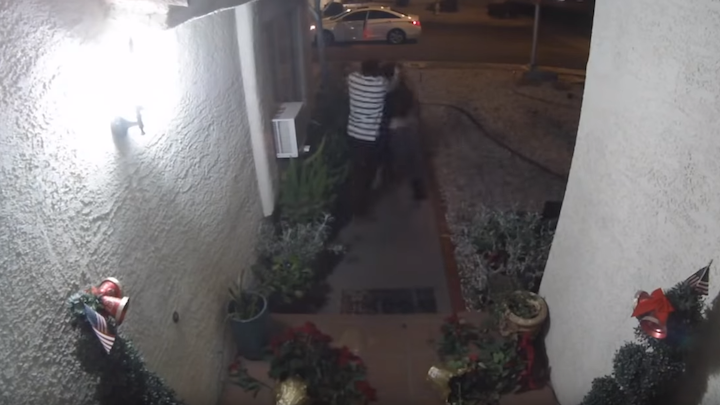 A doorbell camera captured a vicious attack on a woman who was kidnapped in Las Vegas minutes into the new year, leading to an arrest just a day later.
Las Vegas Metropolitan Police Department

LAS VEGAS -- A doorbell camera captured a vicious attack on a woman who was kidnapped in Las Vegas minutes into the new year, leading to an arrest just a day later.

The homeowner, who watched the incident unfold in real time through the surveillance system, called police around 12:45 a.m. Wednesday to report the disturbing scene, authorities said.

The video shows the victim running from a white sedan toward the house and banging on the door while crying and screaming for help. The driver, whose exact relationship to the woman was not immediately clear, then gets out of the car, runs toward her and begins to assault her.

The footage shows him hitting her, throwing her to the ground and even kicking her.

“Why would you f---ing do that?” the unhinged assailant yelled while dragging the victim and telling her to go back to the car.

The man then grabbed her and brought her back into the vehicle before speeding away, according to the video, which was shared on the Las Vegas Police Department’s YouTube channel this week.

The images helped police locate both a suspect and the victim, who was found safe, just about 24 hours later, local Fox station KVVU-TV reported.

The suspect, Darnell Rodgers, was taken into custody Thursday morning and charged with kidnapping, domestic battery, disorderly conduct, speeding and driving without a license, according to Clark County’s online jail records. He’s scheduled to appear in court Friday.