Cadets of the West Virginia Division of Corrections and Rehabilitation Basic Training Class No. 18 performed Nazi salutes as part of their training dating back to the early weeks of boot camp, state investigators have found. 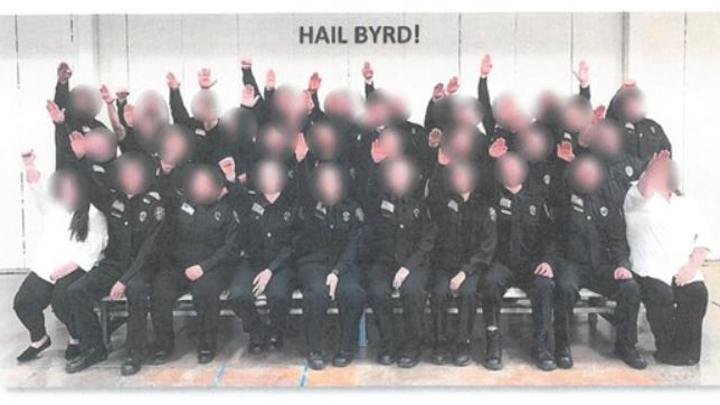 Cadets of the West Virginia Division of Corrections and Rehabilitation Basic Training Class No. 18 performed Nazi salutes as part of their training dating back to the early weeks of boot camp, state investigators have found.
West Virginia Department of Military Affairs and Public Safety

CHARLESTON, West Virginia -- Cadets of the West Virginia Division of Corrections and Rehabilitation Basic Training Class No. 18 performed Nazi salutes as part of their training dating back to the early weeks of boot camp, state investigators have found.

The probe began after a photo emerged earlier this month of nearly the entire class of correctional officers raising the hand salute, a mirror of the gesture used to pay homage to Nazi Germany leader Adolf Hitler before and during World War II.

Gov. Jim Justice announced Monday that all 34 guards and three academy staff members would be fired, and four instructors suspended without pay, per recommendations from Jeff Sandy, director of the state Department of Military Affairs and Public Safety.

One of the cadets called the salute a sign of respect for their instructor, Karrie Byrd, according to the executive summary of the state investigation. Several class members adopted it, while others recognized its “historical implications” and refused to go along with it.

Byrd told investigators she had no idea of the historical or racial implications of the gesture, and thought it was simply a greeting. Several others disputed Byrd’s statement.

When two other instructors told Byrd and the class of the history tied to the gesture — the report does not say what history was specified, but the Nazis systematically slaughtered more than 6 million Jews and others during the Holocaust — one cadet stood up and spoke in defense of the Nazi salute.

“Look at me I am black and I am doing it,” he said, according to the report.

Eighteen other cadets identified this person as the originator of the salute within the training class. No cadets suggested anyone else started the trend. Fifteen said they could not remember who started it.

Sandy and Brian Abraham, Justice’s top attorney, said the cadet who purportedly sparked the trend did not graduate from the academy, for unrelated reasons, but declined to say why.

A DMAPS spokesman said Monday the department is “awaiting guidance from counsel and leadership” regarding the release of the full report and the names of the cadets.

The full report presumably would contain the names of the class members, other photographs of the class found on social media depicting homages to Hitler and further detail about the class.

When state officials first commented on the photo, they released a version of it with the faces of the people blurred. The state has refused to release an unblurred photo and public records requests for relevant documents, citing privacy concerns.

Investigators determined that the Nazi salute was repeatedly performed with Byrd’s knowledge, and she “encouraged it, reveled in it, and at times reciprocated” it. She also overruled those who tried to stymie the practice.

This all culminated in the graduating class photo the recruits took, which sparked widespread news media attention once unearthed.

According to investigators, Byrd took the photo and directed its subjects. She had to take it several times because 10 cadets reportedly did not make the gesture until she told them to do so. These cadets told investigators they held up a closed fist, in lieu of an open hand, so as to comply but not risk failing out of the class.

After it was taken, the photo was sent to a secretary, who asked Byrd what everyone in the picture was doing.

“That’s why they do that, because I’m a hardass like Hitler,” Byrd said to the secretary who saw the photo, according to the state investigation.

The secretary and two other instructors individually discussed the photo with a Capt. Daniels-Watts (her first name was not given in the report) at the academy, who said, “Well that is going to bite us in the ass.”

Daniels-Watts, by her own admission, found the picture to be horrible, but never addressed Byrd, removed the pictures from packets issued to cadets or reported the situation to her supervisor.

“Do I resign now, or what?” Daniels-Watts told investigators when the meeting for academy staff was called regarding the picture. “I saw the picture and did nothing.”

In an interview after the summary’s release, Sandy said the behavior culminating with the photo was ultimately a case of young people who did not fully understand the implications of the salute, but were not driven by hate.

“The investigation showed there was no white supremacy, no neo-Nazi, just ignorance,” he said. “I guess you can say that’s the silver lining.”

During the course of the investigation, composed of about 75 interviews with Corrections and Rehabilitation employees, investigators found pictures on social media of Byrd, surrounded by class members all holding their fingers above their lip in a caricature of Hitler’s iconic mustache.

The entirety of the executive summary, in contextualizing the photo, does not specifically mention Judaism, the Holocaust, Nazis, Hitler or the white supremacy movement that the salute has become linked with.

Investigators concluded that, while the photograph was “highly offensive and egregious in appearance,” it did not reveal any overt motivation or intent that it was a discriminatory act toward any racial, religious or ethnic group.

Abraham declined to comment on the finding of non-discrimination, given the overt symbol depicted in the photo. However, he noted that the investigations were conducted after substantial news coverage of the incident, and that no one is likely to incriminate themselves in an interview.

“Your question, to me, is to put me in the mindset of their motivation,” Abraham said. “I can’t do that.”

Sandy said Byrd and Daniels-Watts were fired. He didn’t think resignations were appropriate, given the gravity of the situation.

However, Abraham said there is no system built into law or practice that ensures none of the cadets will be hired as law enforcement in the future.

The firings come on the heels of several acts of mass violence toward Jewish people and amid fears of heightened anti-Semitism in America. Over the weekend, five Jews were stabbed when a man entered the home of a New York rabbi and allegedly engaged in a machete rampage.

Earlier this month, six people were killed when two shooters opened fire in a kosher market in New Jersey (the dead include the two shooters, one police officer and three people at the market).

Victor Urecki, the rabbi at Charleston’s B’nai Jacob Synagogue and a regular figure around the Capitol who was briefed on the photo before state officials released it, said he was astonished by the ignorance and lack of moral courage of many of those involved in the situation.

Quoting Primo Levi, a prominent Holocaust survivor, Urecki warned of the consequences of bystanders who fail to speak up in the face of wrongdoing.

“Monsters exist, but they are too few in number to be truly dangerous. More dangerous are the common men, the functionaries ready to believe and act without asking questions,” he said. “It is not just the Department of Corrections and Rehabilitation that is confronting this danger. We, as a country, are seeing it today.”