NYPD: Razor in Cop's Sandwich Was Not Put There on Purpose

The rusty razor that ended up in a cop’s sandwich purchased at a Queens deli was not put there deliberately, the NYPD’s top cop said Saturday. 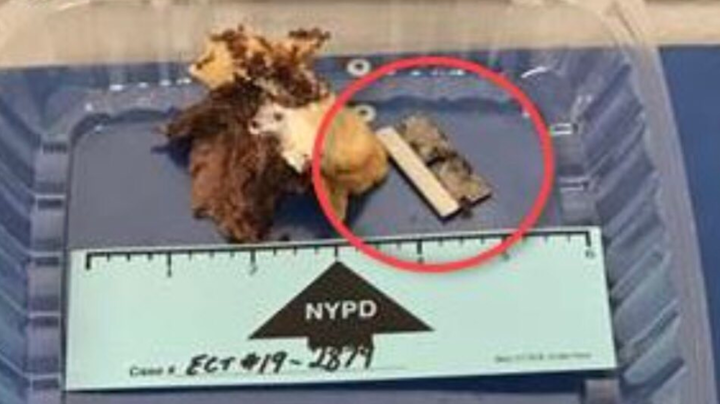 The rusty razor that ended up in a cop’s sandwich purchased at a Queens deli was not put there deliberately, the NYPD’s top cop said Saturday.
New York Police Department

NEW YORK -- The rusty razor that ended up in a cop’s sandwich purchased at a Queens deli was not put there deliberately, the NYPD’s top cop said Saturday.

“After a thorough investigation by @NYPDDetectives its been determined that the razor incident was indeed an accident,” NYPD Commissioner Dermot Shea tweeted. “Thankfully our officer or another customer wasn’t seriously injured.”

Officer Thomas Tergesen was on-duty for the NYPD’s Critical Response Command when he purchased the Philly cheesesteak at Bon Appetit, a sandwich shop on Beach 129th St. in Rockaway Park, about 4:30 p.m. Thursday.

The 24-year NYPD veteran cut the inside of his mouth on the razor as he chomped on the cheesesteak. He was taken to Nassau Community Medical Center for a minor wound.

Sources with knowledge of the case said that the kitchen was under construction and the blade may have accidentally fallen on the grill and ended up in Tergesen’s food.

In a statement released Friday, they called officers from the 100th and 101st Precincts, “an exemplary example of professionalism and service to not only our business but to our local community in the Rockaways, Queens and New York City at large.”

“If given the opportunity, the management of Bon Appetit would like to personally apologize to the officer and the rest of the local law enforcement community," the statement said.

Attempts to reach the owners were unsuccessful Saturday.

Shea said that “appropriate” city agencies had been informed of the results of the police investigation “to ensure this never happens again.”