The FBI said Sunday that it is treating a naval base shooting in which a Saudi airman killed three people as an act of terrorism, while it is questioning Saudi students who were training at the base in Pensacola, Florida. 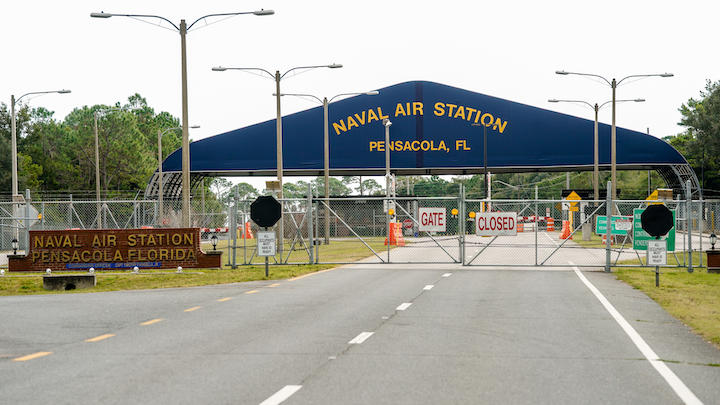 A general view of the atmosphere at the Pensacola Naval Air Station following a shooting on Dec. 6, 2019 in Pensacola, Fla. The second shooting on a U.S. Naval Base in a week has left three dead plus the suspect and seven people wounded.
Josh Brasted/Getty Images/TNS

WASHINGTON -- The FBI said Sunday that it is treating a naval base shooting in which a Saudi airman killed three people as an act of terrorism, while it is questioning Saudi students who were training at the base in Pensacola, Florida.

The shooter was 21-year-old Mohammed Alshamrani, a 2nd Lieutenant in the Royal Saudi Air Force, who was undergoing training at the base, FBI Special Agent Rachel Rojas said Sunday.

Questions continue to swirl around Alshamarani's motivation and whether the gunman - who used a legally purchased handgun to go on a rampage - was acting in concert with others.

"Our main goal is to confirm whether he acted alone or was he part of a larger network," Rojas said at a press conference, adding that no arrests have been made in the case.

The FBI is working "with the presumption that this was an act of terrorism," Rojas said.

Speculation has surrounded a number of Alshamrani's fellow Saudi classmates who allegedly filmed the attack.

"Some, one or two, were filming it," Secretary of Defence Mark Esper said in a interview with Fox News on Sunday. "What's unclear was were they filming before it began or is it something where they picked up their phones and filmed it once they saw it unfolding."

Rojas said that a number of Saudis studying at the naval base were "close to the shooter" and they are currently restricted to the base by their Saudi commanders, who are cooperating with the investigation.

Over 5,000 foreign national are receiving military training in the US, part of a programme with US allies that is now under review by the Pentagon.

Alshamrani opened fire in a classroom with the Model 45 Glock handgun, killing three aviation students and wounding eight others, before being shot dead in a gunfight.

The FBI is "working tirelessly to discern any possible ideology that may have been a factor in this attack," Rojas said.

Rojas declined to comment on reports that Alshamrani hosted a dinner party prior to the attack where attendees watched videos of mass shootings.

The incident underscored the US' sometimes rocky relationship with Saudi Arabia, which is a key US ally in the Middle East, but has been accused of war crimes in Yemen and the murder of journalist Jamal Khashoggi last year.

Much to the consternation of a majority of lawmakers in Congress, the president has maintained tight relations with Saudi Arabia, despite the Khashoggi murder.

In the face of bipartisan condemnations of Saudi Arabia Trump has largely stood by the kingdom, touting their massive purchases of US military goods.

Trump on Saturday said Saudi Arabia's King Salman "will be involved in taking care of families and loved ones."

On Friday Florida Governor Ron DeSantis said Saudi Arabia "needs to make things better for the victims and they're going to owe a debt here."