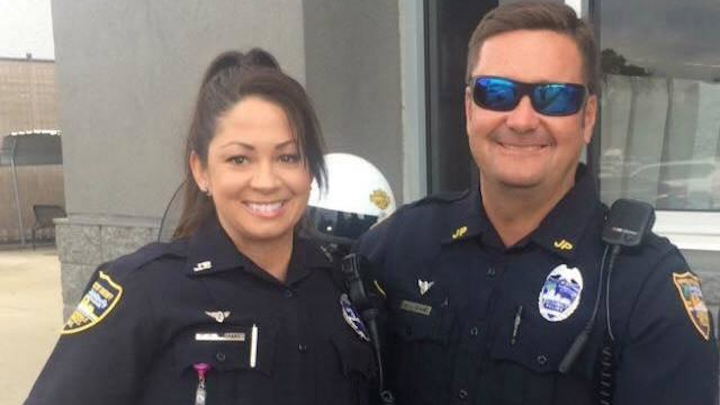 JACKSONVILLE, Florida -- With emotion in his voice, Jacksonville police officer William "Jack" Adams spoke Friday about the death of wife and corrections officer Cathy Adams in a late 2018 crash on Interstate 95 in St. Johns County.

Before Circuit Judge Howard Maltz sentenced Johnston to 15 years for DUI manslaughter, the soon-to-retire officer told the court how he suffered a fractured back in the crash. He said he has struggled since the crash to understand why it occurred, and that he and his family's life will never be the same.

"How do you handle the sorrow and heartbreak this senseless act caused? I have lain awake at nights, but it cannot be done," Adams said. " ... Cathy's gone. My upcoming retirement (Dec. 27) from the Jacksonville Sheriff's Office should have been a new beginning for us. We had so many plans to travel and spend time together."

When Adams finished, Maltz told him, "thank you for your strength today." Johnston was sentenced, also getting a concurrent state maximum of five years in prison for DUI causing serious bodily injury. A restitution hearing is set for Feb. 5, court records show.

Adams and wife Cathy, 43, were returning home about 1:15 a.m. on Dec. 9 from the Mandarin vs. Miami Columbus state championship high school football game when Johnston's car collided with their SUV. The Adams's SUV swerved across multiple lanes and overturned. Cathy Adams died, while her husband was hospitalized in critical condition. His teenage son and daughter suffered minor injuries, the Florida Highway Patrol said. All four were wearing their seat belts, while Johnston, also wearing her seat belt, wasn't injured the Highway Patrol said.