A 28-year-old man with a history of violence has been charged with murder, nearly two weeks after police said he fatally shot a Detroit police officer and critically wounded another with a high-powered rifle in a gunfight at a west-side Detroit house. 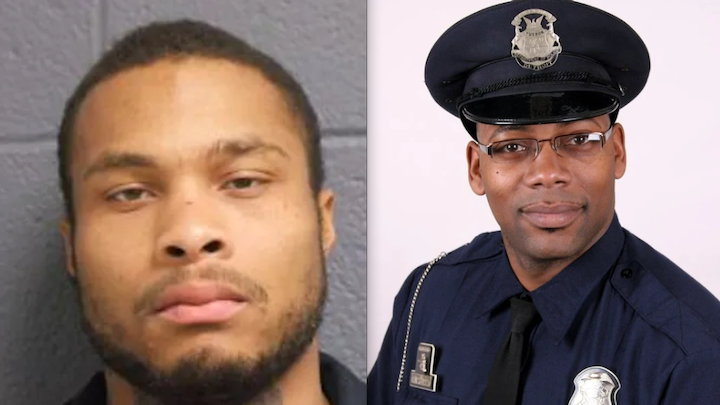 DETROIT -- A 28-year-old man with a history of violence has been charged with murder, nearly two weeks after police said he fatally shot a Detroit police officer and critically wounded another with a high-powered rifle in a gunfight at a west-side Detroit house, Wayne County Prosecutor Kym Worthy announced at a news conference Tuesday.

Under state statute, a first-degree murder conviction is a mandatory life sentence.

"As the allegations surrounding the heartbreaking death of Officer McClain unfold, we continue to do what is necessary to bring his assailant to justice," Worthy said at a news conference at the Frank Murphy Hall of Justice. "There cannot be a rush to judgment. We charge JuJuan Parks with the death of Officer McClain today, but I would like to caution everyone that this investigation is far reaching and is not over. As always, we will be thorough and complete. Only the path of justice, and nothing else, will dictate further action.”

Parks, court records show, was paroled from prison in March and had lived a troubled life.

Police had not named the suspect until now because he was not yet charged.

Detroit Police Chief James Craig had said it appeared that Parks had a death wish and was likely lying in wait for the officers at a two-story house on the 20000-block of Wyoming and was hoping to go out in a hail of bullets, in what law enforcement suggested was an attempt to provoke a lethal response by police.

Parks, Craig added, was armed with an assault-style weapon with an extended magazine.

Since the Nov. 20 incident, family, friends and other officers have mourned McClain, memorializing him at a Nov. 25 vigil with prayers, lighted candles, and a balloon release outside of the 12th Precinct on 7 Mile held in honor.

In addition, the incident also has sparked an investigation of a Detroit Police Sgt. Ronald Kidd, who was suspended for not rushing to the scene and accused of behaving cowardly fiver years ago when he stood by and watched a female officer take a beating.

Court records show Parks received a closed-head injury as a teen from a 2009 car accident, his brother worried about his mental health, and he has been accused of assaulting women, smashing a windshield with a brick, breaking and entering and gun violence.

Authorities said his most recent incident lead to the death of a police officer.

At about 7:20 p.m., Nov. 20., two officers — McClain and Batoum-Bisse — responded to a report of a home break-in at Wyoming and Pembroke avenues. Eight minutes later, the officers arrived as the frantic occupants of the house stood outside, telling them someone was inside and armed.

Craig, who that he had a chance to review video recordings from the officer's police body camera, said when McClain arrived at the westside house, he was in charge and understood he was facing a "very dangerous situation" and did not hesitate to seek backup.

Two more officers arrived. All four entered the home, looking for the man, who reportedly had turned off all the lights, except for the lights in the basement.

The officers cleared the upper levels of the home and were heading down the basement stairs when the suspect jumped in front of the stairs and fired two shots: One hit McClain in the neck, the other hit Batoum-Bisse in his left ankle.

Police said they believe Parks had gone to the house about two weeks earlier, spraying it with bullets, and returned that night with a vengeance.

Court records show Parks has had several convictions, including assault and weapons-related crimes. In 2009, he pleaded guilty to attempting to break into a building. A year later, two women sought protection orders.

In 2011, a Wayne County jury convicted Parks of assault and weapons possession.

In that incident, court records show, an angry Parks demanded car keys from a woman and pressed a gun to her head. He questioned her, and her friend, about where they had been and accused them of hanging out with another man.

In a struggle, Parks shot the woman in the shoulder.

Public viewings are set for McClain from 3 to 8 p.m. Wednesday and Thursday at Fisher Funeral Home and Cremation in Redford Township, followed by an 11 a.m. funeral Friday at Greater Grace Temple in Detroit.