Cedron Doles was a controversial rapper with reputed ties to a Black P Stone gang faction called Black Mobb who earned a following in Chicago’s drill music scene by taunting gang rivals, some of them slain, with his lyrics. 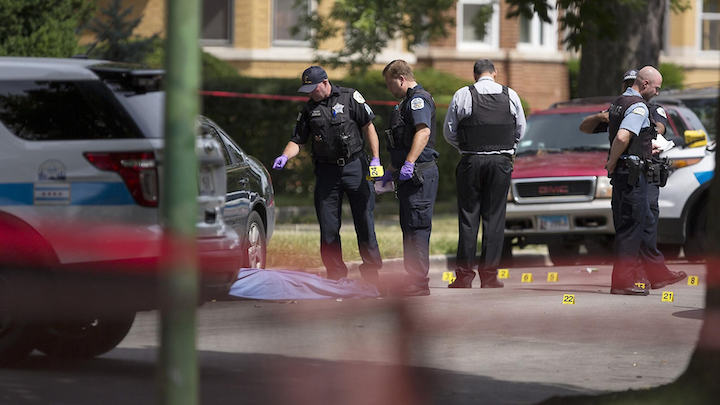 Chicago police investigate the shooting death of Cedron Doles in the 8100 block of South Paulina Street on July 10, 2017, in the Auburn Gresham neighborhood.
Alyssa Pointer/Chicago Tribune/TNS

CHICAGO — Cedron Doles was a controversial rapper with reputed ties to a Black P Stone gang faction called Black Mobb who earned a following in Chicago’s drill music scene by taunting gang rivals, some of them slain, with his lyrics.

“Whoever dead or alive, f— the opps, b——!” Doles, who performed under the name Shootashellz, rapped in a music video posted to YouTube in April 2017 .

Entitled “Death of 150,” the video talked of the Black Mobb’s longstanding feud with the rival Stone faction No Limit, also known as No Limit 150.

About three months later, Doles, 21, was about to get into his car in Chicago’s Auburn Gresham community when three men exited a white Nissan Altima and opened fire on that July morning. Shot multiple times about the head and body, he collapsed mortally wounded in the street.

Doles’ violent death drew little attention except from a few rap music websites, just one of 13 people shot in Chicago on that day in July 2017, one other fatally. His brazen slaying, though, appears to be typical of the gang violence plaguing Chicago — much of it retaliatory in nature, sometimes the result of petty disputes fueled over social media between rivals from even the same gangs but different factions, authorities say.

Records recently unsealed in federal court show that two months before Doles’ slaying, the FBI had joined forces with Chicago police to investigate the yearslong, back-and-forth violence between Black Mobb and No Limit.

The filing sought court permission about a year after Doles’ killing to search the contents of an iPhone 7 Plus recovered from his pants pocket.

In the year and a half since, no charges have been brought in connection with Doles’ slaying. The investigation remains ongoing, police said.

Meanwhile, federal authorities have brought separate indictments since last year against members of the Milwaukee Kings gang and the Goonie Boss faction of the Gangster Disciples for more than a dozen killings combined.

According to the court record unsealed last month, witnesses reported seeing Doles leave a residence in the 8100 block of South Paulina Street with another individual about 9:30 a.m. on July 10, 2017.

As Doles was about to enter his car down the block toward 82nd Street, the three assailants approached — it was unclear from the filing if they happened by in the Altima or were lying in wait — and fired off 43 shots.

The three sped off at a high rate of speed southbound on Paulina, the FBI said.

For several months leading up to his death, Doles could be heard online in the “Death of 150” music video holding what the FBI said appeared to be a handgun.

In the court filing, the FBI said Doles and others directed “numerous menacing threats” in the song toward No Limit, including three slain members of the gang.

The FBI believes the song referred to:

— Jamal Harris, 19, who was killed in a shooting in February 2012 outside a liquor store in the South Shore community that also left another man dead and five teenage boys wounded.

— Jacobi Herring, 21, was fatally shot in August 2013 at East 79th Street and South Yates Boulevard, an area known to residents as “Terror Town” because of its incessant gun violence and gang activity. The Tribune had featured Herring in a story earlier that same year about a Police Department strategy to try to intervene with mostly gang members identified through a computerized formula as most prone to gun violence. He was on that list at the time of his killing.

Less than a month before Doles was fatally shot, he told a hip-hop video blogger about the violence in his South Side neighborhood and how retaliatory shootings won’t stop until enemies make a effort to put their differences aside.