Two Dallas County sheriff’s deputies were arrested Thursday after they were accused of stealing from a Home Depot store destroyed by a tornado last month. 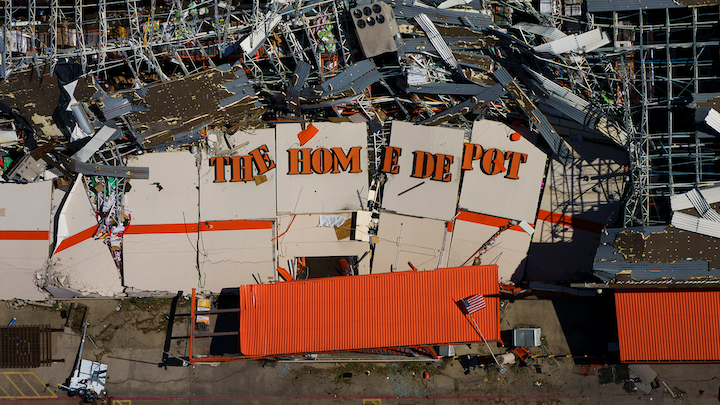 DALLAS — Two Dallas County sheriff’s deputies were arrested Thursday after they were accused of stealing from a Home Depot store destroyed by a tornado last month.

Joseph Bobadilla, 25, and Rebecca Evans, 41, were charged with theft of property between $750 and $2,500. As a public servants, they face an enhanced theft charge, a state jail felony, authorities said.

Home Depot’s corporate office notified the sheriff’s office that Bobadilla had stolen from the store on Forest Lane, which was leveled when several tornadoes tore through the Dallas area Oct. 20.

The sheriff’s office said Bobadilla had been working off-duty guarding the Home Depot store after it was destroyed.

“During his shifts, Bobadilla would take items from the store and later exchange them at another location for in-store credit, subsequently purchasing items with the in-store credits he received,” the sheriff’s office said in a news release. Details on Evans’ arrest weren’t immediately available.

Sheriff Marian Brown said in a written statement that the office doesn’t support employees who break the law.

"Our core values are integrity, professionalism and accountability and as a result, we will follow the proper procedures and guidelines in place to uphold the law and ensure the deputy is held responsible for his actions,” she said.

A spokesman for the sheriff’s office said Bobadilla had been hired as a detention service officer in 2014, then was promoted in 2016 and assigned to traffic enforcement.

Evans has worked for the sheriff’s office for 16 years. She was promoted to a deputy in 2007 after working as a detention service officer in the jail, officials said.