A judge has found a Clark County man guilty of attempted murder after shooting an Indiana State Trooper at a traffic stop in December 2017.

Aprile Rickert
The Evening News and The Tribune, Jeffersonville, Ind. 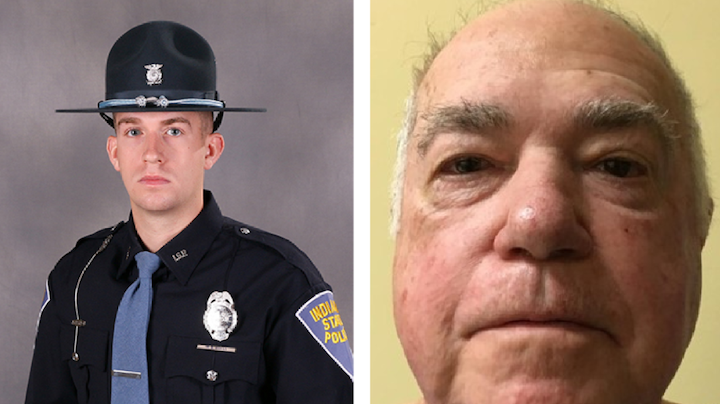 JEFFERSONVILLE, Indiana — A judge has found a Clark County man guilty of attempted murder after shooting an Indiana State Trooper at a traffic stop in December 2017.

After roughly two hours of deliberation Wednesday, Senior Judge Steven Fleece reached his verdict in the bench trial of 81-year-old Oscar Kays, charged with shooting Trooper Morgenn Evans when he pulled him over for erratic driving Dec. 12, 2017 in downtown Jeffersonville.

For the level 1 felony attempted murder, Fleece found Kays guilty but mentally ill, a stipulation which ensures that he's properly treated for medical and mental health issues while incarcerated.

Clinical psychologist Wayne Herner testified Wednesday that he had diagnosed Kays with Behavioral Fractal Temporal Dementia during his time in jail; he was released in May on strict home incarceration after serving 17 months. Herner said that people with this illness "have no filter so they can be very aggressive, verbally or physically," adding that "any change in routine is unsettling."

Kays also has medical issues such as diabetes, heart issues, high blood pressure and prostate cancer. He will remain on home incarceration pretrial.

The judge also found Kays guilty of a level 6 felony for resisting arrest, when he fled the scene and went home after the trooper fired 11 shots back at him.

He was acquitted of a level 3 felony for aggravated battery. If he had been convicted of all three, Kays could not have been sentenced for both the attempted murder and aggravated battery charge under Double Jeopardy rules.

"There were a number of unique aspects in this case," Fleece said in court after he returned the verdicts. "This was a close case."

Defense attorney Brian Butler said he and attorney Patrick Renn are satisfied with the judge's findings, specifically that Kays was allowed to walk out of court Wednesday.

"Oscar is 80 years old, he's got very serious documented mental and physical health conditions," Butler said after the trial concluded. "We are just very very pleased that the judge allowed him to remain out."

He also said the mentally ill finding in the conviction could give the defense more options in sentencing. Though the attempted murder charge carries a minimum of 20 years, Butler said he hopes the judge will see fit to let this be served on strict home incarceration.

Butler said he was glad the court recognized that at the time of the shooting, Kays was a 79-year-old man with no legal troubles, who was married with a loving family, who had lived and worked in the community for decades.

"I think that is important because it differentiates why this happened," Butler said. "He's not just an evil man who had some desire to murder a state trooper. He was a man who had lived a very good life and tragically things have deteriorated for him mentally."

Clark County Prosecutor Jeremy Mull said he was glad the judge convicted Kays of attempted murder because that's what it was.

"There was no doubt in my mind that when you shoot a police officer who is trying to detain you, that constitutes the crime of attempted murder in this case," Mull said.

"You have to hold that line...otherwise I feel like it's going to embolden the criminal elements in the community to be violent towards police officers. The law supports that certainly the facts supported that in this case and it's the right thing to do."

Around a dozen witnesses were called over the course of the day and-a-half trial, including Trooper Evans, who took the stand Tuesday.

Court records show Evans stopped Kays around 7 p.m. after he saw him swerving and performed field sobriety tests, some of which the then-79-year-old could not perform. He had drank about three beers before heading home from the Eagles Club in Jeffersonville when he was stopped.

Evans testified Tuesday that he sensed Kays could get combative when the suspect had said "I'm not going back to jail," so the Trooper attempted to pin him with an armbar hold; he struck the man's arm with a flashlight multiple times but did not secure him. During the stop, Kays pulled a small gun from his pocket and shot Evans once in the head, despite previously telling the officer twice that he had no weapons.

Evans returned fire, discharging 11 shots — one of which hit Kays through his truck windshield — before the suspect left and drove the two miles to his home on Huston Drive where he was later arrested.

Both were treated for the non life threatening wounds; Evans said he retains bullet fragments in his head and has serious headaches and nausea at times.

Aprile Rickert is the crime and courts reporter at the News and Tribune. Contact her via email at aprile.rickert@newsandtribune.com or by phone at 812-206-2115. Follow her on Twitter: @Aperoll27.

©2019 The Evening News and The Tribune (Jeffersonville, Ind.)

Visit The Evening News and The Tribune (Jeffersonville, Ind.) at newsandtribune.com