By Jessica Anderson and Tim Prudente
The Baltimore Sun 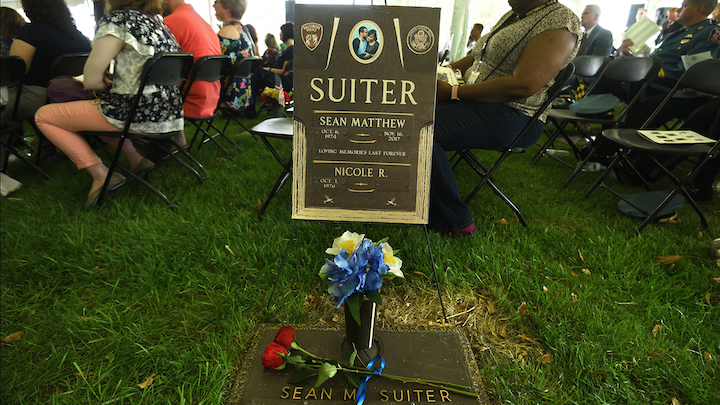 The 33rd annual Fallen Heroes Day ceremony took place at Dulaney Valley Memorial Gardens on May 4, 2018 in Timonium, Md. Baltimore City Detective Sean Suiter was one of the people being honored. A Maryland State Police investigation into Suiter's death found it was a suicide, the city's police commissioner said.
Algerina Perna/Baltimore Sun/TNS

The developments came a day after Police Commissioner Michael Harrison closed the case as a suicide after receiving a Maryland State Police report. He said the agency’s review backed an earlier external investigation that found Suiter committed suicide, “nor was there any suggestion that the case should be re-investigated or continued.”

The state Medical Examiner’s Office initially ruled the death a homicide and has not changed the finding. But as various agencies differ on the manner of death, potential payments to the Suiter family have been on hold. A suicide finding could mean the loss of more than half a million dollars in benefits, workers’ compensation and pension payouts.

Mosby declined to talk about the apparent discrepancy.

“I can’t comment on open and pending matters,” Mosby told reporters outside a downtown courthouse.

“An investigation by your office?” she was asked.

Fraternal Order of Police Lodge 3 President Sgt. Mike Mancuso, who is also a detective, contradicted Harrison in a statement to The Baltimore Sun. He said that police department detectives still are investigating.

“The Suiter case is very much an open and active case being investigated by BPD Homicide,” Mancuso said. “BPD Homicide Detectives are some of the best in the country and will investigate all cases until all leads are exhausted.”

According to a statement from police spokesman Matt Jablow, “The State’s Attorney and Commissioner Harrison have agreed that there are a small number of tasks to complete in this case. The Commissioner respects the process and, as a result, BPD is proceeding with those tasks.”

The police department has not publicly released the Maryland State Police report.

Suiter was shot in the head and killed in November 2017 in a vacant lot in West Baltimore while investigating a homicide.

The investigation prompted police to cordon off the Harlem Park neighborhood for days as the agency searched for the gunman. It was later revealed that Suiter was shot one day before he was to appear before a federal grand jury investigating the Gun Trace Task Force corruption scandal.

It’s unclear whether the medical examiner’s office will change the manner of death from homicide.

The family would lose benefits, workers’ compensation and pension payouts if that determination changes.

Bruce Goldfarb, a spokesman for the state medical examiner’s office, said Thursday he could not comment on any potential changes to the finding because of the investigation out of the state’s attorney’s office.

“We don’t discuss cases that are under investigation,” he said.

Last year, the Sun reported Mosby’s office asked the medical examiner not to make any changes to the ruling on the cause of death in the case, citing lingering questions about DNA evidence.

A previous review of the Suiter investigation by the Independent Review Board — a group of law enforcement experts hired by the city to review the case — concluded Suiter’s death was a suicide.

Gary Childs, a retired homicide detective who served on the board, told the Sun last year there were no open questions about DNA evidence. The panel’s 2018 report said “no traceable DNA was recovered from the weapon other than Suiter’s.”

Suiter’s wife, Nicole, said her family wanted investigators to talk to her and learn her husband’s state of mind. She was circled by friends and family members, including the couple’s children, who wore shirts that read “#JusticeForSeanSuiter.”

At Wednesday’s news conference with the Suiter family, he said the detective was not a suspect in the federal Gun Trace Task Force probe and did not commit suicide.

“We weren’t worried about him being prosecuted,” Eldridge said.

Rather, he said, Suiter was worried about blowback from colleagues and how other officers looked at him.

It’s unclear what the recent developments mean for whether the family would receive any benefits that it might be entitled to receive.

“If the death certificate changes from homicide to suicide, that is going to have a big impact on everything,” said attorney Paul Siegrist, hired by the Suiter family.

“We want to act. We’ve been sitting around waiting, over a year,” since the independent review board’s investigation concluded, Siegrist said in an interview Thursday. Initially, he said Suiter family attorneys thought the review board’s determination might prompt a change in the death certificate. But Siegrist said ultimately the board didn’t have the authority other than to give an opinion.

But, he said, the state police findings could be different.

Eldridge said the family still plans to pursue the workers’ compensations funds: “In all fairness, nothing should change.”

Charles Schultz, an attorney representing Suiter’s family before the state workers’ compensation commission, said a hearing was scheduled for Oct. 30, but it was postponed by the commission. A new date hasn’t been set, he said.

Schultz said Suiter’s wife is entitled to a certain amount, based on Suiter’s salary and other factors.

“They’ve been told from day one this was an on-duty death,” and are entitled to the money, Schultz said.