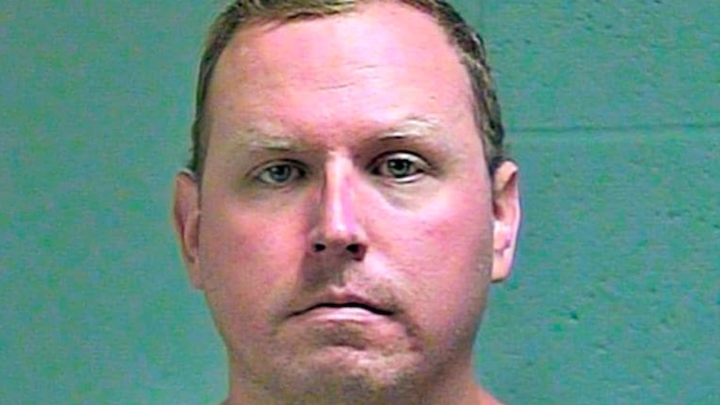 OKLAHOMA CITY -- A jury convicted an Oklahoma City police officer Monday of a crime for killing an unarmed suicidal man.

Jurors also were given the option of finding the officer guilty of first-degree manslaughter or not guilty of either crime.

In his closing argument, Oklahoma County District Attorney David Prater told jurors Sweeney did not follow the law when he "killed a man who called for help."

"He rushed in and created the jeopardy," Prater said.

Sweeney fatally shot Dustin Pigeon, 29, about 2:30 a.m. Nov. 15, 2017, after the victim called 911 threatening suicide. Officers Troy Nitzky and Erik Howell were the first to respond to the courtyard of a housing complex in southwest Oklahoma City.

Both were wearing body cameras.Nitzky was pointing a less-lethal bean-bag shotgun at Pigeon, who was holding a can of lighter fluid and a disposable lighter and threatening to set himself on fire. Howell never removed his weapon from its holster. They approached Pigeon, who was intoxicated, and attempted to de-escalate the situation, asking him to put down the lighter fluid and lighter.A few seconds later, Sweeney, who was not wearing a body camera, approached Pigeon with his gun drawn, yelling, "Drop it!"

The video played for jurors shows the flashlight attached to Sweeney's handgun shining on Pigeon. Sweeney then shouts, "I will (expletive) shoot you! Get on the ground!"

Pigeon lowers his hands to waist level and Nitzky fires one round from his bean-bag shotgun, striking Pigeon in the left hip.

About the same time, Sweeney fires five shots with his 9 mm handgun, striking Pigeon three times, including once in the heart.

Sweeney then asked, "Is that a knife in his hand?"

Sweeney then tells Nitzky, "I didn't know you had a bean bag."

Nitzky and Howell previously testified that Pigeon didn't pose a threat. Two training officers told jurors Sweeney forced the issue after the other officers had already engaged Pigeon.Defense attorney Gary James argued Sweeney didn't know whether Pigeon had a weapon and was unaware Nitzky was aiming a bean-bag shotgun at the victim because the other two officers didn't share the information.

Sweeney told investigators he thought Pigeon was holding a knife. James said his client made the proper decision based on the information he was given.

"Sgt. Sweeney reacted the way he was supposed to react," James told jurors in his closing argument.