A 15-year-old boy accused of attempted murder after a Halloween shooting left a young trick-or-treater in critical condition appeared in juvenile court Saturday morning and was ordered held in detention. 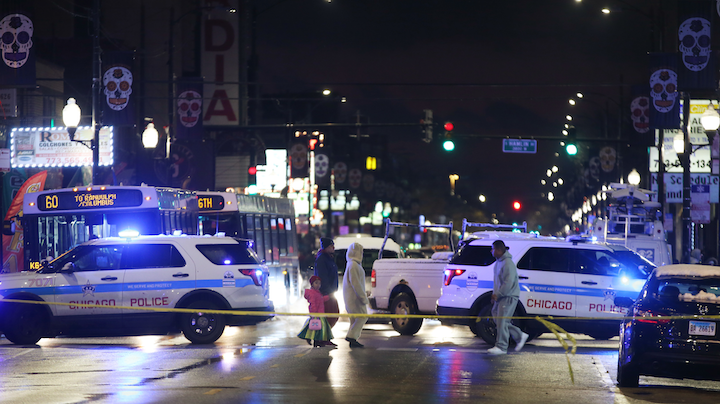 Trick-or-treaters walk past a crime scene in the 3700 block of West 26th Street, where a seven-year-old girl was shot while trick-or-treating Thursday, Oct. 31, 2019, in Chicago. The girl was taken to Stroger Hospital in critical condition.
John J. Kim/Chicago Tribune/TNS

CHICAGO — A 15-year-old boy accused of attempted murder after a Halloween shooting left a young trick-or-treater in critical condition appeared in juvenile court Saturday morning and was ordered held in detention.

Judge Joanne Rosado ordered the boy be held at least until a second hearing Monday.

The boy spoke quietly during the hearing, mostly answering the judge with yes and no. As Rosado read the charges against him, he interjected saying: “I have a question,” but the judge would not allow him to elaborate. “You have rights,” Rosado told him.

He wore a long-sleeved brown jail top, dark pants and white gym shoes, and had short, black hair. He held his hands behind his back for most of the time and twisted around to look at his mother, who nodded several times at him as he was brought back into custody.

“He transformed (the street) into a real-life horror movie,” Assistant State’s Attorney Jack Ruggiero said during the hearing.

Ruggiero said police recovered the gun that was used in the shooting, and ballistics tests showed it was the gun used in the attack, which also left a 32-year-old man, who police said was the intended target, wounded.

Witnesses heard the boy say he tossed the gun in an alley near garbage cans and a school as he ran away, Ruggiero said, adding that video surveillance captured him hiding the gun there.

Ruggiero told the judge that the boy and several others — at least one of whom was wearing a mask — went out that day “looking for trouble,” and looking for a Latin King gang member.

When they spotted the 32-year-old man on the other side of the street from the girl, one of them at first tried to shake his hand. They told him they were Gangster Two-Six members and then chased him, yelling: “Two-Six!” and “King killa!” before the boy fired seven times, hitting him and the girl.

After the shooting, the group listened to a police scanner and learned a little girl was shot. The boy “urinated on his hands” after learning about the girl, and he said he did that to get the gunpowder off his hands, Ruggiero said. The boy also told members of the group to “hide the jacket” that he was wearing.

“He showed complete disregard for human life,” when he fired a gun seven times, Ruggiero said, adding there were “cars driving,” and many children and parents trick-or-treating along the street at the time. “This minor didn’t care about the 7-year-old girl,” Ruggiero said. He “involved himself” in a gang conflict.

John Miraglia, the boy’s defense attorney, said in court that the boy “absolutely” denies the charges. The attorney said the boy has no “publishable” criminal background and said his parents are “good people.”

“I would suggest perhaps the evidence is not as strong as it sounds,” he told the judge. As he left the courthouse, Miraglia said, “It’s a horrible situation for everyone.”

The boy’s mother and his stepfather appeared in court, but they declined to comment. After the judge learned the boy had not been in contact with his biological father, she asked where he was, and his mother said he was in Mexico.

About 5:30 p.m. Thursday, the boy was with a group of other males on the south side of West 26th Street when he aimed his gunfire at the 32-year-old man, wounding his hand, police said.

But he also struck a 7-year-old girl in the lower neck and chest, police said.

She was taken to Stroger Hospital in critical condition but has since stabilized.

The teen suspect was arrested about 1:30 a.m. Friday on West Ogden Avenue in the Lawndale neighborhood, police said.

Police believe the gunman is a member of the Gangster Two-Six gang and was targeting a Latin King when he shot the girl two times as she walked down the street with her father close to the border dividing rival street gangs.