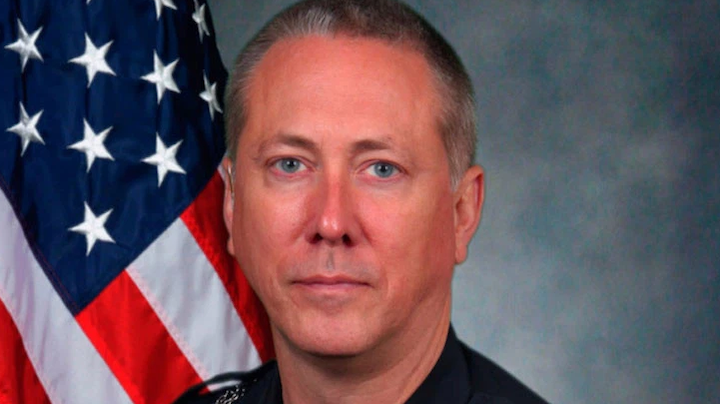 DeKALB COUNTY, Georgia -- It was an ending that seemed to leave almost no one satisfied.

The case was being watched for what it would say about police use of force and accountability.

Kathy Olsen fell to the ground, inconsolable, once her husband was escorted out of the courtroom for transport to the DeKalb County jail.

Chip Olsen will be eligible for parole. He’ll be 69 years old if he serves his full sentence, and might make it out in time to see his 10-year-old son graduate from college.

The relatives of Anthony Hill, the 26-year-old Air Force veteran shot and and killed by Olsen, were also disappointed. They had asked Dear Jackson to impose the maximum sentence — 30 years in prison — but “some time is better than no time,” said Hill’s mother, Carolyn Baylor Giummo.

The state, which had recommended Olsen serve 25 years in prison, with an additional five years probation, also tried to make the best of the sentence.

“We’re disappointed,” lead prosecutor Pete Johnson said. “But we believe the guilty verdict and the fact we got as far as we did was great.”

Johnson spoke of how hard it is to obtain convictions nationwide against police officers. For that, he said, “some measure of solace for the family is a good thing.”

But Johnson had sought so much more.

Last month, Olsen, 57, was acquitted on two felony murder charges, for which he would have been sentenced to a mandatory life term. He was convicted of aggravated assault, making a false statement, and two counts of violating his oath of office.

He shot and killed Hill on March 9, 2015. Hill was off his meds and wandering the apartment complex naked when he encountered Olsen and ran toward the officer. Olsen fired after Hill ignored his commands to stop.

Lead defense attorney Don Samuel, who had recommended five years in prison for his client, said he was pleased with the outcome, “given the extreme recommendation by the prosecution.”

“I think they lacked tact, in my opinion,” Samuel said.

Arguing for a lighter sentence, Samuel described the incident as “a brief moment in time with catastrophic consequences.”

Olsen, he continued, “does not need to be caged to protect the community.”

Dear Jackson had likely already made up her mind by then. Besides Olsen, no one had more at stake in Friday’s sentencing hearing than the first-year Superior Court judge. She inherited the high-profile trial after three more experienced judges recused themselves.

“Right now, you are the conscience of the community,” Johnson told Dear Jackson.

Minutes later, the judge offered words of encouragement to both the victim’s family and the defendant.

“To the Hill family, I see you,” she said. “I watched you throughout this trial. The fortitude you’ve shown, the strength that you’ve shown and, Mrs. Giummo, the compassion you’ve shown for the Olsen family.”

She told Olsen she had been observing him, too, and had come to agree with his sister’s characterization of him as an egg, hard on the outside, soft inside.

“Many viewed you as stoic and void of emotion,” Dear Jackson said. “From the time the opening statement started, I saw the tears.”

Olsen fought his emotions throughout Friday’s hearing, determined to maintain composure. His lips quivered when confronted by Anthony Hill Sr., the victim’s father, who spoke in heartbreaking detail about what he wanted most from the former cop.

“Just once I want that man to make eye contact with me,” Hill Sr. said. “He doesn’t have to say anything. But just your eyes can tell whether or not it’s, I’m sorry. Nothing. I stood out in that passageway many a day just hoping just once that I could get just a little bit of eye contact. You don’t have to say anything to me. Not one time would he look my way. Not just a glance. Anything, anything.”

Baylor Giummo said she had signed off on a plea deal offered to Olsen before the trial. If he had accepted, he would have spent 15 years in prison.

But Olsen’s lack of contrition, she said, led her to ask for a much stiffer penalty.

But Olsen’s lawyers said Friday he wanted to apologize to Hill’s family, face to face. Samuel said he approached DeKalb District Attorney Sherry Boston before the trial seeking to arrange a meeting but Boston said no.

Olsen was supposed to give a statement before the court but didn’t, for reasons unclear.

“I know Mr. Olsen didn’t wake up that day and say, ‘I’m going to shoot Anthony Hill,’” Baylor Giummo said. “But his decision to use lethal force is why I do not have my son. My only son. … Because he chose to use deadly force that’s the reason we’re here.”

She explained to Olsen why her son ran toward him.

She said her father always told them “at a young age, ‘If you’re ever in trouble, run to the police,’” she said. “We don’t run to trouble. We run for help.”