The jury of four men and eight women deliberated eight hours over two days before finding Christopher Berak guilty of first-degree, premeditated murder and homicide of a peace officer in the death of Oakland County Sheriff's Deputy Eric Overall. 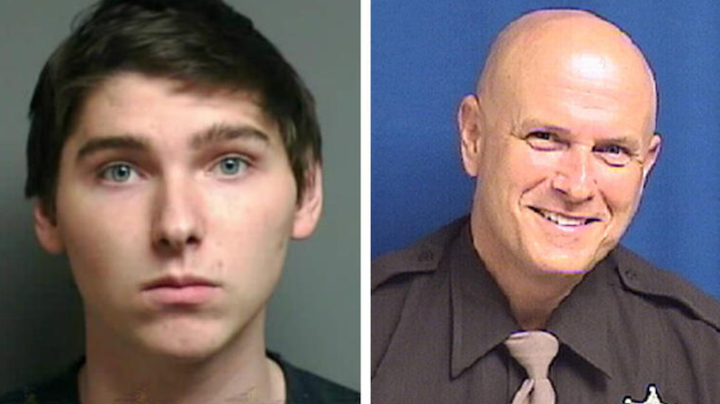 The jury of four men and eight women deliberated eight hours over two days before finding Christopher Berak, 24, guilty of first-degree, premeditated murder and homicide of a peace officer in the death of Deputy Eric Overall, 50, a 22-year veteran.

Berak stood impassively, staring straight ahead, as jurors were individually polled by Judge Leo Bowman. Bowman set a Dec. 10 sentencing date on the charges, which carry life in prison without parole. Several relatives and friends of Overall hugged each other, some weeping.

During deliberations Thursday, the jury asked to review evidence, including patrol car videos that showed Overall being struck by Berak’s Saturn as the deputy was attempting to put stop sticks along M-15 near Seymour Lake Road to disable Berak’s car on Nov. 23, 2017.

“It’s been a difficult two years,” said Overall’s widow, Sonja Overall, outside the courtroom as she wiped away tears. “I always knew in my heart the jury would be just. I’m truly grateful at their decision. Now we can try to get back to normal.”

Overall’s son, Kenneth, echoed her sentiments, adding: “The jury made the right decision.”

Berak’s parents, who sat through the trial, left the court immediately after the decision. Berak’s attorney, Stephen Rabaut, declined comment other than there would likely be an appeal.

Rabaut had previously described Berak as a “troubled young man” but said the Overall’s death, run over along the shoulder of M-15 near Seymour Lake Road in Brandon Township, was “strictly accidental” and a “reflex action” rather than anything planned or intentional.

Rabaut noted at all times, Berak was followed by deputies he drove the speed limit and remained in his own driving lane.

Berak, who reportedly has a history of mental problems, had been previously examined by psychiatrists and found to be mentally competent to stand trial.

Jurors apparently heard enough over the week-long trial to come to their conclusion. Bowman had advised them they could also consider the lesser offenses of second-degree murder and involuntary manslaughter. That apparently never became an issue.

In closing arguments Wednesday, assistant prosecutor Ken Frazee urged jurors to consider Berak’s “words, actions and deeds” they had heard during the week-long trial, which featured 33 witnesses and 120 exhibits regarding the incident that led to Overall's Nov. 23, 2017, death.

Frazee said Berak was “angry at law enforcement” that night after two earlier police stops, being the subject of a pursuit and receiving a speeding ticket — all in less than three hours. Frazee reminded jurors of Berak’s cell phone recordings, statements to police and texts to friends that demonstrated his intentions.

At various times, Berak boasted in recordings how he was “God” and “Satan” and  “the creator.” He cursed at police and vowed to kill “anyone who tried to touch him." At one point during the drive, he texted a friend “Don’t forget about me bro” and “this is the last straw.”

In one phone recording, Berak could be heard saying apparently to no one specifically: “If you touch me, I will kill you. … Do you understand?”

“He went out looking for someone in law enforcement,” Frazee told jurors, retracing Berak’s drive from his Macomb County pizza delivery job, to his home 45 miles into Lapeer County and a 22-mile police pursuit that ended tragically in Oakland County.

“This was all a conscious choice, and he was in control the whole time,” Frazee told the jury. “Well, you are in control now, and I’m asking you to find him guilty as charged.”