The Palm Beach County sheriff's deputy who reportedly threatened three people at gunpoint this month while he was intoxicated in downtown West Palm Beach cannot legally buy or own guns for the next year. 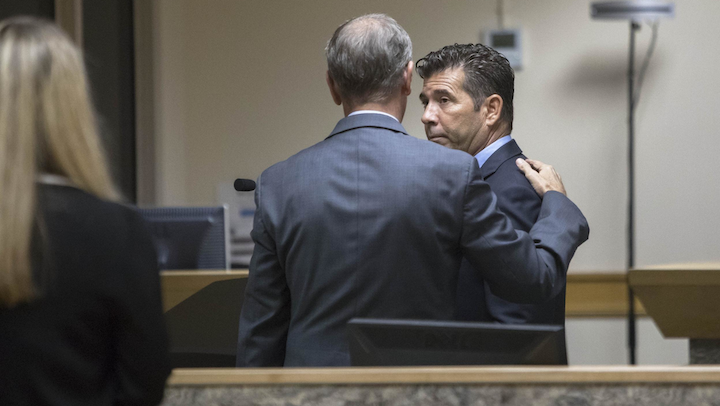 PBSO deputy Jerald Alderman, right, talks with his attorney after a hearing in a Gun Club courtroom in West Palm Beach, Florida on October 29, 2019. Alderman was charged with three counts of aggravated assault with a firearm and a charge of using a firearm while under the influence of alcohol.
GREG LOVETT/PALM BEACH POST/TNS

WEST PALM BEACH, Florida — The Palm Beach County sheriff's deputy who reportedly threatened three people at gunpoint this month while he was intoxicated in downtown West Palm Beach cannot legally buy or own guns for the next year.

At a risk-protection order hearing Tuesday afternoon, Jerald Samuel Alderman's attorney, Scott Richardson, told Circuit Judge Ted Booras that Alderman agreed to the city's request that he neither buy nor own guns for the next year.

Richardson stressed that the agreement was not an admission to the criminal allegations against Alderman and said that he may ask for the order's length to be shortened, pending the results of the criminal case.

For now, the order is in effect until Oct. 29, 2020, just over one year from the 54-year-old sheriff's deputy's arrest on three counts of aggravated assault and one count of using a firearm while intoxicated. Alderman, who appeared in court Tuesday, has been out of the Palm Beach County Jail under supervision on a $40,000 surety bond since Oct. 18, the day after his arrest, records show.

A risk-protection order, often called a "red-flag law," is one component of the Marjory Stoneman Douglas Public Safety Act's efforts to restrict access to guns. The act, passed three weeks after the Feb. 14, 2018, mass shooting at the Parkland high school, also includes bans on bump stocks, a raise in the minimum age to buy a gun and a three-day waiting period on all gun purchases.

More than 70 petitions for temporary gun bans have been filed in the county since the bill went into effect last year, county court records show.

In most cases, the individual whom the order is filed against does not face criminal charges.

As a judge noted in initially denying the city's emergency petition to ban Alderman from having access to guns, the conditions of Alderman's release from jail already barred him from having either guns or ammunition.

The next day another deputy agreed to store Alderman's department-issued ammunition until a court or the sheriff's office ordered Alderman to surrender it or agrees to allow him to have it, court records show.

The risk-protection order also will ensure that Alderman cannot legally buy any more weapons by alerting gun sellers to the order in place against him.

The city is safer thanks to the order, said attorney David Goudreau, who represents the three men whom Alderman reportedly threatened at gunpoint early Oct. 12.

His clients were prepared to testify in the event that Alderman did not agree to the order.

"They're very scared still," Goudreau said, "but at the same time they feel that the judicial system should treat this man like anyone else who is not a sworn law-enforcement officer."

Video from that early morning confrontation was posted to Facebook and has been viewed thousands of times. On it, Alderman is seen showing a badge and pulling out a gun as he tells the three people inside the car, "If I see you downtown again tonight, guess what's gonna happen?"

When the driver asked what would happen, Alderman, who appeared to be intoxicated, yelled at them and banged a gun on the car three times.

The three men told city police that they were terrified. He had approached their car in a parking lot on Banyan Boulevard and accused them of hitting his Porsche.

Alderman later told authorities he stopped the men because people had been breaking into cars. Police noted they had no reports of car break-ins in that area.

In the city's request for the risk-protection order, officers mentioned another instance in which they came across an apparently drunk Alderman, two weeks before the confrontation that led to his arrest.

In that instance, a seemingly intoxicated Alderman identified himself to city police as a law-enforcement officer when he approached officers handling a parking issue on Clematis Street. They noted that he smelled of alcohol and was acting as if he was under the influence.

City police argued in their petition that the two incidents indicate that Alderman "displays a pattern of alcoholism."

Richardson and Alderman declined to speak with reporters after the hearing.