An Aurora police deputy chief confirmed Friday that officers did not announce themselves as police in the moments before they shot an armed man through front window of his home, but that Andrew Huff knew they were cops when he grabbed a gun. 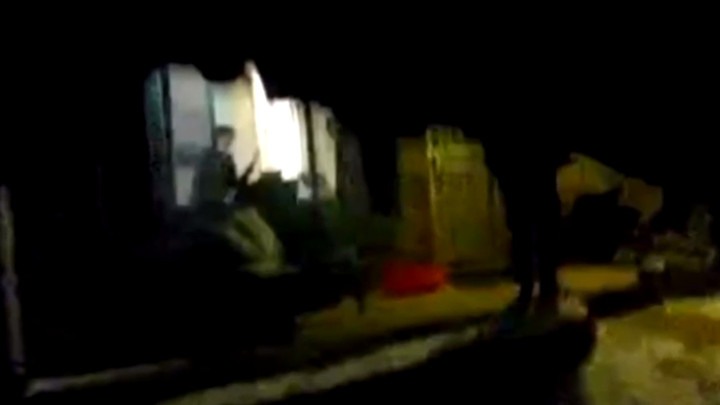 An Aurora police deputy chief confirmed Friday that officers did not announce themselves as police in the moments before they shot an armed man through front window of his home, but that Andrew Huff knew they were cops when he grabbed a gun.
Aurora Police Department

AURORA, Colorado -- An Aurora police deputy chief confirmed Friday that officers did not announce themselves as police in the moments before they shot an armed man through front window of his home.

Still, deputy chief Paul O’Keefe insisted during a Friday news conference the man, Andrew Huff, knew they were cops when he grabbed a gun.

But Huff’s parents, who were waiting for media outside the Aurora police headquarters after the news conference, said the police department was lying and that their son thought the person on his lawn was a former roommate with a grudge.

“They are not telling the truth,” Huff’s mother, Christine McGhee, said Friday.

O’Keefe held a news conference to discuss three incidents in the past two months where people died or were injured after police interactions. He revealed little new information, saying district attorneys continued their investigations.

The three cases discussed were the Aug. 24 arrest of Elijah McClain, the Oct. 10 shooting of Andrew Huff and the Oct. 20 shooting by police of a man they have yet to name. McClain died in a hospital six days after his arrest, and both men injured in shootings remained in serious condition Friday.

Aurora police on Friday were able to clarify that the bullet that struck the unnamed man in the Oct. 20 shooting was fired by an Aurora police officer. Last week, police were unsure whether the man had been injured by police or another person on the scene at an apartment complex on 9000 block of East 14th Avenue. The man is expected to survive, O’Keefe said.

O’Keefe also clarified that officers who responded to Huff’s home Oct. 10 did not announce themselves as Aurora police officers before firing at Huff through the window.

“We are able to say with a fairly high degree of certainty that Mr. Huff knew it was the police who were at the residence at the time that he went and got the long gun,” O’Keefe said.

O’Keefe later said he couldn’t say what specific facts led him to that conclusion because the investigation into the shooting continues.

“Once that case is fully reviewed by the district attorney’s office the specific details of how we believe that to be true will come out,” O’Keefe said.

Huff’s parents told reporters after the police news conference that their son would never grab a gun if he knew police were outside, especially because Huff’s wife and young daughter were in the home.

Huff was released from the hospital last week, but soon returned to doctors’ care after infection spread from the gunshot wound, his parents said. Huff underwent surgery Friday and remained in the intensive care unit.

Aurora police have not released body camera footage in any of the cases and O’Keefe said prosecutors in both the 17th and 18th judicial districts told them not to do so.