Chicago police on Tuesday announced their latest arrests for illegally selling guns and drugs through private Facebook groups — and again complained that the social media platform has not been cooperating with the department’s ongoing investigation. 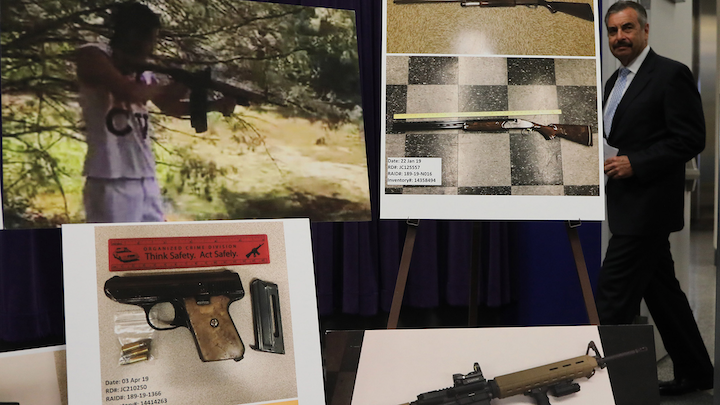 CHICAGO — Chicago police on Tuesday announced their latest arrests for illegally selling guns and drugs through private Facebook groups — and again complained that the social media platform has not been cooperating with the department’s ongoing undercover investigation.

“Facebook claims to monitor these groups, but CPD detectives have labeled these private hidden sites as a version of the dark web that’s more accessible for everyday users,” First Deputy Superintendent Anthony Riccio said at a news conference.

Officers infiltrated seven Facebook groups recently and made 147 undercover purchases, he said. A total of 65 people were identified in the groups, 53 of them now in custody and two being sought in arrest warrants.

The groups are not searchable or visible like public ones on Facebook. A user already in a secret group must invite another user to join.

Riccio complained that Facebook removes undercover officers’ profiles when they discover they are fake but allows people using their real profiles to participate in illegal activity, Riccio said. While Facebook did agree to remove the groups that police found, it did not block members of the groups, citing privacy concerns, Riccio said.

A representative of Facebook acknowledged that it does require law enforcement authorities, like everyone else, to use their real names.

The website uses “proactive detection technology” to take down such content, even from private groups. The company’s “law enforcement outreach and law enforcement response teams” have responded to law enforcement around the world, including engaging with the Chicago police to educate the department on Facebook’s policies and best practices for investigations.

“We’ve had productive conversations with Mayor Lightfoot’s office about promoting public safety in Chicago and look forward to continuing them,” Pollack said. “We remain ready to quickly respond to valid legal process from the Chicago Police Department in order to prosecute those who break the law and refer any matters involving credible threats to prevent harm.”

Chicago police became aware of the secret Facebook groups in 2017, when officials announced 50 people had been arrested and 18 guns seized through the platform. Detectives also found that people were using Facebook’s encrypted messaging service to make sales.

The latest operation included an arrest Monday of a 27-year-old man who had been arrested during that 2017 operation, Riccio said. Thomas Lucas, of the Logan Square neighborhood, pleaded guilty back then and was given probation. He went right back on Facebook to continue selling heroin — even using the same name, Riccio said.

“Offenders are emboldened by the privacy afforded by Facebook,” he said. “This has created a thriving market.”

Another suspect, Joel Casarez, in Chicago on parole from Texas, allegedly sold officers an assault rifle with a 30-round magazine. He posted a video on Facebook of himself firing the gun into a bush. After selling the rifle, he fled and is believed to be back in Texas. A warrant was issued for his arrest, Riccio said.

Interim Superintendent Charlie Beck noted that the latest arrests come just as the city passed a “sobering milestone” last week: 10,000 illegal guns seized by officers and turned in by community members. That’s more guns than seized so far this year in Beck’s hometown of Los Angeles and in New York City.

“It very clearly illustrates the magnitude of the gun problem here in Chicago,” Beck said. 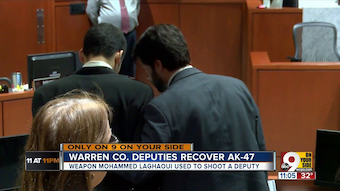 More than a year and a half later, a gun used to shoot a deputy in June 2016 has been recovered from a pond in Landen, according to the Butler County Sheriff's Office.
Jan 29th, 2018
Forensics

What if we could see the gun in the powder left behind?

Houston ATF Underfunded and Under the Gun

It is not a secret that the agency has drawn plenty of enemies as it has gone up against street gangs, militia members and outlaw bikers.
Nov 29th, 2013
Firearms

According to police, Tawana Bourne was arguing with another woman at the children's restaurant.
Feb 6th, 2013 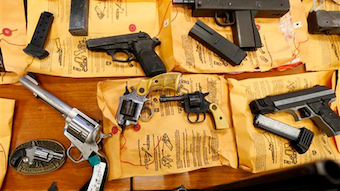 A total of 76 firearms were seized and 405 arrests were made thanks to a joint effort by more than a dozen law enforcement agencies in Northern New Jersey.
Dec 5th, 2012
Investigations

Officials say a spare ammunition magazine that a New York City police officer was carrying may have saved his life when he was shot by a gunman early Monday.
Feb 28th, 2012 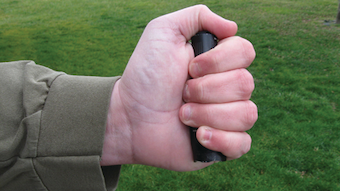 I decided that I needed a small high output flashlight that I could tuck away and have available at all times. The intent of getting this light was so that I could lend a good, high output light to my co-workers.
Max Schulte
Feb 24th, 2012
Ballistic Identification

Defending Your Lineup in Court

Armed with headlining DNA exonerations and new research, defense attorneys have a new arsenal for attacking police lineups. Are you ready to do battle in court?
Val Van Brocklin
Jul 18th, 2011