Two officers suffered minor injuries Friday after a 23-year-old Macomb County man rammed their patrol vehicle with a pickup truck while he broadcast the incident live on Facebook. 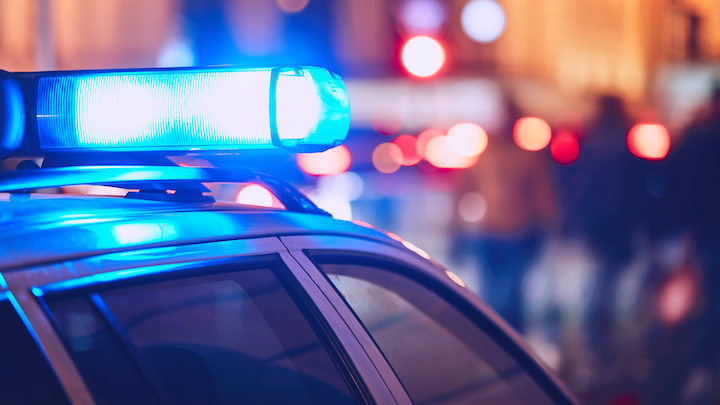 The driver was arrested without incident after the crash on the city's east side, Detroit Police Chief James Craig said Friday. He also said the suspect has a history of mental illness.

"A very senseless act," the chief called it. "A very dangerous act."

Craig made the comments during a news conference held at the department's Fifth Precinct on Conner Street near Mack Avenue, not far from where the event happened.

According to a preliminary investigation, the police first came into contact with the suspect at about 2:30 a.m. at a gas station in the area of 21 Mile and Schoenherr Roads in Shelby Township, officials said.

Craig said the suspect was seen at a BP gas station pouring gasoline somewhere on the property and trying to ignited it. Macomb County Sheriff's deputies tried to execute a traffic stop of the suspect, but it started a car chase. The suspect was driving a red, late model Ford F-150 pickup truck.

"Unknown to the deputies, the suspect was live on Facebook," he said. "My understanding is that he was on live on Facebook for the whole duration of the incident, which lasted about 20-25 minutes."

At some point, Warren police officers became involved in the chase, authorities said. However, police and deputies lost the suspect somewhere in the area of Seven Mile and Hoover Roads.

Craig said a short time later, the suspect ended up on Conner Street near the Detroit Police Department's Fifth Precinct.

"Officers in a marked police vehicle saw the suspect as he passed the precinct at a high rate of speed and weaving in and out of traffic," he said. "He was on Facebook and he was baiting the officers and ridiculing them."

The officer driving was a veteran with 19 years on the force. His partner, who was sitting in the passenger seat, has been with the department for a year. Her airbag did not deploy in the crash, leaving Craig with "some questions for Ford about that."

Police attempted to conduct a traffic stop and turned on their vehicle's sirens, according to officials. The suspect then made a U-turn and started traveling towards the officers at a high speed as if to crash into them head on, they said.

"It was a very high-risk situation," Craig said. "The officers were quick-thinkers and the officer driving turned their vehicle in such a way to not be a frontal impact. But because of the speed the suspect was traveling, he did make contact with the police vehicle. Fortunately, the chief said, there wasn't as much damage or injury to the officers as there could have been."

The suspect's truck crashed into the front passenger fender of the officer's vehicle, a 2018 Ford Explorer. The crash happened in the area of East Jefferson Avenue and Eastlawn Street, according to police

"But that's not where it stops," Craig said. "After the collision, the suspect left the scene, went a short distance and reappeared while officers are trying to figure out what had just happened."

The suspect pulled up behind the police vehicle. The officers then exited their vehicle, approached the suspect's vehicle, got him out of it and took him into custody without incident, the chief said.

Police said the suspect will likely face a host of charges, including felonious assault of an officer.

"It could have been a very tragic situation," he said. "What would we be saying if both officers had made the ultimate sacrifice as a result of this?"

Craig praised the officers for showing tremendous courage and restraint in the incident.

He also called the suspect's broadcasting of the entire incident on Facebook live "troubling."

"I'm told he was pretty much boasting about baiting the different police agencies," he said.

Furthermore, the chief blasted people who watched the suspect's Facebook live broadcast and encouraged him.

"I would go as far as saying some people were complicit, encouraging him, applauding him for this senseless act," Craig said. "That's a problem for me."