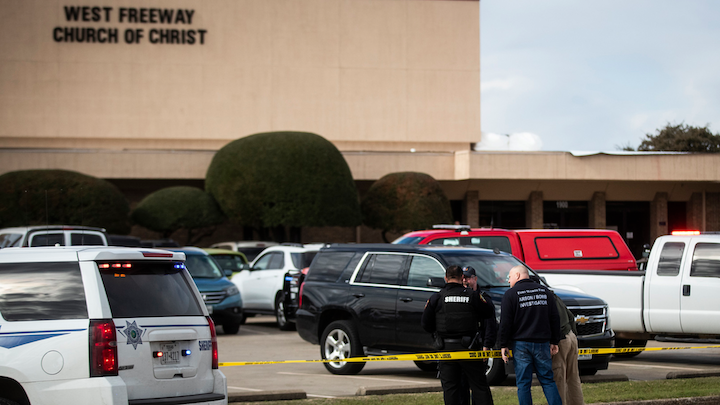 The shooting appeared to happen during communion, according to a livestream video of the service obtained by the Fort Worth Star-Telegram.

A man was standing toward the back of the sanctuary holding a tray when the gunman got up from a nearby pew, walked toward the man and appeared to say something to him.

A man in the back then pointed a handgun at the gunman and fired. The gunman fell, and at least three or four more people armed with handguns walk toward the gunman.

“By the sequence of events it should be assumed that he came in with an idea,” Tinius said.

The gunfire came without warning, said Tinius, who was at the church when the shooting took place. He had never seen the gunman before and could not think of a motive, Tinius said.

Isabel Arrreola, 38, said the gunman sat two feet behind her and her 7-year-old daughter.

His beard and the hair on his head looked fake, and he made her uncomfortable, Arreola said. She noticed him from the moment that he sat down, Arreola said.

Arreola said she could tell that one of the members of the security team was concerned about the shooter because he sat in the back right near him.

“They saved us,” Arreola said. “Unfortunately, two men lost their lives while they were doing so.”

Arreola said she couldn’t concentrate when the man was sitting behind her. She and her husband decided they would move to the other side of the church after communion, Arreola said.

“I should have listened to my gut,” Arreola said. “While he was there I couldn’t sing. I couldn’t pray. There was just something not right about him. But at the same time I thought that maybe I was being too hard.”

One of the victims died at the scene. The other was taken to a hospital in critical condition and died later, police said.

Two others were treated at the scene for minor injuries after they hit their heads ducking for cover, a MedStar spokeswoman said.

“Had the shooter been able to indiscriminately start firing at the parishioners sitting there in front of him, or at the pastor, we would have had many more lives lost today and had many more serious injuries,” he said.

He said the way the church’s security team handled the shooter will be “studied and watched by law enforcement, private citizens and churches or anyone else who trains in their own security to see how lives can be saved.”

Jeff Williams, a regional director of the Texas Department of Public Safety, also emphasized the significance of the church’s security team’s quick actions.

“The citizens that were inside that church undoubtedly saved 242 other parishioners,” he said.

Authorities did not identify the victims or the gunman. Investigators are trying to determine if the gunman was driven by a specific ideology, said FBI Special Agent in Charge Matthew Desarno. He said the man had an arrest record, but did not elaborate.

He described the shooter as “relatively transient,” but said he had roots in the area.

The Department of Public Safety and the Texas Rangers will lead the investigation.

“Unfortunately this country has seen so many of these that we’ve actually gotten used to them at this point,” Williams said. “I would like to point out that we have a couple of heroic parishioners who stopped short of anything you can even imagine and saved countless lives. Our hearts are going out to them and their families as well.”

A clerk at a gas station across the street from the church said the church has a large congregation but seemed less busy than normal Sunday morning. He said police asked him for the gas station’s surveillance footage, but he did not see much on the video.

“A very tragic day when anybody in our community suffers, whether it’s a community that’s next to Fort Worth or in Fort Worth itself,” Drivdahl said. “Our hearts and prayers go out to all the families affected by this incident.”

Texas Gov. Greg Abbot credited the quick action of those who took down the gunman.

“Our hearts go out to the victims and families of those killed in the evil act of violence that occurred at the West Freeway Church of Christ,” he said in a statement. “Places of worship are meant to be sacred, and I am grateful for the church members who acted quickly to take down the shooter and help prevent further loss of life. Cecilia and I ask all Texans to join us in praying for the White Settlement community and for all those affected by this horrible tragedy.”

Said Tarrant County Sheriff Bill Waybourn: “Today evil walked boldly among us. Let me remind you, good people raised up and stopped it before it got worse.”

A 2017 state law allows churches to hire armed guards. A law that went into effect in September allows licensed handgun owners to bring their firearms to church as long as the church does not oppose it.

The law followed an opinion by Attorney General Ken Paxton after the November 2017 shooting at the First Baptist Church in Sutherland Springs that left 26 people dead and another 20 wounded.

Sunday’s shooting came a little more than 20 years after a gunman burst into Wedgwood Baptist Church in Fort Worth and opened fire, killing seven people before he detonated an explosive device and killed himself in front of more than 200 worshippers. 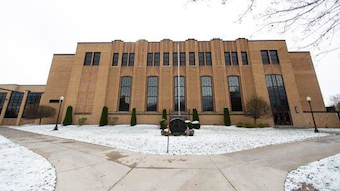