Former Chicago police Superintendent Eddie Johnson, fired earlier in the week for allegedly lying to Mayor Lori Lightfoot about his actions in the hours before he was found asleep behind the wheel of a running vehicle, officially retired on Wednesday. 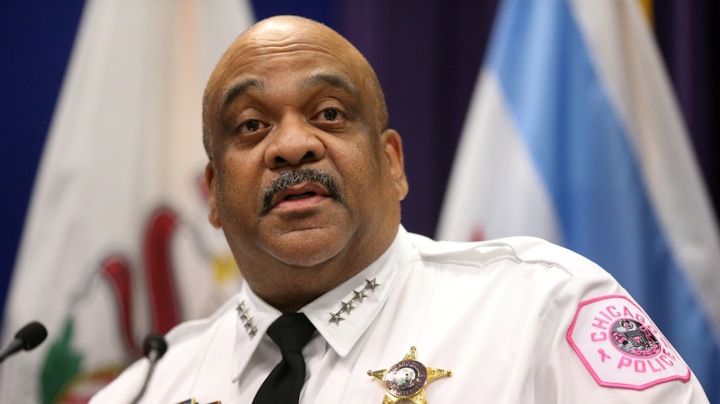 CHICAGO — Former Chicago police Superintendent Eddie Johnson, fired earlier in the week for allegedly lying to Mayor Lori Lightfoot about his actions in the hours before he was found asleep behind the wheel of a running vehicle, officially retired from the department as a lieutenant on Wednesday, according to the mayor’s office.

Lightfoot on Monday had said she was sacking Johnson “effective immediately.” But on Wednesday she acknowledged he hadn’t yet been taken off the department payroll.

Lightfoot said it was her expectation Johnson would “be off the CPD payroll shortly, and certainly no later than the end of this week,” she said after giving a keynote address at Bradley University in Peoria Wednesday.

As the superintendent, Johnson had served at the pleasure of the mayor. By removing Johnson from the $260,044-a-year position, Lightfoot automatically demoted him to lieutenant, his career service rank before becoming a member of the Police Department’s command staff.

As a lieutenant, per city ordinance, Johnson could only be fired by the Chicago Police Board, the city’s nine-member police disciplinary panel. But in Johnson’s case, the city never filed administrative charges against him, said Max Caproni, the board’s executive director.

“We have been informed that effective today, Mr. Johnson retired from his career service rank and is no longer employed by the Chicago Police Department,” the mayor’s office said in a news release.

Johnson was fired from the department’s top job over his response to an October incident when police officers found him asleep in the driver’s seat of a running vehicle near his Bridgeport home. Johnson initially blamed his behavior on a change in medication, later admitting to Lightfoot that he had a couple of drinks that night.

Sources have told the Chicago Tribune the superintendent had been drinking for a few hours with a woman who was not his wife. The woman was a Chicago police officer and a member of Johnson’s security detail, sources said.

Lightfoot cited a report by the city’s inspector general on Monday when she announced Johnson was being axed, saying she “saw things that were inconsistent with what Mr. Johnson had told me personally and what he revealed to members of the public.”

Asked whether the full inspector general report on Johnson will be released, Lightfoot said she doesn’t “want to get ahead of ourselves.”

On Nov. 7, Johnson announced his plans to retire at the end of the year in a news conference attended by Lightfoot. The mayor’s move to dismiss Johnson, which she said was “about integrity and accountability,” moved up those plans.

“He is the head of the second largest police force in the country,” Lightfoot said on Wednesday. “After reading the investigative report from the IG and from looking at the evidence, it became clear to me that the things he had told me about his conduct weren’t consistent with what the facts were, and I thought that was absolutely essential that I take this act.”

Lightfoot said she’s “hopeful” the city will see a lot of applicants for the police superintendent position through a nationwide search.